Dragonfly is a drone set to land on Titan in the mid 2030s. As I've read, Saturn - and thus, Titan - won't be in the right orbital position at the time to allow for direct contact with the drone if it was located in the polar regions, i.e. where most of Titan's lakes are. From the Science Mission Profile section of the original proposal document linked below:

Arrival at Titan in the mid-2030s with DTE (direct-to-Earth) communication suggests a low-latitude landing site. This requirement means a similar location and season to the Huygens descent in 2005, so the wind profile and turbulence characteristics measured by the Huygens probe are directly relevant.

As such, among other reasons, it will be exploring the equatorial region - starting in the landing site, Shangri-La - with the baseline target being Selk Crater.

I've annotated a map of Titan and included it below. 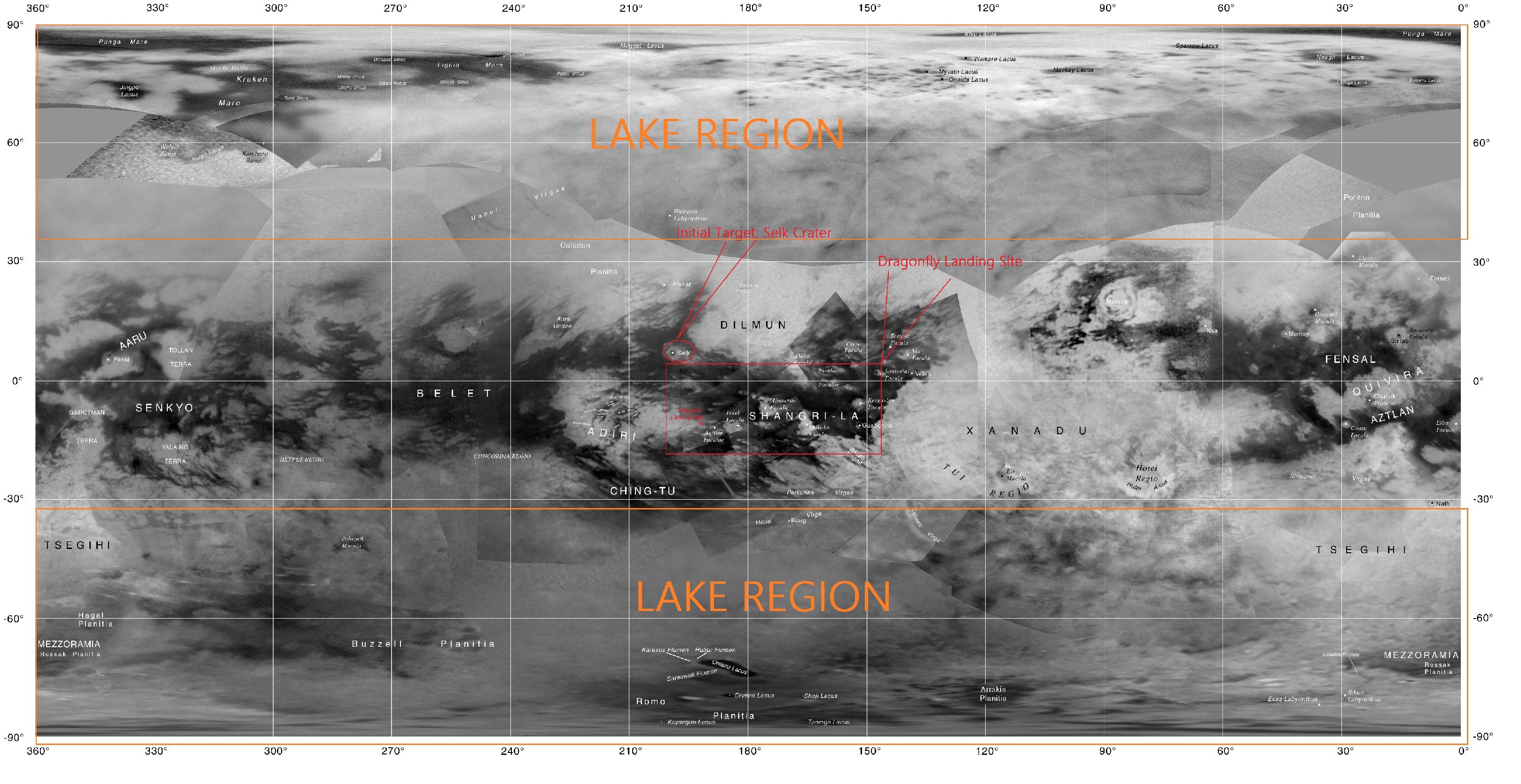 As can be seen, the landing site isn't too close to the lakes. As such, my question is thus: would it be possible for the Dragonfly drone to, after reaching Selk Crater and completing its primary mission, then begin an extended mission to traverse the surface of Titan to reach one of the lakes in this region, or perhaps a closer lake?

This would depend on how much power the RTG will have over the course of the mission, since the power it generates slowly decreases over time and thus determines the lifespan and ultimate maximum range of the drone. I can't seem to find any guesses on the total EOL or BOL power of the future RTG provided for the mission, although the original proposal document gives a battery size of 14 kWh (best case.)

According to your linked document Dragonfly will use a Multi-mission radioisotope thermoelectric generator or MMRTG:

The MMRTG design incorporates PbTe/TAGS thermoelectric couples (from Teledyne Energy Systems), where the TAGS material is a material incorporating Tellurium (Te), Silver (Ag), Germanium (Ge) and Antimony (Sb). The MMRTG is designed to produce 125 W electrical power at the start of mission, falling to about 100 W after 14 years. With a mass of 45 kg the MMRTG provides about 2.8 W/kg of electrical power at beginning of life.

The MMRTG design is capable of operating both in the vacuum of space and in planetary atmospheres, such as on the surface of Mars. Design goals for the MMRTG included ensuring a high degree of safety, optimizing power levels over a minimum lifetime of 14 years, and minimizing weight.

The MMRTG uses plutonium-238 with a half-life of 87.7 years which is a mean life (1/e) of 126.5 years. That means that after 14 years the radioactive and therefore thermal activity of the plutonium itself will drop to 89.5% of it's original value.

The quoted 14-year drop (125 W to 100 W) is 80%, so it looks like there may be other sources of degradation being taken into account besides the radioisotope itself. The semiconductor material used to make the thermoelectric conversion is one possibility.

While the decay of the radioisotope is exponential (which means it never goes to zero) other sources of degradation may drop linearly or even accelerate, so we can't extrapolate in a simple way beyond 14 years.

Flight performance analysis14 suggested that the maximum-range speed (Fig. 4) would be about 10 m/s, and that flight power for a representative 420-kg vehicle at this speed would be a little over 2 kW. A 30-kg battery at 100 Wh/kg could theoretically permit flight for 2 h and achieve some 60 km in range. In practice, battery performance would be heavily margined for safety and performance would be lower.

Figure 4. Rotorcraft power curve for a representative vehicle mass of 420 kg on Titan. The induced power required for rotor thrust falls toward higher speed, whereas the body drag increases quadratically and eventually dominates. These competing factors define the maximum endurance speed (the minimum in the curve ~8 m/s) and the maximum-range speed (where the tangent to the curve passes through the origin, corresponding to ~10 m/s). Titan’s dense atmosphere and low gravity means that the flight power for a given mass is a factor of about 40 times lower than on Earth. 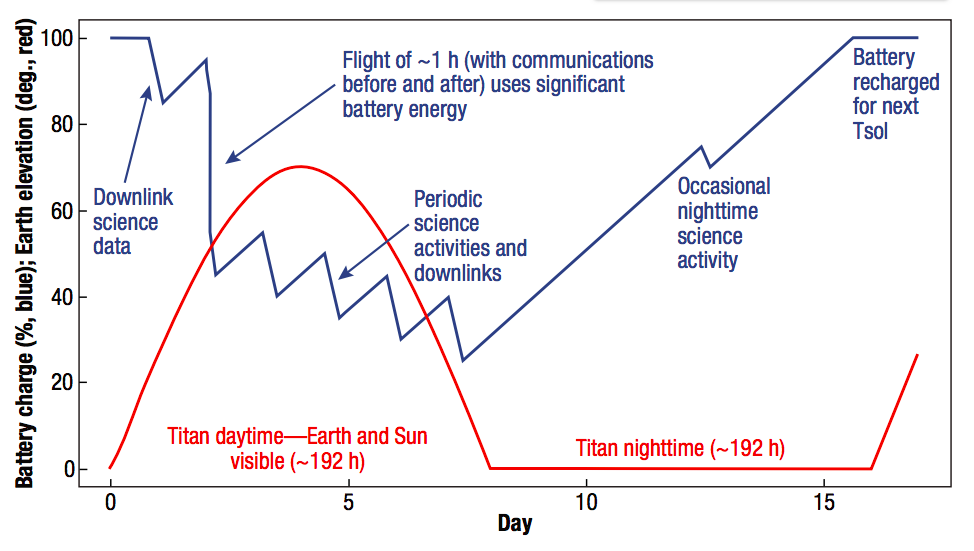 Figure 7. Energy management and communication concept of operations. MMRTG continuously recharges the battery, but downlink and especially flight demand significant energy. Activities can be paced to match MMRTG in situ capability while maintaining healthy margins on the battery state of charge.

Figure 7. also suggests roughly 2 hours of flying per "day" which is about 16 Earth days, followed by a slow recharge.

Except during polar summer or winter, operations of a lander on Titan with DTE communication are paced by the Titan diurnal cycle. A Titan solar day (Tsol) is 384 h long (16 Earth days). Seen from Titan, Earth in the sky is always within 6° of the Sun. Interaction with Earth, and logically any operations requiring real-time observation (such as atmospheric flight), occur during the day, and nighttime activities are generally minimal and power can be devoted to recharging the battery. Thus, a logical maximum size of the battery is that which completely captures MMRTG power during the Titan night, or 75*192 = 14 kWh. Such a battery—about a quarter of the size of the battery in a Tesla electric car—would be rather massive (140 kg), assuming a representative specific energy metric for space-qualified batteries of 100 Wh/kg. In practice, a smaller battery may be chosen, sacrificing some energy-harvesting efficiency for lower mass and cost.

This is a much shorter time than the MMRTG's shelf life, so that should not be a consideration.

There are of course a variety of dangers to face and things that can go wrong along the way (see for example How quickly might a Titan rover or drone get covered in oil and dirt? Will it need windshield-wipers?), and that would make an excellent next question!

Not the answer you're looking for? Browse other questions tagged titan saturn rtg dragonfly or ask your own question.

9
What is the pop-up circular disk with spiral pattern in this NASA animation of the Dragonfly helicopter for Titan? Antenna? Kind, band, target?
11
Which wears out faster on RTGs; the R's or the TG's? (the radioisotopes or the thermocouples)
8
How quickly might a Titan rover or drone get covered in oil and dirt? Will it need windshield-wipers?

1
Titan's interior
6
What would a "water" landing on Titan be like? How viscous is the liquid?
12
Why are Titan's lakes "black" in radar images rather than transparent?
1
Does the Dragonfly project (quadcopters on Titan) envision attached RTG's or would they be static and revisited for charging?
6
How will Dragonfly (mission to Titan) keep from flipping over?
4
Can we observe the Titan's surface from its orbit?
7
How can they be so sure that Dragonfly will "freeze to death" as opposed to simply (and eventually) running out of RTG power? (238Pu decay)
9
What is the pop-up circular disk with spiral pattern in this NASA animation of the Dragonfly helicopter for Titan? Antenna? Kind, band, target?