Why do rocket engines use nitrogen actuators to operate the fuel/oxidiser valves instead of electric servos?

Why do rocket engines use nitrogen actuators to operate the fuel/oxidiser valves instead of using electric servos?

To produce a valve operating electric motor involves a very large number of parts to turn high speed low torque continuous rotary motion into short limited throw high torque motion. Every one of these parts is a potential failure that needs to have time and money spent to investigate and mitigate. They are also hard to test once fitted since once tank is loaded the motor and related sensors cannot be operated/tested so can seize, bind, short circuit or otherwise misbehave.

Gas driven systems can have as few as one moving part, two if you count the working fluid. Supporting hardware generally consists of a pressure vessel of some kind, and as long as this still indicates pressure valve can be assumed to be ready to operate, simplifying go-nogo checks before launch and during flight. It also also relatively easy to supply redundancy to everything but the final valve assembly.

There are problems in terms of weight and flexibility but where 100% reliability is a goal using gas driven systems, like open loop hydraulics can make sense.

I'm not convinced that they (all) do. This other answer mentions a use case were open-loop hydraulics can be useful. I can also imagine some cases where you don't want to use electronic signals due to potential sparks with nasty consequences.

However, I found this report evaluating pneumatic actuators versus electric torque motors for the new shuttle Orbital Maneuvering System. They reference specifically the problems encountered in the Apollo program (see table 4-1 on page 4-2, which is too big to paste here). The following table summarises the findings. 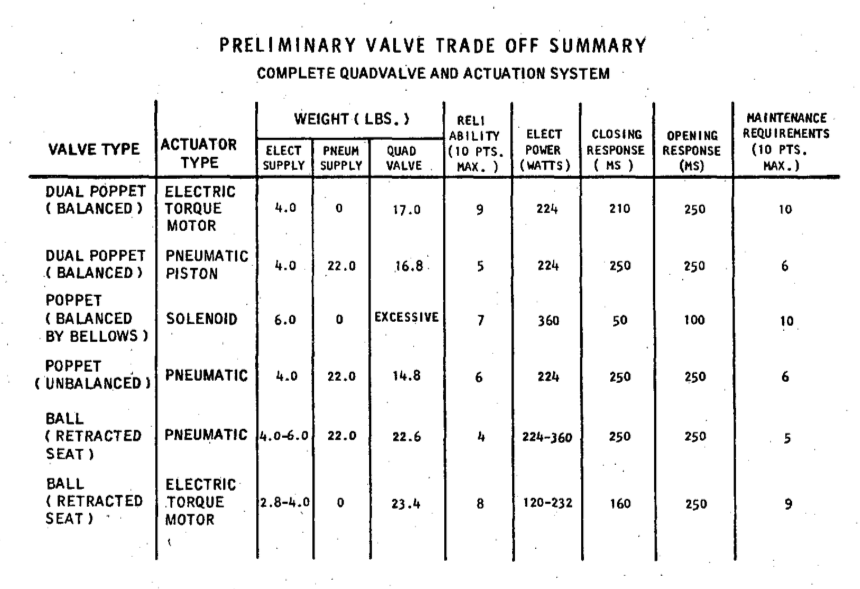 Based on the data presented in Table 4-VII it was concluded that the two electric torque operated concepts (the dual poppet valve and the ball valve with a retracted seat) where the most promising concepts for the OME valve and actuation system application. Not only were they more than 30% lighter than the nearest pneumatically operated concept but they were also considered substantially superior from the point of view of reliability and maintenance requirements.

It is possible that pneumatically operated valves have some advantage that is not evaluated here, and I'm still searching for other analyses for other uses cases to support that.

Not the answer you're looking for? Browse other questions tagged fuel-system or ask your own question.

35
Why does the Falcon 9 consume hydraulic fluid?

22
How was fuel crossfeed achieved, between the main tank and the Shuttle?
5
With pressure-fed engines, is any measurable thrust generated by venting the pressurant out the engine bell after flameout?
22
Is Asparagus Staging Possible
6
Why can’t cryogenic propellants be storable, at least on the ground, via refrigeration?
14
Why is the Space Shuttle's External Tank fuelled through the Orbiter's main engine plumbing system?
4
Bio-Fuel for Rocket Science
5
What was the influence of the military in the decision to use kerosene as fuel for LOX?