Did SpektrRG make a “u-turn”, and how does this ground track remain a steady 6° above the equator?

The second (crucial) engine firing of the Block DM-03 stage in today's #SpektrRG launch to come in an hour, when the spacecraft almost completes its first orbit around the Earth. Here is my estimate of the ground track: https://t.co/GC8WmAMGct 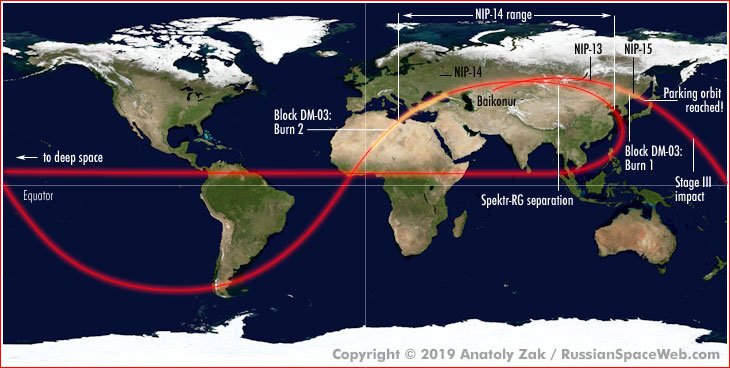 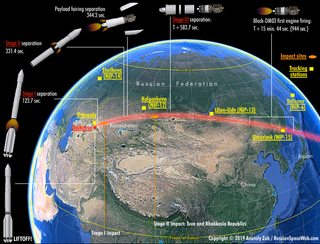 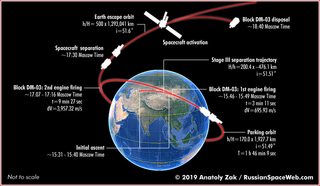 Why does it look like SpektrRG makes a u-turn in the ground track image?

An L2 injection trajectory looks a lot like going straight away from Earth -- i.e. the ground-track position in inertial space is changing only slowly. Meanwhile, the Earth is rotating Eastward underneath that point, so the ground track appears to move Westward across the surface of the Earth.

How does it manage to orbit the Earth at a steady 6 degrees above the equator?

It's not orbiting around the Earth; it's going almost straight away from a point 6 degrees above the Equator.

Compare the "DM-03 Burn 2" and "Spacecraft Separation" checkpoints on the ground track against the same checkpoints in your lower right image.

¹ Remember to add Earth radius to the given orbit altitudes.

Not the answer you're looking for? Browse other questions tagged orbital-mechanics russia spektr-rg or ask your own question.

5
How much harder is it to land on the Moon away from the equator and the poles?
5
How are impact probability maps rigorously calculated?
10
Is this a photo of today's Soyuz anomaly happening in flight seen from the ISS? What are the little dots?
1
How to calculate the radii of high orbits above the parallels of 45 and 80 degrees?
3
Bucket loop between Earth and Moon?