Stanley Kubrick used a NASA-inspired lens to film by candlelight in Barry Lyndon, but what did NASA use it for?

At 07:35 in the CinemaTyler video How Kubrick Achieved the Beautiful Cinematography of Barry Lyndon he says:

As far back as 2001: A Space Odyssey, Kubrick and Alcott had been talking about the idea of shooting night interiors exclusively by candlelight. Kubrick had wanted to shot by candlelight for a film on Napoleon he was researching.

At the time, there wasn’t a lens fast enough to get a decent exposure in such low lighting conditions. The lens they ended up finding for Barry Lyndon was a Zeiss f/0.7 50 mm lens that was developed for NASA to take pictures of the dark side of the Moon (American Cinematographer). I spoke about this lens in another video that I have linked to in the description.

Perhaps the most famous of Kubrick’s lenses is the Zeiss Planar 50 mm f/0.7 lens by Carl Zeiss.

This lens was used on the interior scenes for Barry Lyndon. And in some scenes the interiors were only lit with candle light. This would have been impossible to capture on motion picture film as there didn’t exist a motion picture lens to capture a proper exposure in such low lighting conditions.

Kubrick, delightfully stubborn as he was, decided to adapt a lens that had only been used by NASA at that point… Kubrick had eh lens “redesigned by Cinema Products” so that it would work with his “Mitchell BNC 35 mm camera” (Kubrick Exhibit).

From Lenses at the Kubrick Exhibit in San Francisco 23 June 2017: 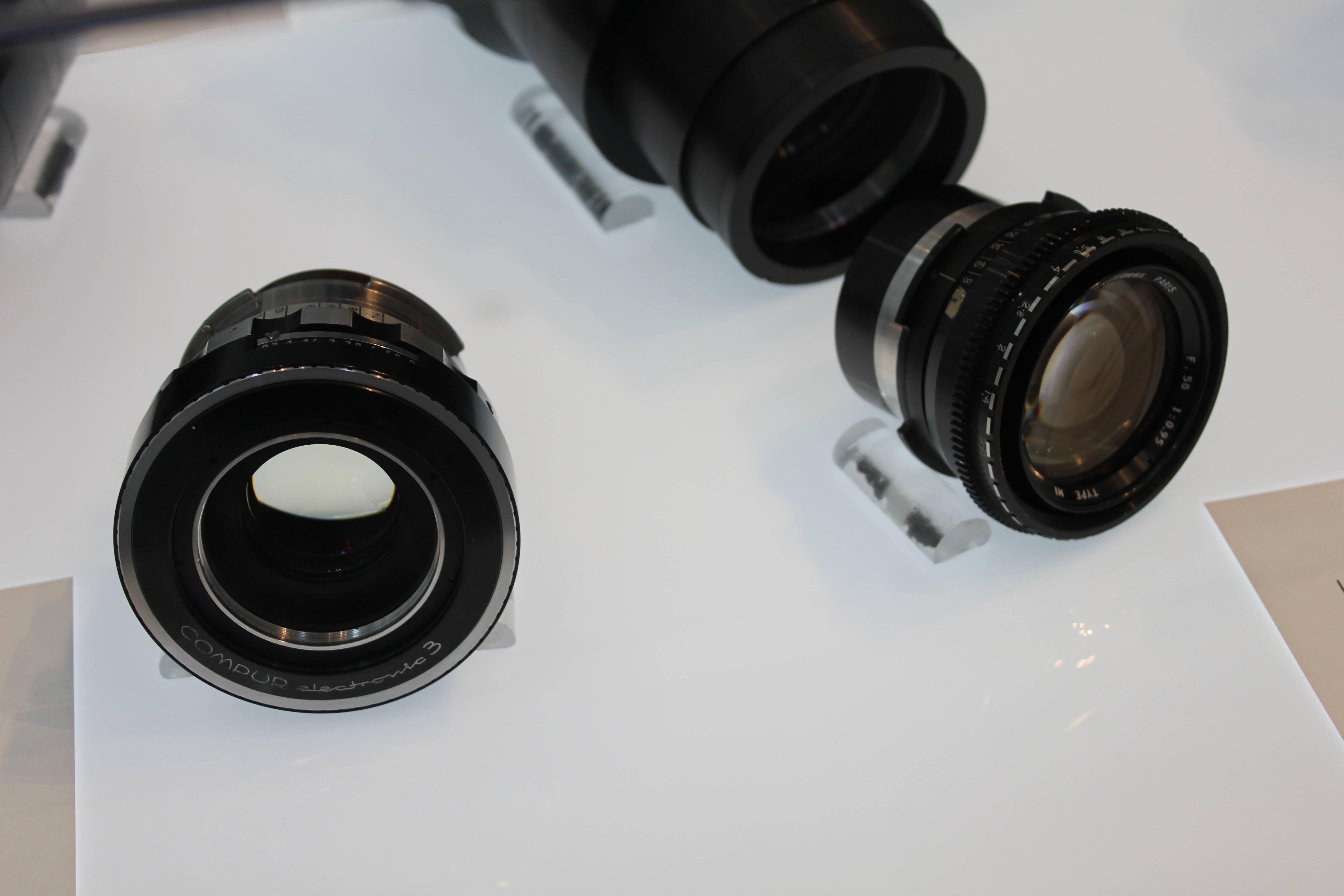 In order to shoot the interior scenes for Barry Lyndon by candle light, Stanley Kubrick had a special lens by Zeiss redesigned and adapted. Initially, such Zeiss f/0.7 lenses had been used during NASA space flights. With a maximum aperture of 0.7 (indicating the relation between the focal length and the diameter of the maximum aperture) it was about two stops faster than the available high speed lenses at that time. This made shooting by candlelight without additional lighting fixtures possible. The lens was mechanically redesigned by Cinema Products, USA, in order to fit Kubrick’s own Mitchell BNC 35mm camera. 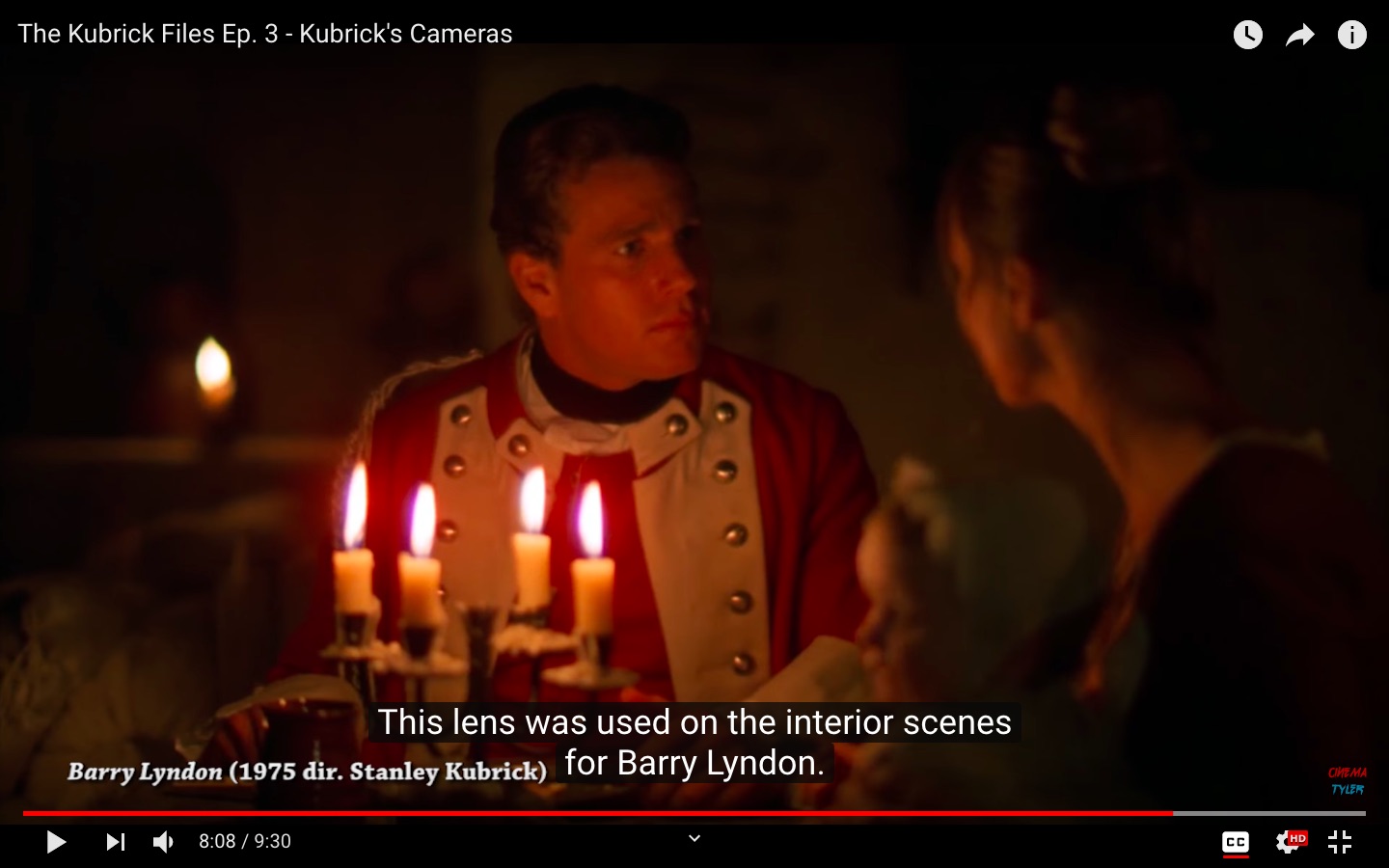 This isn't a complete answer, but I think there should be at least some doubt cast on this story: it's certainly not as clear as a lot of people think it is.

The Wikipedia entry for this lens claims that it was developed in 1966.

So we can wonder what it might have been used for. It is generally claimed that it was used (or designed) for pictures of the Moon's night side, and that makes sense to me. If so, it was not going to be useful from LEO, because it's way, way too short. So if indeed it was used for lunar night side photography it must have been used from Lunar orbit (see below for why not on the surface).

The first candidate is the Lunar Orbiter programme, which surveyed the Moon in 1966 & 1967. But:

(From the above Wikipedia page.). So, not Lunar Orbiter. (Incidentally, if you don't know about Lunar Orbiter: it was an amazing thing which processed film in space!)

This seems to be a good reference for the cameras and lenses used during the Apollo program and I have not been able to find any evidence that this lens was used. If it was used it would have been in one of the survey systems from orbit I think, because there's just no purpose to a lens that fast on the surface (focussing an f/0.7 lens while wearing a spacesuit would be ... interesting, not to mention that they did not land during the lunar night). But some of the links to details of the survey stuff are broken. It's kind of a short lens to be using from orbit though, unless they wanted pretty broad surveys (which perhaps they did).

Another possibility is that it was designed for pictures of Earth's night side. That's possible, and would allow a much broader range of missions (in particular pretty much all manned missions in era, and many unmanned ones as well). I have not investigated this option.

I can find no good evidence of it from any kind of NASA site.

So my best guess is: NASA commissioned this lens but never used it. But that's just a guess. What is clear is that evidence for the general consensus that it was developed for (and perhaps used by) Apollo is at least sparse.

I would be delighted to be shown to be wrong based on non-apocryphal evidence!

This answer is based on the AFC article Remember 50 years ago… A famous lens made by Angénieux...

It can be confirmed in the article titled 31 July 1964: 50 Years ago, the First Close-up Images of the Moon in the Angeneaux AngeNews 2015 The Art of Optics | 2nd edition | February 2015 | FREE | www.angenieux.com and also filmanddigitaltimes.com's Angenieux Ranger - 50 Years.

It confirms @tfb's answer's and my answer's suggestion that the extremely fast lenses needed to take images of the sunlit side of the Moon rather than the dark side, because these orbits took the cameras extremely close to the surface for higher resolution imaging, and very fast exposures were required to avoid blurring.

It's likely the story about photographing the dark side of the Moon is not correct, and was invented as an explanation for the very fast lens by someone not fully appreciating the speed of an orbiting spacecraft.

Ranger 7 was the first US space probe to successfully transmit close images of the lunar surface back to Earth. It was also the first completely successful flight of the Ranger program. Launched on July 28, 1964, Ranger 7 was designed to achieve a lunar impact trajectory and to transmit high-resolution photographs of the lunar surface during the final minutes of flight up to impact. Ranger 7 reached the Moon on July 31, 1964.

The three cameras positioned on the bottom row were fitted with the Angenieux 25mm f:0.95 M1 lenses ( for wide-angle shots) inside specially modified housings, while the top 3 cameras were fitted with the same B&L 76mm f2 Super-Baltar lenses that were used in the Ranger 6 mission (for narrow-angle shots). The 25mm Angenieux wide angle lenses were added to the package for Ranger 7 and following Rangers, meaning that basically the three successful and celebrated missions of the ranger program all used the Angenieux lenses, while the earlier six (failed) missions did not.

Ranger 7 photographed its way down to target in a lunar plain, Mare Cognitum, south of the crater Copernicus. The full-scan camera system began transmitting pictures at 1308 UT on July 31, 1964, 17 min 13 sec prior to impact. The partial-scan system initiated transmission of pictures at 1312 UT, 13 min 40 sec prior to impact. The last full-scan transmission occurred between 2.5 and 5 sec before impact, while the last partial-scan picture was taken between 0.2 and 0.4 sec before impact and achieved resolution to 0.5 m. Image motion is more severe in the last pictures. The experiment returned 4308 photographs of excellent quality, 1000 times better than from the best telescopes from Earth. 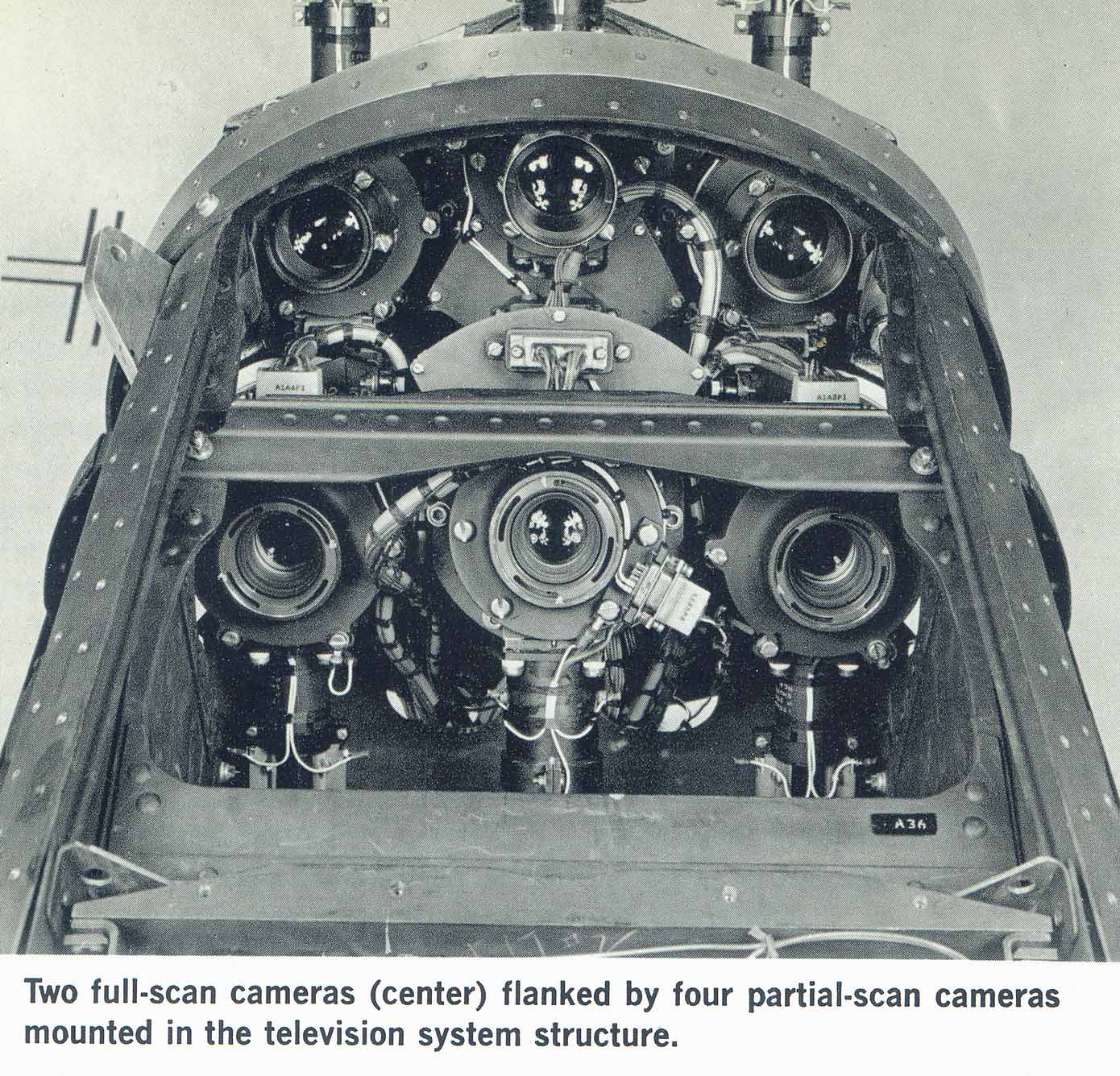 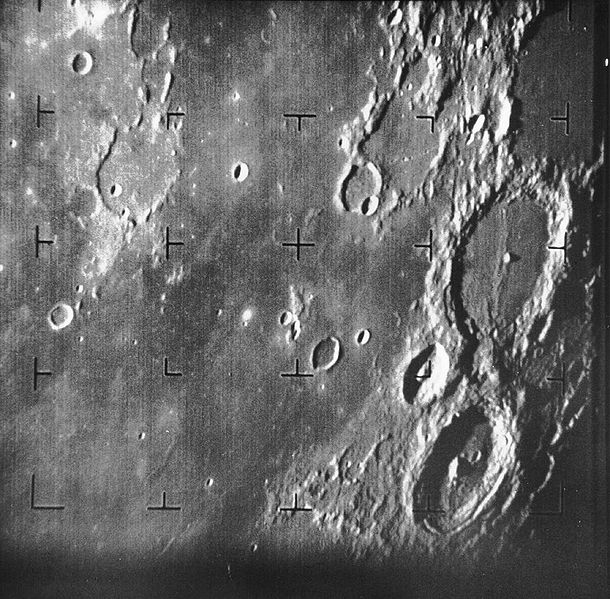 tl;dr: I can't conclude that the lens wasn't used (as @tfb's excellent answer doesn't yet conclude either) but it does seem reasonable that NASA would have gotten a hold of several of the fastest lenses in the world just in case they might have come in handy.

From the various documents available at https://www.lpi.usra.edu/resources/ranger/ the Camera "A" series used f/1.0 lenses and exposure times of 5 ms (1/200 sec) and 2 ms (1/500 sec). The image sensor was a special vidicon tube that retained the charge image for at least several seconds to allow for a slow-scan read out direct to broadcast to Earth via a low bandwidth transmission, where it was recored directly to film.

The short exposure times were needed because the Rangers were on an impact trajectory and needed to record at very close distances.

There was no attempt to photograph the "dark side" or night side of the Moon using Earthshine for illumination.

One-inch-diameter vidicons are used for image sensing. Electromagnetically driven slit-type shutters expose the vidicons. The image is focused on the vidicon target through the shutter, which is placed slightly in front of the focal plane. The vidicon target is made up of a layer of photoconductive material, initially charged by scanning with an electron beam. The image formed on the photoconductive surface causes variations in resistance across the surface which are a function of the image brightness. These variations allow a redistribution of the charge which remains after exposure. In the Ranger cameras, the charge pattern formed by the image on the photoconductor remains much longer than in commercial systems, so that the pictures may be taken more slowly. By slowing down the picture-taking rate, it is possible to use a narrow electrical bandwidth, which simplifies the communications problem in transmission of the signal to Earth. After the image has been formed on the photoconductor by operation of the shutter, an electron beam scans the surface and recharges the photoconductor. The variation in charge current is the video signal, which is then amplified several thousand times and sent to the transmitter, where the amplitude variations are converted to frequency variations. The frequency-modulated signal is amplified, and the signals from the two channels are combined and transmitted to Earth through the spacecraft high-gain antenna. 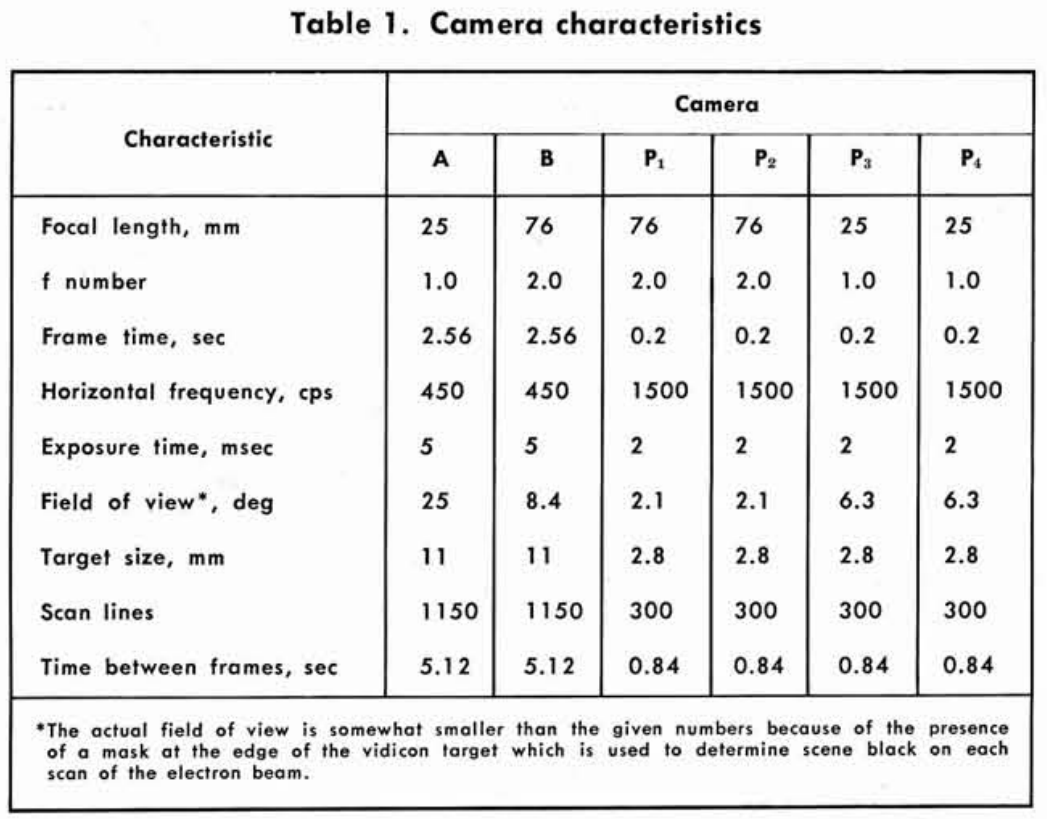 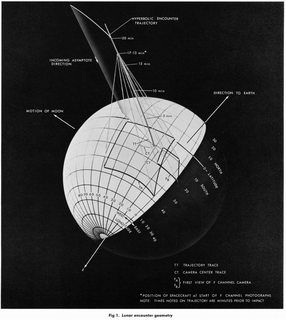 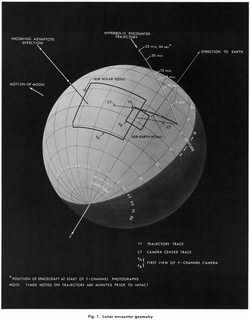 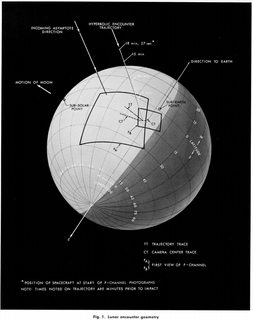 As discussed in @tfb's excellent answer the Lunar Orbiters did not require absurdly fast lenses, most likely because they were in nice orbits around the Moon rather than being in the process of crashing into it.

Using the same data and Python script used in this answer for at least Apollo 12 and 14 it looks like the angle between the Sun and Earth was about 50 degrees, which means only 50 of 360 degrees of longitude would be night time but illuminated by Earthshine.

Bringing a special camera lens to photograph it and holding the camera steady enough to take scientifically meaningful photographs illuminated by Earthshine seems like an idea that would be worth thinking about and possibly ordering some lenses, but probably not following through with.

Its story is a fascinating read, in the form of a longist Italian article. Translated by Google here.

The plot is full of twists:

The engineering looks eloquent to me. The key idea is to make a supersized 70mm f/1 that lights a much larger image circle, and then design a “condenser” that brute-forces your way to 50mm f/0.7 by shortening the focal length and condensing the light. Basically it’s adding a 0.7x teleconverter that gives 1 f-stop. (Boy, I really wish Nikon/Canon made these for FF lenses on crop bodies.)

I can't conclude that the lens wasn't used (as @tfb's excellent answer doesn't yet conclude either) but it does seem reasonable that NASA would have gotten a hold of several of the fastest lenses in the world just in case they might come in handy.

Not the answer you're looking for? Browse other questions tagged nasa identify-this-object photography camera or ask your own question.

17
Who zoomed the video camera in and out when David Scott dropped the feather and hammer on the Moon?
12
Why are there double shadows in this Apollo 14 magazine?

13
Did NASA use metric units for the Mercury missions?
15
What NASA documents did SpaceX use to design their engines?
10
Did the medium range KTM tracking cameras for the Shuttle really have a "150 inch lens"?