Mining and the transportation of resources

With the recent bootstrapping of so many space centric companies, it's starting to look like our economy will extend beyond the bounds of Earth sooner rather than later.

Assuming that mining companies such as Planetary Resources succeed and other companies force competition, how important will it be for methods of transporting materials to Earth to become cheap?

For example, would cheaper & longer paths such as Hohmann transfers be favored, or will more direct (and therefore more expensive) trajectories be preferred?

For this question we narrow the source of material to the main asteroid belt and assume that resource needs to be brought within Earths SOI.

I can think of three generalized trajectories, actually:

Locally, a need will develop for “traffic enforcement” at both the Sun-Earth and Earth-Moon Lagrangian points with lots of barge traffic passing through.

Assuming that mining companies such as Planetary Resources succeed and other companies force competition, how important will it be for methods of transporting materials to Earth to become cheap?

By way of analogy, there is a readily accessible gold deposit right here on Earth that is worth \$1 to \$100 trillion (calculated by multiplying the size of the deposit by the price per ounce). Yet nobody goes after that deposit. Why? Because that reservoir of gold is the world's oceans. The cost of extracting gold dissolved in ocean water vastly overwhelms the value of the extracted gold. The value of that vast deposit is \$0.

Extracting minerals from asteroids might be valuable in the distant future, but not for the foreseeable future. The near-term goals of companies such as DSI and Planetary Resources are much more modest. The immediate goals are to go after volatiles. Beyond low Earth orbit, a pound of water (or a pound of methane), is currently far more valuable than is a pound of gold on the surface of the Earth. Extracting water or fuel from an asteroid and using that to refuel vehicles in geosynchronous orbit or provide water to the ISS could make for a going venture.

The last thing you would want to do is to waste those hard-extracted resources to bring them back toward Earth on a fast trajectory.

For example, would cheaper & longer paths such as Hohmann transfers be favored, or will more direct (and therefore more expensive) trajectories be preferred?

Neither. Hohmann orbits are tangent transfer orbits between one circular orbit and another. Asteroid orbits can be decidedly elliptical. The transfer orbit would probably still be more or less tangent to departure and destination orbits. But it's path might be a lot different than the 180 degree path we think of as Hohmann.

To illustrate here's a pic of possible tangent transfer orbits between a circular earth orbit and an elliptical asteroid orbit: 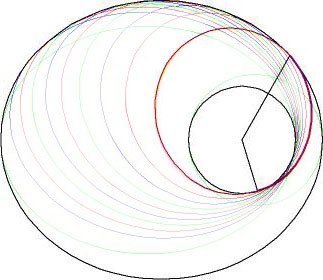 Most the possible tangent transfer orbits are pastel but I've darkened the red one. You can see the angle between departure and arrival is 100ª or 260º -- quite different from a Hohmann's 180 degrees.

The Keck Report suggests a solar electric propulsion vehicle that uses xenon propellant. Low thrust but an exhaust velocity around 30 km/s. With a high exhaust velocity, we can impart some delta V to an asteroid without a huge mass of propellent. But these low thrust burns can take a long time to accelerate an object. A slow steady burn can result in spiral trajectories rather than elliptical orbits.

For this question we narrow the source of material to the main asteroid belt and assume that resource needs to be brought within Earths SOI.

A bad assumption. To lower a main belt asteroid to a 1 A.U. perihelion would take around 4 km/s. Delta V budgets would be way too high to realize a profit.

The Keck report talks about near earth asteroids that only require about .2 km/s to be parked in lunar orbit. This is doable.

It's interesting that Chris Lewicki is one of the co-authors of the Keck report. Lewicki is the chief engineer for Planetary Resources.

how important will it be for methods of transporting materials to Earth to become cheap?

One of the things that makes spaceflight so expensive is the tyranny of the rocket equation. With all propellent at the bottom of a deep gravity well, every spacecraft has a minimum delta V budget of around 8 or 9 km/s. But with a propellent source high on the slopes of earth's gravity well, the exponent in the rocket equation would be broken. This could make space travel much cheaper.

Water rich asteroids are potential sources of propellent. Water can be broken into hydrogen and oxygen, one of the better chemical bipropellents.

And, in fact, importing water rich asteroids is one of the first things Planetary Resources hopes to do.

1
How will asteroid mining projects get the heavy material back to Earth?
2
What are the challenges for delivering bulk asteroid commodities to Earth?

59
What resources could be gained from asteroid mining that would be worth the effort?
11
Practical Lunar He-3 mining approach?
13
Could lunar mining be used to service Low Earth Orbit?
43
Legality of asteroid mining
3
Chemical resources on the moon in relation to human occupation
1
How many companies do specialize currently in (research of) asteroid mining?
6
Resources on 129 Antigone
3
Asteroid mining: will full asteroid prospecting require sending probes to each asteroid?
3
Sub Lunar Mining