Did some Apollo astronauts actually carry a sandwich and bacon in their launch suit?

Normally I consider the Apollo Experience Reports as a reliable source, but the following claim is so bizarre that I'm asking if this claim can be verified by an independent source?

After donning his suit and before departing for the launch pad, each crewman was supplied with a specially prepared frozen sandwich, a package of bacon squares, and a rehydratable beverage. These foods were overwrapped in Kel-F-82 material and placed in a pocket of the space suit for consumption when desired during the first 8 hours after launch.

If true, which suit pocket?

Related: I thought we had a question or answer about John Young's unauthorized corned beef sandwich during Gemini 3, but I couldn't find it.

How about some photographic evidence? This is Pete Conrad, during suit-up for Apollo 12, having a sandwich stashed. 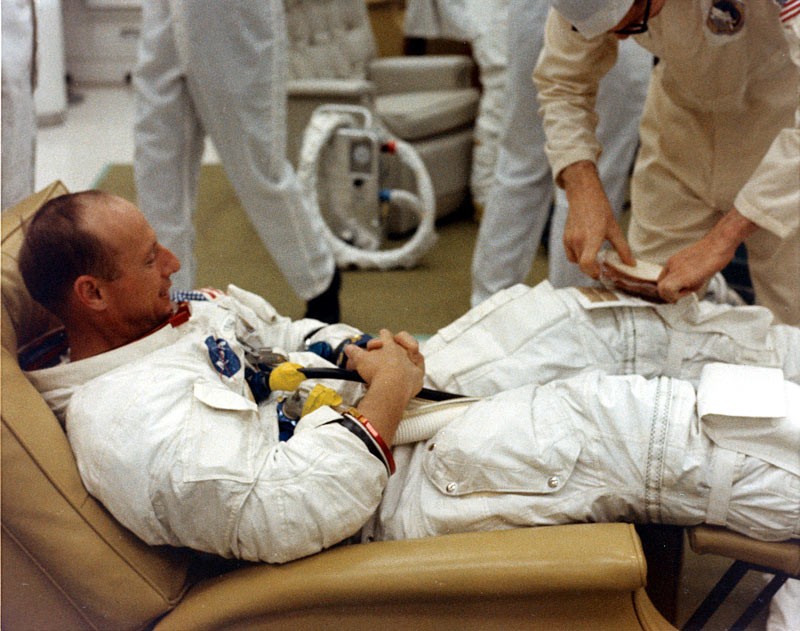 From this Popular Science article it appears the whole Apollo 12 crew got sandwiches:

After breakfast, the crew went to don their pressure suits. ... At one point, the technician assisting Conrad slipped a sandwich into his leg pocket, and the other two crew members likely got the same last minute snack pack.

AST Vintage Space covers the sandwiches in this video, and found Al Bean commenting on them in the transcript five hours into the mission:

004:59:00 Bean: I snickered at those ham sandwiches this morning, but I take it all back. They're delicious.

We suit technicians had been working in the suit room since 3:30 am, turning on the air and oxygen supply, making leak checks on the suit consoles, checking out the communications systems, laying out suit equipment, making sure suit pockets were loaded in correct order with pens, flashlights and so forth. ...

A ham on rye sandwich was carried along as a quick snack.

It's not that surprising that snacks would be tucked into suit pockets for the launch. The crew of Apollo 11 awoke at 4:15 am, had a quick medical check, then breakfast, say at around 5 am. They then suited up, took the bus to the pad, and were strapped in at about T-2 hours, 7:30 am. The launch window opened at 9:32 am and closed just before 2 pm, so in the worst case scenario they could be still strapped into their seats on the pad nine hours after breakfast (which we could refer to as "B+9 hours"), and probably getting a little hangry. As it happened Apollo 11, and almost all of the others, lifted off right at the start of the launch window at B+4.5 hours; A17 went up at around B+7 hours.

Once in orbit, the crew had to fairly promptly prepare for and execute the trans-lunar injection, execute the LM extraction maneuver, and do some star sightings and a possible course correction. They don't have a real rest break for the first 11 hours of the mission. The main food storage was below the crew couches in the lower equipment bay; grabbing a bite out of a pocket would be much easier to do during this period.

Dick told me it was for ease of snacking: launch day was so busy they needed an easily accessible little meal to tide them over until their first real mealtime. And he was sure [the sandwich in the photo] was Pete's favourite, a ham and cheese sandwich.

It looks like they managed to get to their pocket sandwiches at B+10 hours:

005:20:31 Collins: If we're late in answering you, it's because we're munching sandwiches.

6 hours after that, at B+16 hours, they appear to be thinking about a longer meal break.

For Apollo 14 specifically, it looks like they got into the snacks prior to TLI:

Note, though, that sandwich makings were included in the on-board menu, so we can't be 100% sure where the sandwiches are coming from, but I'd guess that the earlier-in-mission ones would most likely be "suit pocket sandwiches".

Not the answer you're looking for? Browse other questions tagged apollo-program food or ask your own question.

7
How many spacesuits were specifically manufactured for John Young?