Why do all recent proposed lunar landers have payloads on top?

Every recently-proposed vacuum lander I've seen has its payload as far off the ground as possible. This necessitates cranes, ladders, and elevators to get things down. (Starship may be a partial exception if it keeps those near-ground trunks.) 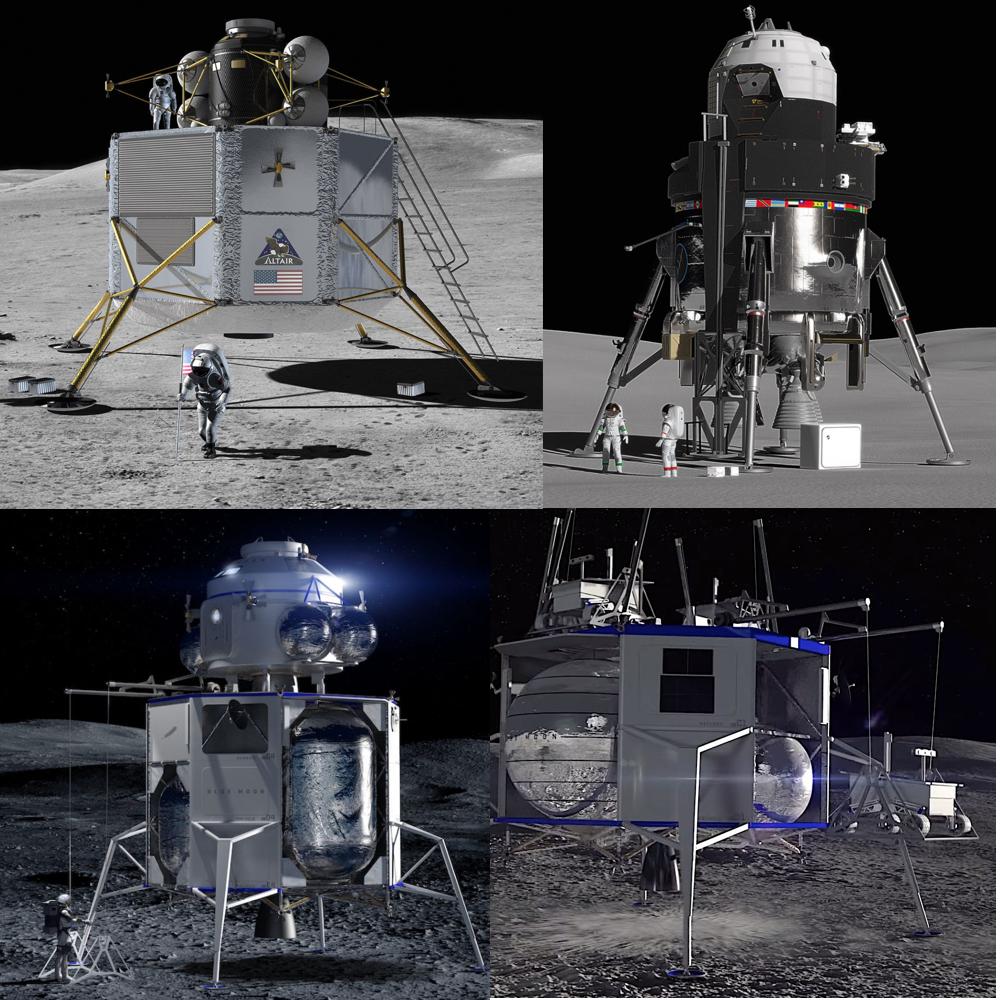 I assume it's due to the simplicity of balancing above a main rocket nozzle, and possibly due to fairing constraints. But it's clearly not ideal for delivering payloads.

For reuseable landers, have there been any other proposed configurations, for example side-mounted payloads, or underslung payloads between a two-nozzle rocket?

Hopefully the following example will make it clear what I'm suggesting: here's an underslung lander

with one engine-out abort-to-orbit ability (if you don't crash 😅).

Without having access to the proprietary design documents of these landers, it will be impossible to give a definite answer.

However, there are a few observations and guesses we can make. First of all, the landers (its only three, the last two are the same lander in different configurations)

I'd also like to mention Artemis of Draper, which has a similar structure (nozzle at the bottom, crew cabin on top with docking port).

All these landers have certain things in common, for good reason. First of all, you need a propulsion system that pushes the vehicle upwards. You have basically two options for this - side-mounted thrusters like the LES of Crew Dragon or one or two nozzles at the bottom. Side-mounted thrusters have to deal with vector losses and exhaust interfering with the vessels structure, making a nozzle (or two) at the bottom a very desirable design choice.

This makes it very, very desirable to have the docking port exactly centered on top of the vessel. Because that way, the center of mass/gravity stays aligned with the thrust vector after docking. That is what enabled the LM to act as main propulsion system on Apollo 13, saving the crew. Where the CoG not aligned with the CoT, any LM burn would have introduced an uncontrollable tumble. Also, if the nozzle and docking port are on opposite ends, you do not have to worry about exhaust interfering with the structure of the docked vessel.

Having the docking port on top makes it very desirable to have the crew cabin with the pressure vessel on top, too, since you do not want a long, pressurized tunnel running through the whole length of the ship. In case of Altair, which was a two stages lander, you need to have the crew cabin on the ascent stage anyways, and again need a propulsion system that is oriented downwards on the ascent stage as well.

Putting stuff around the nozzle isn't a good idea due to gimbaling, and you do not want to put stuff in the area that is left free for ground clearance. The engines itself should be attached directly to the main airframe in order to distribute the loads on the whole frame - putting them in flimsy trusses far away from the body isn't a good solution, because the trusses add extra weight and they can easily break. Simply putting the engines side-mounted like the SuperDracos on Crew Dragon (with all the drawbacks that brings) or as a single nozzle underneath is much more feasible.

Furthermore, you will want to avoid excessive plumbing, so where ever you put the engines, the fuel tanks ought to be close by. If you have an engine at the bottom, the fuel tanks will end up at the bottom as well. This is also a problem with the proposed design where engine hang on trusses - you have to have plumbing there, with all the associated problems (thermal management, pumps, sloshing, ullage). You neither want the fuel flow to impart torque on your vessel, nor do you want to have your fuel lines freeze or overheat. Fuel flow from top to bottom from a close-by tank is much more feasible in all those aspects.

That leaves you with the sides of the descent stage / vessel and the space between the crew cabin and fuel tanks. And that is where payloads are being put. Blue Moon needs to have a crane, anyways, since it is supposed to work autonomous. Every payload that can not leave the payload bay on its own has to be set down on the surface by a crane or robotic arm. The placement of the payload bay thus is largely dictated by balancing the weight properly, both with full and empty tanks and full and empty payload bays. And in crewed configuration, the crew vessel is put on top for the reasons listed above.

For the other two landers, we can not really see where the payloads are located. But its safe to assume they would likewise be in bays on the sides of the ship. This leaves only the question why those landers have so much ground clearance. I'd suspect the high ground clearance is due to the landers being much bigger then the Apollo LM. But if you look at SpaceX Starship, the ground clearance is even higher, making the payload bays on the bottom inaccessible from the surface without any other help like ladders, elevators or cranes as well.

This leaves the question why those landers are so high and not formed more like a pancake. And that has to do with fairing space and stability in flight. Its much harder to balance a pancake on a single rocket nozzle then it is to balance a dart-formed vessel, simply due to geometry (a high CoM means you have a long lever with the gimbaling nozzle). This is equally true for the rocket launching the vessel from Earth, limiting fairing space in diameter to slightly larger then the rockets diameter.

All in all the landers all end up in a similar way (nozzle at bottom, landing legs with high ground clearance, cylindrical shape with significant more length then radius, crew cabin on top) because they all have to fight the same constraints, and nobody has found a truly innovative design that would revolutionize this. Which isn't surprising, all airplanes have the same basic shape, as have all ships, submarines and cars.

A sky crane would potentially be another solution hat would allow payloads to be dropped right to the surface, but a skycrane has issues with reusability (it needs to make the ascend and descent twice, once for dropping and again for pickup), and thus is only a good solution for cargo drops without reusability (so that it can be crashed afterwards, like the one used for Curiosity). But it is questionable if a sky crane would provide more usable cargo space/weight then unpacking materials stored on a more traditional lander.

Without access to the proprietary design studies, it is impossible to give a quantitative analysis of the pros and cons of each approach. If anyone can provide a better sourced answer I'd gladly delete this one.

@polygnome covers a lot of the design motivations, I imagine they cover the big picture but an addition from my little corner of the academia:

One area of concern (source: NASA provided funding, though from what I can tell NASA are worried about, and provide funding for everything), is the spray of particulate matter and dust, picked up by the jet form the engine, impacting the underside. This ejecta is going fast and armouring against it adds weight. One central engine and keeping the body of the craft higher on legs means that the ejected material can be going more vertical before it hits anything important.

This is one of the many reasons mars landings are particularly hard, due to the finer dust particles and complex reasons, the ejection angles are higher. Hence the need for sky cranes.

The Dynetics Human Landing System proposal has its fuel tanks and engines at either side of the cabin.

The reason is mostly to isolate the habitable portion of the lander to the end that docks with the Lunar Gateway. On two-stage designs, this is just the Ascent Module. Habitable volume is heavy compared to structure and fuel tanks. Another benefit is being able to dedicate most of the bottom of the lander to fuel tanks to reduce plumbing.

Ladders and elevators are not much of a problem on the Moon due to its low gravity.

2
What solution does SpaceX plan so to make it possible for the crew to get out from Starship on other planets, considering the cabin's elevation?

12
Do lunar landers communicate with ground stations during descent and landing?
12
Why was the Shuttle's LOX tank on top of the LH2 tank, since that makes it more top-heavy?
7
Why aren't landers designed to point their solar panels and radio antennas to Sun and Earth?
23
Why did the Apollo Lunar Module have four landing legs?
14
Why didn't the space shuttle SRBs have wings and tires?
6
Surveyor TD-339 engines - used on all US powered robotic landers?
3
Why a donut-shaped balloon decelerator in the Aldrin-Purdue proposed Mars lander descent?
12
What colors were used in the Apollo Lunar Module interior, and why?
2
Why are the rovers finding the long Lunar night difficult to overcome?
5
Why do countries or companies still bother sending landers/probes to the moon?