Was this Gemini "giant eye chart" ever performed?

This article from the May 14, 1965 issue of the Manned Spacecraft Center Roundup describes an "eye chart" experiment on an upcoming Gemini flight. Did this experiment end up happening in any manner? 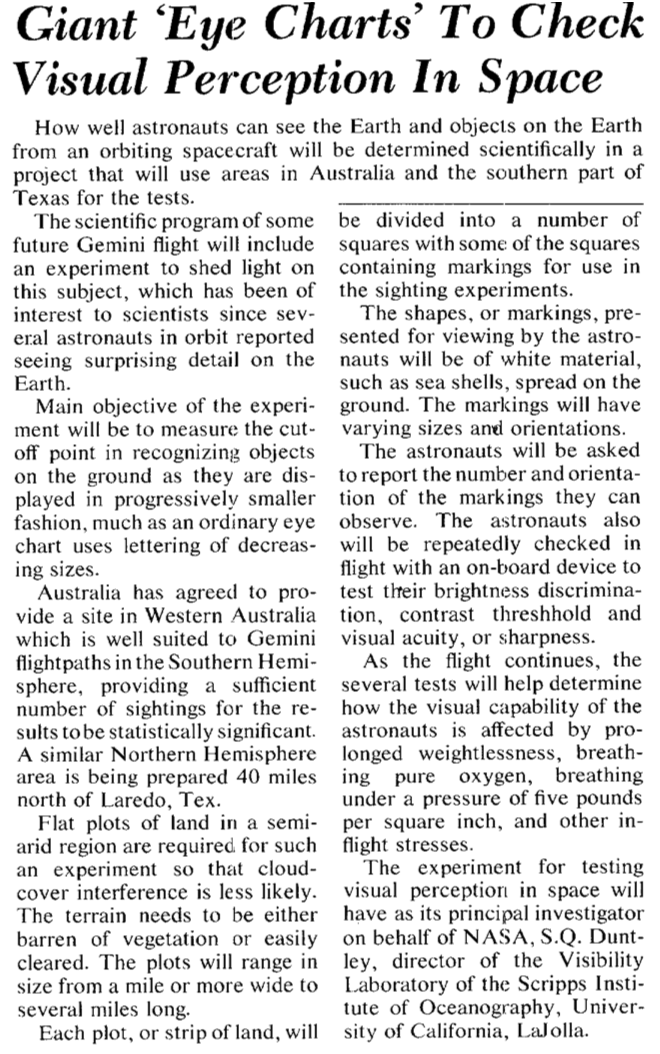 How well astronauts can see the Earth and objects on the Earth from an orbiting spacecraft will be determined scientifically in a project that will use areas in Australia and the southern part of Texas for the tests.

The scientific program of some future Gemini flight will include an experiment to shed light on this subject, which has been of interest to scientists since several astronauts in orbit reported seeing surprising detail on the Earth.

Main objective of the experiment will be to measure the cut-off point in recognizing objects on the ground as they are displayed in a progressively smaller fashion, much as an ordinary eye chart uses lettering of decreasing sizes.

Australia has agreed to provide a site in Western Australia which is well suited to Gemini flightpaths in the Southern Hemisphere, providing a sufficient number of sightings for the results to be statistically significant. A similar Northern Hemisphere area is being prepared 40 miles north of Laredo, Texas.

Flat plots of land in a semi-arid region are required for such an experiment so that cloud-cover interference is less likely. The terrain needs to be either barren of vegetation or easily cleared. The plots will range in size from a mile or more wide to several miles long.

Each plot, or strip of land, will be divided into a number of squares with some of the squares containing markings for use in the sighting experiments.

The shapes, or markings, presented for viewing by the astronauts will be of white material, such as sea shells, spread on the ground. The markings will have varying sizes and orientations.

The astronauts will be asked to report the number and orientation of the markings they can observe. The astronauts also will be repeatedly checked in flight with an on-board device to test their brightness discrimination, contrast threshold and visual acuity, or sharpness.

As the flight continues, the several tests will help determine how the visual capability of the astronauts is affected by prolonged weightlessness, breathing pure oxygen, breathing under a pressure of five pounds per square inch, and other in-flight stresses.

The experiment for testing visual perception in space will have as its principal investigator on behalf of NASA, S.Q Duntley, director of the Visibility Laboratory of the Scripps Institute of Oceanography, University of California, LaJolla.

Yes, it was performed during Gemini 5 and 7. Here's the report.

... Ground observation sites were provided on the Gates Ranch, 40 miles north of Laredo, Texas, and on the Woodleigh Ranch, 90 miles south of Carnarvon, Australia. At the Texas site, 12 squares of plowed, graded and raked soil 2000 by 2000 feet were arranged in a matrix of 4 squares deep and 3 squares wide. White rectangles of Styrofoam-coated wallboard were laid out in each square. Their length decreased in a uniform logarithmic progression from 610 feet in the northwest corner to 152 feet in the southwest corner of the array. Each of the 12 rectangles was oriented in one of four positions (north-south, east-west, or one of two diagonal positions), and the orientations were random within the series of 12. Advance knowledge of the rectangle orientations was withheld from the flight crew, since their task was to report the orientations. The rectangle orientations were changed between passes and their sizes were adjusted in accordance with the anticipated slant range, solar elevation and visual performance of the astronauts on preceding passes. The Australian observation site was similar to the Texas site.

...the visual performance of the astronauts during space flight was within the statistical range of their preflight visual performance and demonstrated that laboratory visual data can be combined with environmental optical data to predict the limiting visual capability of astronauts to discriminate small objects on the surface of the Earth in daylight. 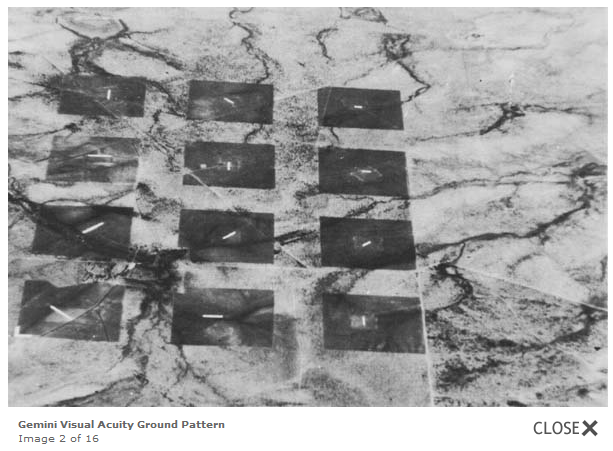 Not the answer you're looking for? Browse other questions tagged medical project-gemini naked-eye ocular or ask your own question.

40
Why do they have a Snellen eye chart on the ISS?
10
Why was Gemini VIII terminated after recovering from the OAMS thruster failure?
6
Was there any risk of the Gemini hatches blowing open?
49
Why is there a Saturn V in the background of this Gemini-Titan launch?
6
How practical was the suggestion to cut the lanyards on the Gemini 9A mission?