Can a spacecraft use an accelerometer to determine its orientation?

I know that almost every spacecraft uses a gyroscope to determine its orientation, but I don't know if an accelerometer could also be used in addition to a magnetometer to calculate it.

I have been trying to figure it out searching on the internet but all articles say that it can only be done if the accelerometer only reads gravity, in other words, if it is not moving at all. They use a gravity vector as a reference and then calculate the needed rotation to transform body coordinates into fixed ones. Does it mean that this configuration can't be used to determine the orientation of a rocket in motion and have to rely on the gyroscope measurements?

If multiple accelerometers are spread around the vehicle, their readings can be combined to determine angular speed (from centripetal acceleration) and angular acceleration somewhat easily. There would probably need to be at least 4 or 5 to cover all the degrees of freedom, with one at the CG to cancel out linear acceleration.

To calculate orientation from this, the angular speed would need to be integrated over time. With this integration, the same inaccuracy problems come up as with accelerometer position determination. The position drifts from the true value over time. A gyroscope is more effective in this role.

Magnetometers are useful in space, but need to be used differently than on Earth. Normally on Earth they can be taken as a compass, an inertial frame direction that doesn’t have gyroscope drift, but in orbit, it’s a more complex problem.

It depends a bit on what technology you’re referring to.

The original inertial navigation systems used rotating gyroscopes. Those were and are expensive.

Modern MEMS inertial navigation systems (example) don’t use rotating gyroscopes. Instead, they get both linear and angular acceleration (and angular rate) information from their MEMS accelerometer assemblies. That’s not perfect, degree/hour rates are typical, so other systems (including horizon and sun trackers and magnetometers) are used to make long term corrections.

The MEMS systems are based on tiny vibrating elements. Translational and angular motion affect the vibration in various ways, which are sensed and read out electronically. This is an early example from Draper Labs which worked like a large array of tuning forks: 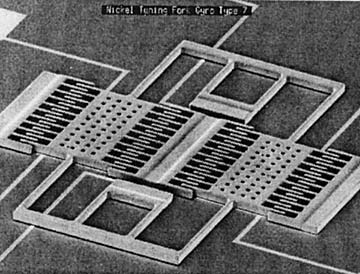 A linear motion affects all the forks the same, while a rotation affects them differently, and the readout and processing electronics used that to make measurements.

Not the answer you're looking for? Browse other questions tagged attitude measurement flight-control or ask your own question.

3
How could Earth's magnetic field be used to determine a cubesat's attitude in LEO?

19
Do any spacecraft use GNSS for attitude determination?
7
Can a free falling astronaut change his spin and orientation?
3
How does a spacecraft know its orientation in orbit?
4
Does the Hubble telescope use a "simple" PID-controller for its pointing control system?
5
How does Voyager 1 keep track of its orientation?
4
Using what technology one can keep a spacecraft truly non rotating
11
What sensors or combination of sensors do rockets use during takeoff for their orientation?
1
How accurately can you determine time from planetary/star positions?