For very low Earth orbit satellites such as the SpaceX Starlink, would it be at all feasible to design an ionic thruster that carries no onboard fuel?

Instead it would simply scoop the atoms directly from the thin atmosphere in front of the satellite with a funnel shaped inlet, concentrate the atoms into a chamber, and then ionize and expel them from the back.

Such a thruster would apparently be able to run forever as long as electric power is available.

ESA is working on such an engine.

an ESA-led team has built and fired an electric thruster to ingest scarce air molecules from the top of the atmosphere for propellant, opening the way to satellites flying in very low orbits for years on end

The molecules collected by the intake designed by QuinteScience in Poland are given electric charges so that they can be accelerated and ejected to provide thrust.

“At first we checked our thruster could be ignited repeatedly with xenon gathered from the particle beam generator.”

As a next step, Louis explains, the xenon was partially replaced by a nitrogen–oxygen air mixture: “When the xenon-based blue colour of the engine plume changed to purple, we knew we’d succeeded.

“The system was finally ignited repeatedly solely with atmospheric propellant to prove the concept’s feasibility. 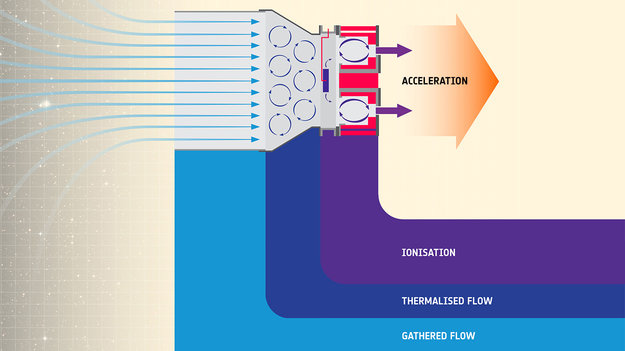 A 2017 paper describes the test campaign:

During the final stage of the experimental campaign, the system was successfully ignited with the atmospheric propellant provided by the particle flow generator (operating at 4.7 mg/s mass flow rate of pure N2-O2) and gathered by the RAM-EP intake. In this condition, a thrust of 6±1 mN and a drag of 26±1 mN were measured.

This was at a simulated altitude of 200 km.

Concerning the RAM-HET, it was only partially compliant with its expected characteristics. More in details, the first stage showed a good capability to ionize the flow provided by the PFG. Since the effective ionization of the atmospheric propellant represents the main RAM-EP concept challenge, this result shows that Double Stage Hall Effect Thrusters can be considered as a promising technology for air-breathing applications. However, the second stage showed performance below expectations and further developments are required to improve ion acceleration.

Indeed, the current circulating in the acceleration stage was always significantly higher than expected. This phenomenon posed a limit to the applicable acceleration voltage and, in turn, to the achievable thrust. In conclusion, a redesign of the RAM-HET second stage shall lead to considerably increased performance. In this perspective, an optimized RAM-HET of similar dimension would be considered for further developments of the RAM-EP technology, together with an optimized intake having a collecting area of 1 𝑛 2 . Considering that the main flow properties slightly differ among ground and flight conditions, that a 1 m2 inlet area intake would lead to a higher mass flowrate accepted into the system with respect to the tested intake, and that the thruster design still has a considerable scope for improvement, a RAM-EP system capable of providing a positive net thrust in flight condition seems achievable.

Not the answer you're looking for? Browse other questions tagged propulsion ion-thruster refueling or ask your own question.

10
Thrust and rotation strategy to circularize a standard GTO orbit using ion propulsion?
5
Thrust vectoring for ion propulsion - any plans or current research?
8
What limits thrust-to-weight ratio of ion thusters? (beside power density of energy source)
7
Ion Thruster Thrust Calculation Problem
8
How to measure thrust of experimental ion engine
2
In theory, how much thrust could an ion thruster generate?
5
Why is the thrust to weight ratio of ion thrusters so low?