Saturn I's four outer engines' gas generator exhaust, why not vent to the side like the four inner engines?

At about 04:58 in Scott Manley's new video NASA Might Be Giving Away A Saturn I Rocket - Here's Why I Love This Vintage Booster he says:

So the four engines in the middle of this thrust plate (plane?) on the bottom are fixed; they just hold position. The four on the outside they gimbal, and they provide all the roll, yaw, and the pitch control.

There’s another, there’s an interesting difference in these engines as well. The four engines in the middle, they exhaust their gas generator exhaust over the side; there’s these little flares coming out the side.

But the outside ones, they use a gas generator exhaust around the tip of the nozzle, so it looks like a film cooling… dark, and then you’ve got the light coming through here.

I think that’s great, and I never quite figured out why this decision was taken, and I suspect it’s got something to do with the engines gimbaling. They didn’t want the super-hot exhaust to impinge on anything.

Question: I don't understand what the challenge would be to point the gas generator exhaust from the four outer engines outward and away from the rocket so that even when they gimbaled it wouldn't hit something. Why would this have been so difficult? How could this be a proposed explanation for this 4 vs 4 configuration?

I've added some screen shots and a few arrow annotations of things referenced in the block quotes. 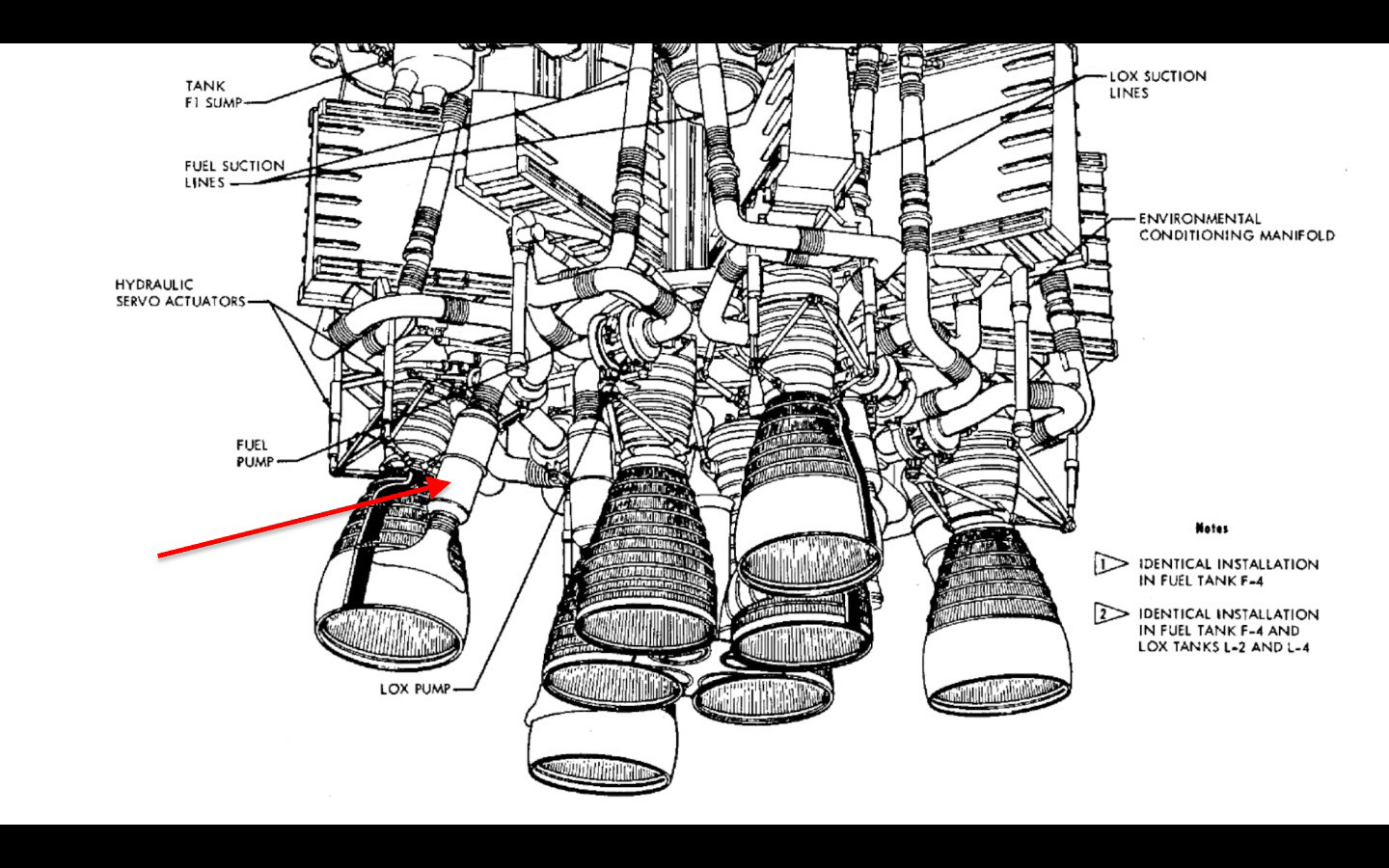 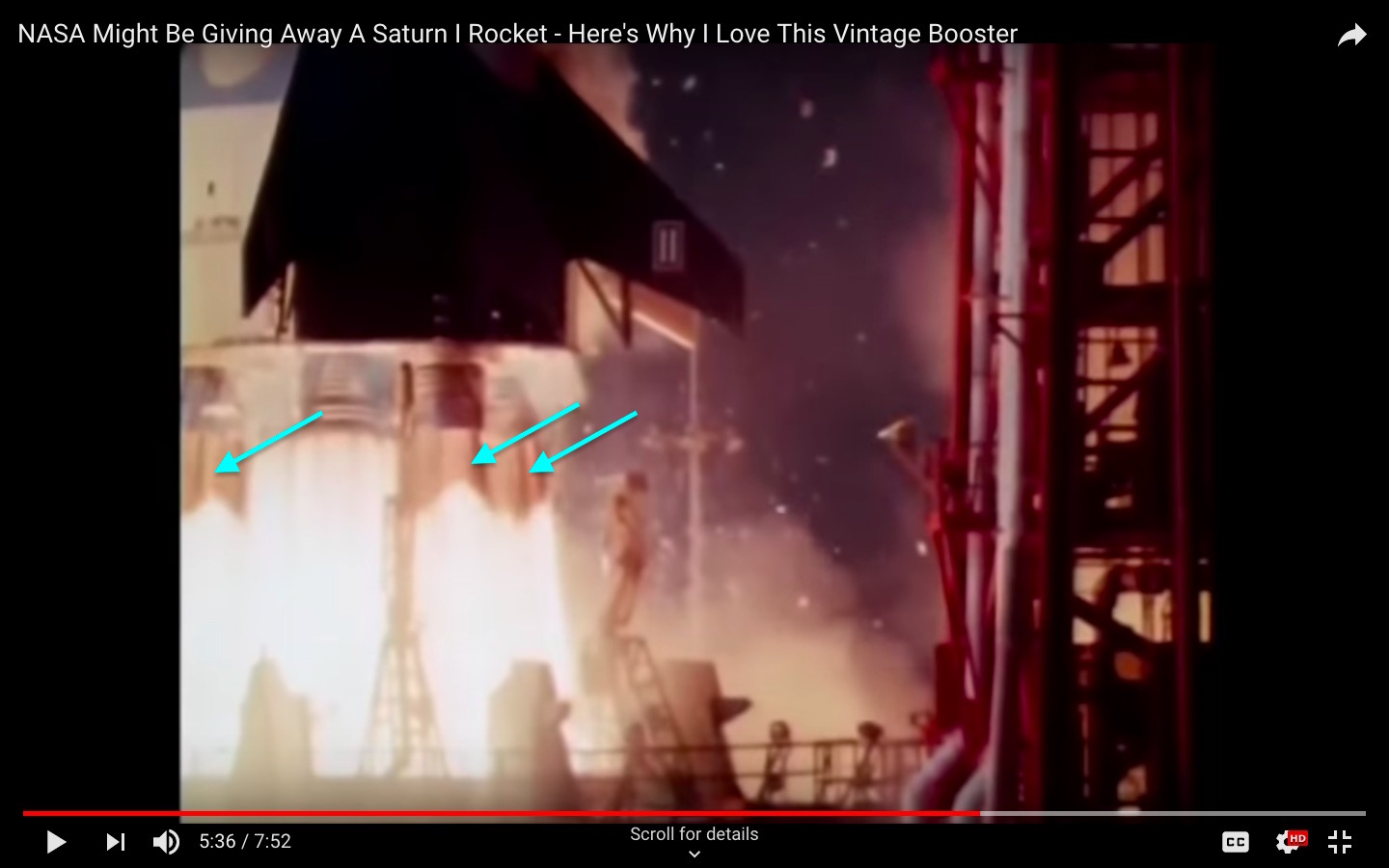 The H-1C engine, the fixed inboard unit, had a curved exhaust duct to carry the turbine exhaust gases, and the H-1D engine, the gimbaled outboard unit, mounted a unit known as an aspirator. The inboard engines simply ducted the turbine exhaust overboard. The outboard engine exhaust was ducted into collectors, or aspirators, located at the exit plane of the nozzle. For the H-1D aspirator, designers chose a welded Hastelloy C shell assembly, mounted on the outside of the thrust chamber and extending beyond the thrust chamber exit plane. The aspirator prevented the fuel-rich exhaust gases of the gas generator from recirculating into the missile boat tail during flight. Instead, the gases merged into the engine exhaust plume.

This image shows the fixed ducting used to exhaust the inner engine GG exhaust overboard from the engines not fitted with aspirators. 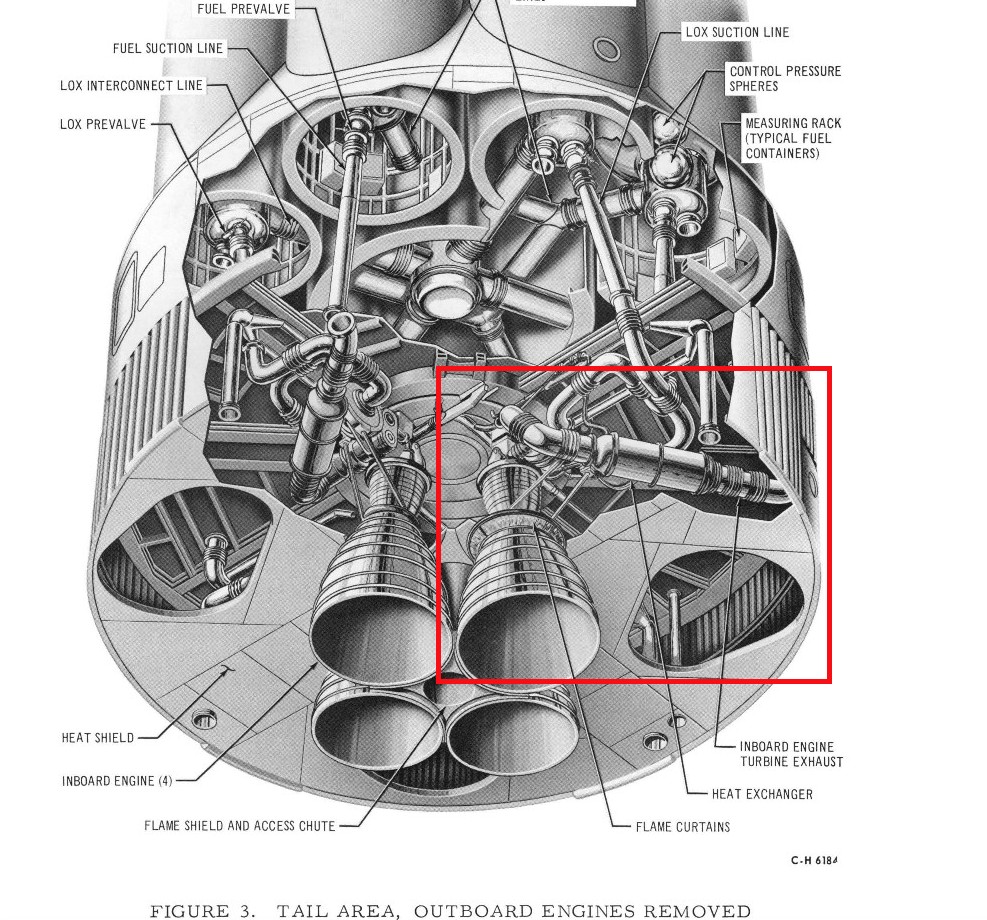 This schematic shows the aspirator. 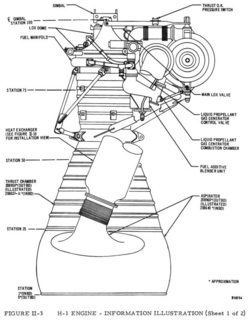 You don't want an exhaust pointing sideways on a gimbaled engine, because that exhaust will exert considerable force on the gimbaling mechanism, making it much easier to move the engine in one direction than the other.

You also don't want the exhaust pointing sideways when you can point it downwards and take advantage of its thrust. So the more interesting question would be, what drove the decision to have the four inner turbopump exhausts pointed outwards?

Not the answer you're looking for? Browse other questions tagged history engine-design design saturn-i or ask your own question.

8
Did von Braun have "a thing" for fins? Why did Saturn I block 2 get fins because it's a "von Braun" rocket?
16
What is an "exhausterator" and what does it do?

5
Is it possible to keep fuel and oxidizer tanks pressurized during flight by heating up their contents using exhaust gases?
14
What solid fuel was used in the Katyushas rocket artillery of WW2?
3
Do gimbaled engines have to be carefully test-fired to ensure the thrust axis intercepts center of rotation?
8
Did von Braun have "a thing" for fins? Why did Saturn I block 2 get fins because it's a "von Braun" rocket?
16
Why aren't expander cycle engines used on lower stages?
5
Why were later Russian engines inferior to the NK-33?
5
Why don’t any engines use turboelectric oxidiser pumps?
2
Fan powered turbo-pump for low altitude/missile engines
4
How to read this Cassini Main Engine Operating Box (oxidizer vs fuel tank pressures)?