Why doesn't the Falcon-9 first stage use three legs to land? 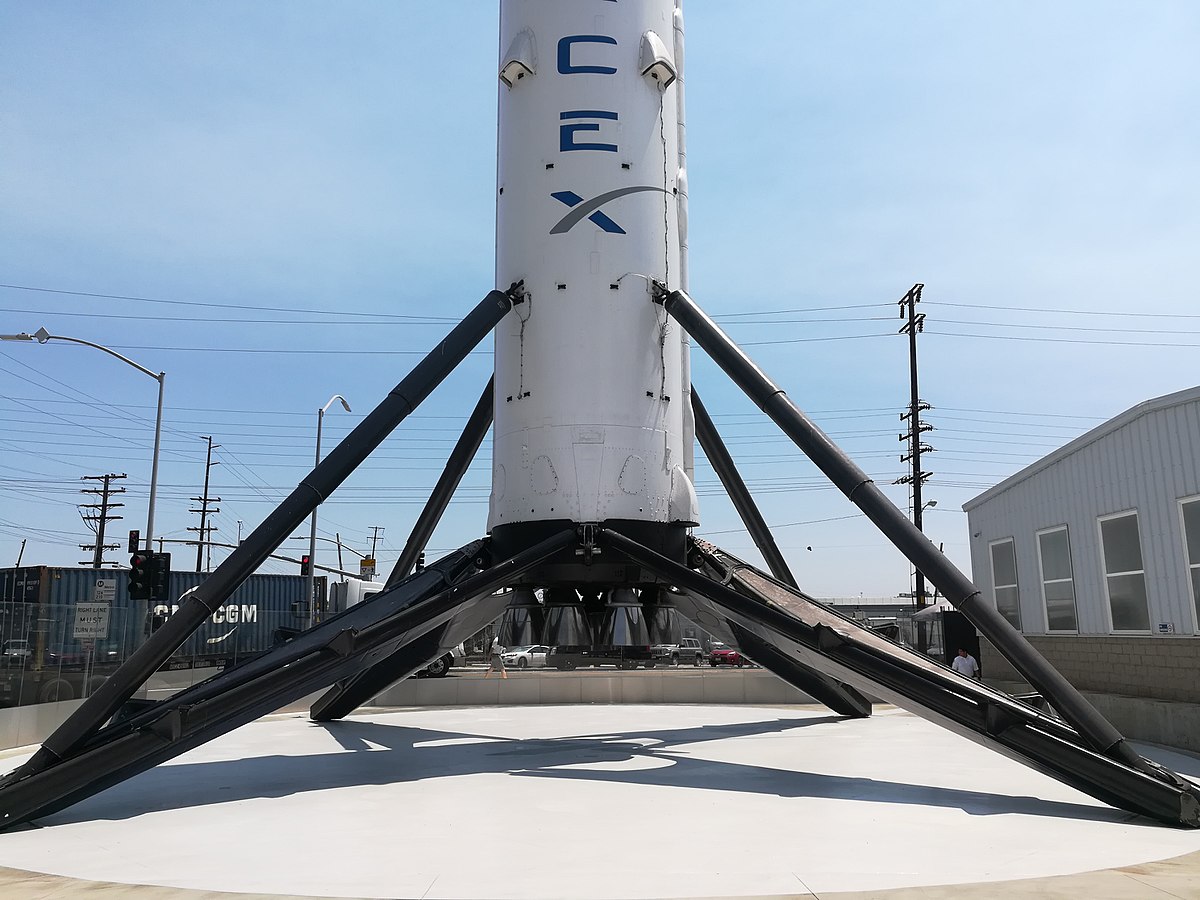 The immediate thought that would probably come into your mind would be "Because 4 legs is more stable than 3." However that is not always true. 3 legs offer the same or in some cases more stability as 4 legs as 3 legs guarantee they are in the same plane. This Stack Exchange answer to the question Why did the Apollo Lunar Module have four landing legs? states that,

However the boosters always land on a flat smooth surface and even if the booster did land with a lot of lateral velocity, it would be damaged or fall into the ocean. Also with three legs, the booster would be even lighter and cheaper.

Question: So why did SpaceX choose to use 4 legs on a Falcon 9 booster? Was it simply because it offers more stability in some cases (such as landing sideways) and has less margin for error, or does it simply distribute more weight, or is it another, less obvious reason?

I can't speak for why SpaceX made the decision. However, while three legs won't wobble, four legs are less likely to tip over. SpaceX has demonstrated tipping over is a major problem.

There are different kinds of stability! A three-legged stool is guaranteed not to wobble because the ends of its legs always form a plane. But a little wobble is only an inconvenience. More important for practical purposes, [a three-legged] stool is LESS stable than one with more legs in the sense that its center of gravity is further inside its base: the more sides a regular polygon has, the greater its apothem (the distance from the center to the middle of an edge). That greater distance means the sitter can lean farther out in any direction without tipping over. So if you don't mind a slight tipping but don't want to fall on your face, or if you have a reasonably even floor, more legs are better. 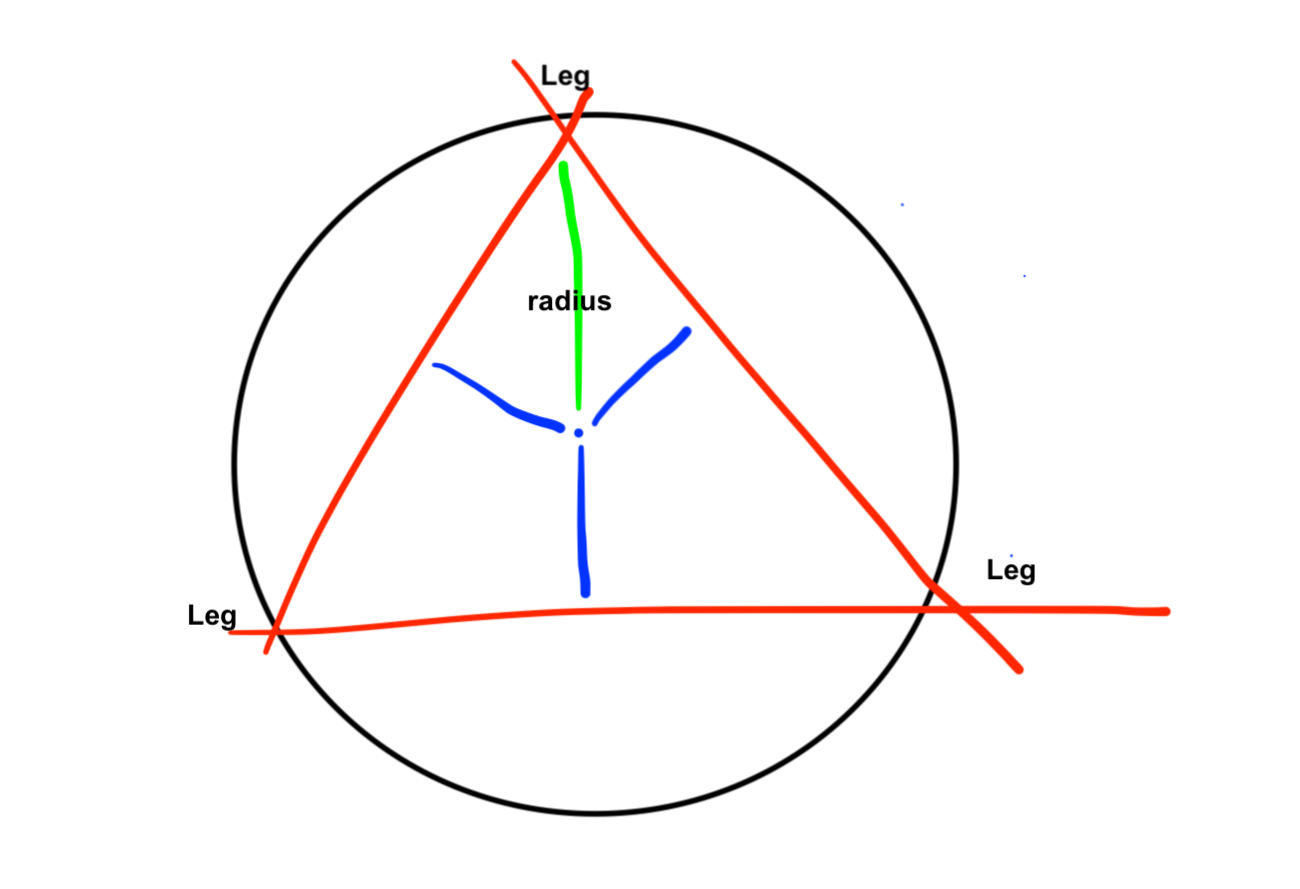 Let's all pretend that's an equilateral triangle. The blue lines are the apothems. The green line is the radius. They form a triangle with an inner angle of 120/2 or 60 degrees. We can solve for the apothem using the law of sines. 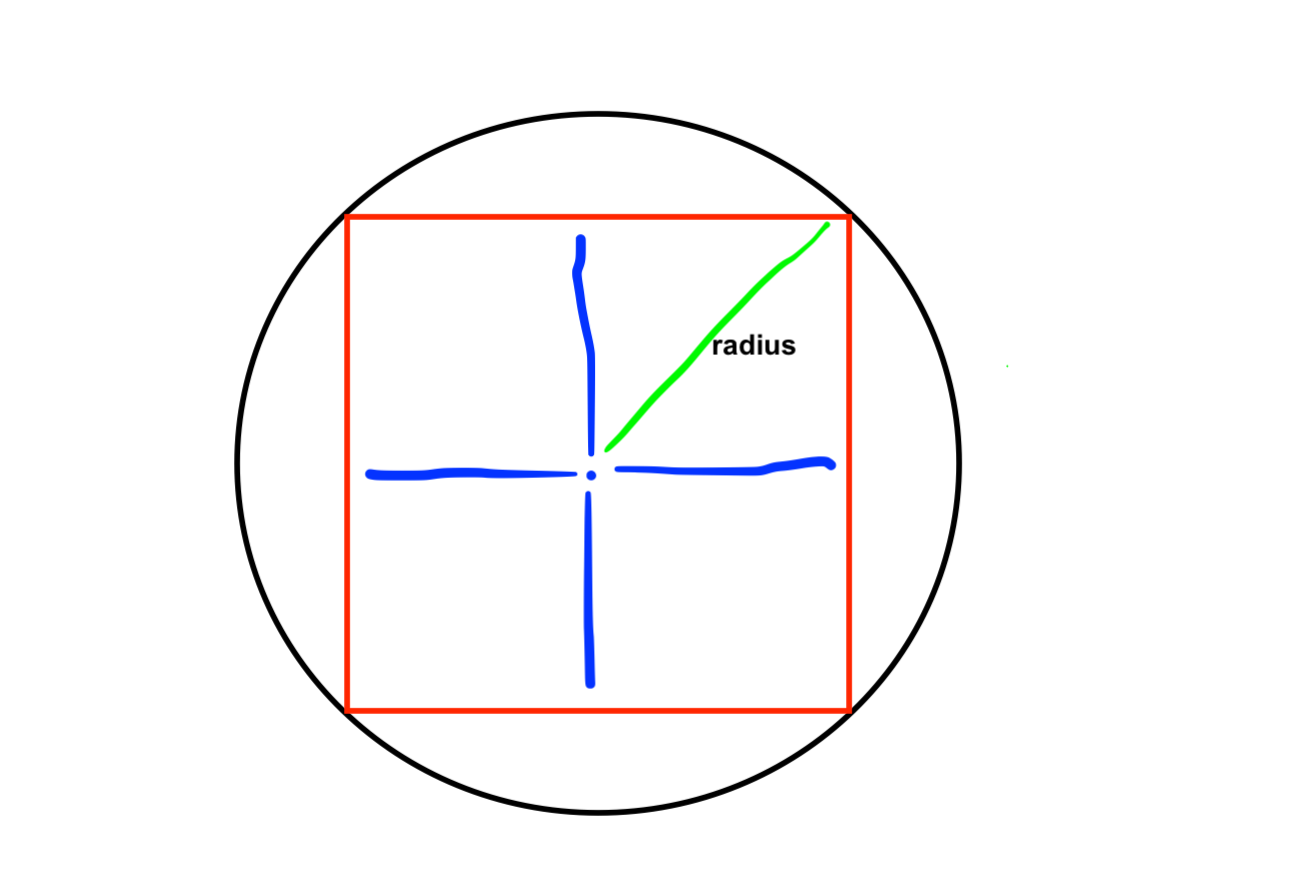 Same idea, but now the angle is 45 degrees.

But what if we just used three longer legs? Would that be less weight than four shorter ones? In other words, we need to get the three-legged rocket's apothem to 0.707. How much further spread out do the landing pads have to be? Set a' to 0.707 and solve for r`.

All three landing pads must be over 40% more spread out than four. For three legs, that's 120% further, and that's before we consider that the legs are at an angle and so need to be considerably longer to have the pads go 40% further out from the rocket's center. Being longer, they would need to be stronger and even heavier.

Four legs only need to be 15% broader to match the stability of five, or 60% total, making it more economical to use four longer, stronger legs than five shorter ones.

The landing legs on any landing space vehicle inevitably violate at least one of those three conditions (rigidity, fixed length, fixed orientation) that are needed to make a three legged stool superior.When a Falcon first stage does land, all of the legs will be on the surface due to these features. While three legs buys very little with respect to stability, a three legged lander loses a whole lot with respect to tippability.

Another factor is that the Falcon has nine engines, one in the center and the other eight around it in an octagonal or square-like arrangement. The bottom part of the thruster reflects this tetradic / octagonal symmetry. The bottom attachment points are close to the engines and have to fit within the constraints of the engine layout. Having four landing legs obeys this symmetry; having only three would not.

I imagine designing three legs around the two side cores of a Falcon Heavy would also be quite a bit more difficult, since (assuming equal spacing) two of the legs would be quite a bit closer to the cores.

No one has mentioned crush core in the legs, so I will jump in. Falcon 9 legs use a consumable and easily replaceable aluminum honeycomb crush core material in each leg. In the event of an off-center landing, it is more likely that at least 2 legs will share the impact in a 4 leg design. Same for a hard landing, with all legs sharing the impact. If all of the crush core in one leg is used on landing, then it is safe to assume that structural damage to the body will occur, and the vehicle will tip, explode or otherwise be lost. So the added weight of the 4th leg reduces the probability of a booster loss.

6
How does SpaceX handle rearranging flight order?
23
Why did the Apollo Lunar Module have four landing legs?
19
SpaceX first stage landing: Why not use an elevated net above the landing platform to catch the rocket?
3
What's the purpose of the white flashing lights on the Falcon 9 legs?
16
Is the Falcon Heavy booster much simpler to land than the Falcon 9 first stage?
8
Recent Falcon 9 flights - 'topped off' with propellants, or just a margin over what's needed to land?
4
Can Falcon 9 first stage landing final burn using one, two, and three engines? Tradeoffs?
4
Why did they not use the Flight Termination system on CRS16 booster?
6
Could Falcon 9 take off without launchpad
19
Why doesn't Starship have four landing legs?