Why is my Earth simulation slower than the reality?

It took me a long time to create a simulation of the Earth like that. I wanted to show the real spinning speed of the Earth. Here's my video:

From this NASA live stream, I can visually notice that the Earth spins a little bit faster than my simulation:

In your simulation, the camera (or the viewers perspective) is stationary in what seems like in an altitude of a geostationary orbit. However the ISS is not stationary, it is travelling 7.6 km/s. It completes one orbit in 92 minutes. The ISS orbiting is giving the illusion that the Earth is spinning that fast.

Note: The Earth does still spin while the ISS is orbiting (obviously) but it doesn't spin as fast as you think it does in the second video.

So in summary, in the video below your simulation, that is not the Earth spinning, it's the ISS orbiting the Earth. Your simulation is correct and you could add clouds to make it look even better :)

Edit: People in the comments are discussing where the virtual camera is placed, so I thought that I can clear this up and give additional information to the OP. 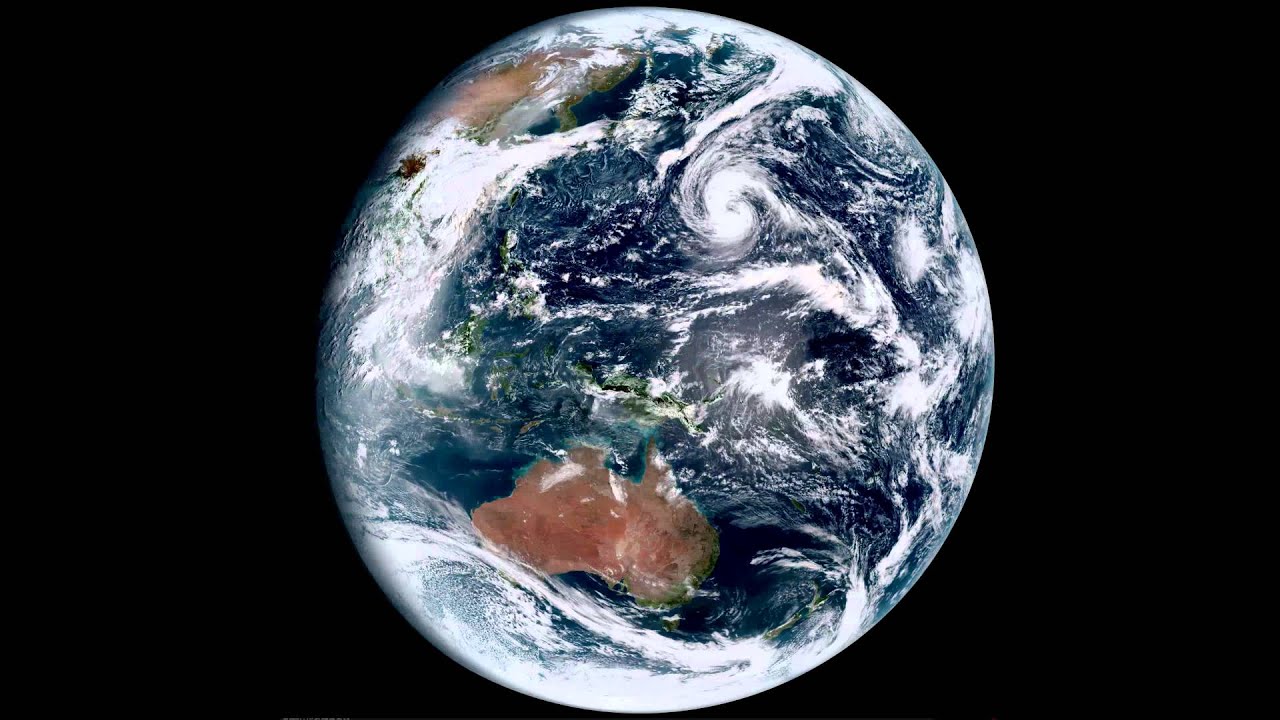 In both images, the Earth fills the height of their respective ports and their field of view (FOV) are similar.The Himawari Satellite is in an altitude of 35,790 km meaning the virtual camera in OP's simulation is also around that height (this is apporximation of course, it's entirely possible the image can be zoomed in or out, which results in a smaller and bigger FOV respectively). The simulation's camera is definitely not in orbit as you would see the same point of the Earth at all times.

However, if we are talking about real physics, a camera can't stay in that altitude forever, it will eventually fall back down to Earth. Therefore, it's most likely in a L1 Lagrange point between the Sun and the Earth. This is a famous example of a time lapse of Earth spinning taken with over 3000 images by the Deep Space Climate Observatory satellite, which is in a L1 Lagrange point. However the Earth-Sun L1 point is 1.5 million km away from the Earth, so the Earth in OP's simulation should have a smaller angular size but it is possible that the camera is zoomed in. Also the Sun looks like it is centered on the Earth further proving it's most likely in a L1 Lagrange point.

As others have noted, the ISS orbits the earth extraordinarily quickly, and that explains the discrepancy. However, there may still be a small error in your simulation.

Whether or not there is an error depends on where you intend the "camera" to be. My suspicion is that your simulation was created as follows:

But that's not a realistic simulation of the earth, for the somewhat obvious reason that the Earth is in orbit around the Sun.

People who have not studied astronomy or horology are often surprised to learn these two facts:

Surely that's what you were taught, but that is completely wrong. (In fact, my grade 12 physics teacher of all people had a bunch of completely wrong beliefs about the length of the day and would not believe me when I tried to explain it to him. If science teachers cannot be bothered to get it right, it is no wonder that students don't get it right either.)

To take the second point first: the Earth spins on its axis in 23 hours, 56 minutes and 4.1 seconds. The amount that nearby stars move relative to each other in a day is incredibly small, so let's pretend that it is zero, and that your camera is fixed in place with respect to those stars. From that perspective, in the course of a day you would see two things:

It is the combination of those two movements that makes it appear to us -- prisoners of gravity, stuck to the surface of the Earth -- that the day is on average 24 hours long. (Notice that one sidereal day is 1/365.25th shorter than a mean solar day; that's not a coincidence!)

Plainly your camera cannot be fixed relative to the "fixed stars" because the Earth is getting neither bigger nor smaller.

Suppose instead you simulated the Earth going around the Sun, and you placed your camera on the line between the Earth and the Sun, pointing at the Earth. Now would we observe the rotation to be exactly once every 24 hours, assuming we sped the Earth up to rotate once a sidereal day?

No, we still would not observe the day to be exactly 24 hours noon to noon, because we've forgotten something else. The Earth orbits in an ellipse, not a circle, with the Sun at the focus, and orbits are faster when they are closer to the Sun. That means that some times of the year we have noon-to-noon times that are slightly longer than 24 hours, and sometimes slightly shorter, and they average out to 24 hours over a year. This is called the mean solar day, and the relationship between the mean solar day and the time it actually takes to go from noon to noon is determined by the equation of time. Our 24 hour clocks are running ahead of the Sun in the northern hemisphere's winter and summer, and behind in spring and autumn.

Now suppose you simulated that; would your simulation now be accurate? It depends on the level of precision you need to reach. For example, the Earth's orbit is affected by the position of the Moon. The Earth's orbital path does not pass through the center of the Earth; it passes through the barycenter of the Earth-Moon combination. Also, the tides caused by the Moon are causing the Earth's rotation to slow down. And there are wobbles in the Earth's motion caused by various factors, and these all affect the length of the day.

So it all comes down to how accurate you want your simulation to be. If you just want to give a sense of how fast the Earth rotates, your simulation is fine; it is certainly has less than a 1% error. If you want to accurately simulate the relationship between the Earth and the Sun, you'll need to take more factors into account.

The ISS takes approximately 90 minutes to circle the Earth. This presumably results in the higher apparent speed of rotation.

Scanning along bar in your video the earth appears to rotate about 180 degrees in 12h. Seems about right to me! As pointed out, the ISS is not in any way stationary (despite the name), and should not be expected to represent earth's rotation in any particularly meaningful reference frame.

Not the answer you're looking for? Browse other questions tagged earth simulation movement or ask your own question.

10
Is it possible that the earth is in a nebula?
1
Can planet Earthtoo put a Tooian in orbit too?
7
Who does these mesmerizing simulations of the phases of the Moon? And how?
8
Why is the earth so small when observed from the moon?
13
What orbital mechanics toolkits available today are suitable for a real-time simulator?
11
Why is FORTRAN recommended for astrodynamics rather than MATLAB?
1
What is Direct Simulation Monte Carlo and why is it a good method for simulating spacecraft drag in VLEO?