Why the logarithmic spiral for the ASM-135 ASAT's infrared detector?

The Scott Manley video The Only Pilot to Shoot Down A Spacecraft - A Space Ace talks about the ASM-135 ASAT and its successful test launched from an F-15.

He shows images from the page The F-15 ASAT story, by Gregory Karambelas, edited by Sven Grahn. As mentioned in the video, the spacecraft rotated at about 35 RPM.

The target sensor operated at liquid helium temperature (about 4.2 Kelvin or a little above) and according to the linked page was a cross of four logarithmic spiral patterns as shown below. I'm guessing that "NB" is really Nb or niobium, a superconductor at this temperature and would be very sensitive to tiny amounts of heat from infrared radiation imaged to a spot by the folded Gregorian telescope described.

In space, after the missile was launched, these cryo lines were retracted, and then two spin motors located on the spin bearing assembly of the interceptor were fired and the interceptor was spun up. It is important to note that the interceptor did not work while not spinning. This was not a staring array. I have attached a crude drawing of the strip detector layout. Those spiral lines were symmetrical logarithmic spirals (spirals of archimedes as I recall). Some simple geometry and trigonometry would enable us by recording the time of the detector crossing, calculate the objects location in the sensor field of view.

Question: I can understand how the relative timing between the four pulses as the spot passed over the four arms of the cross could be used to calculate the direction to the target, but I don't see why a cross of four straight line segments wasn't used. Why the logarithmic spiral? 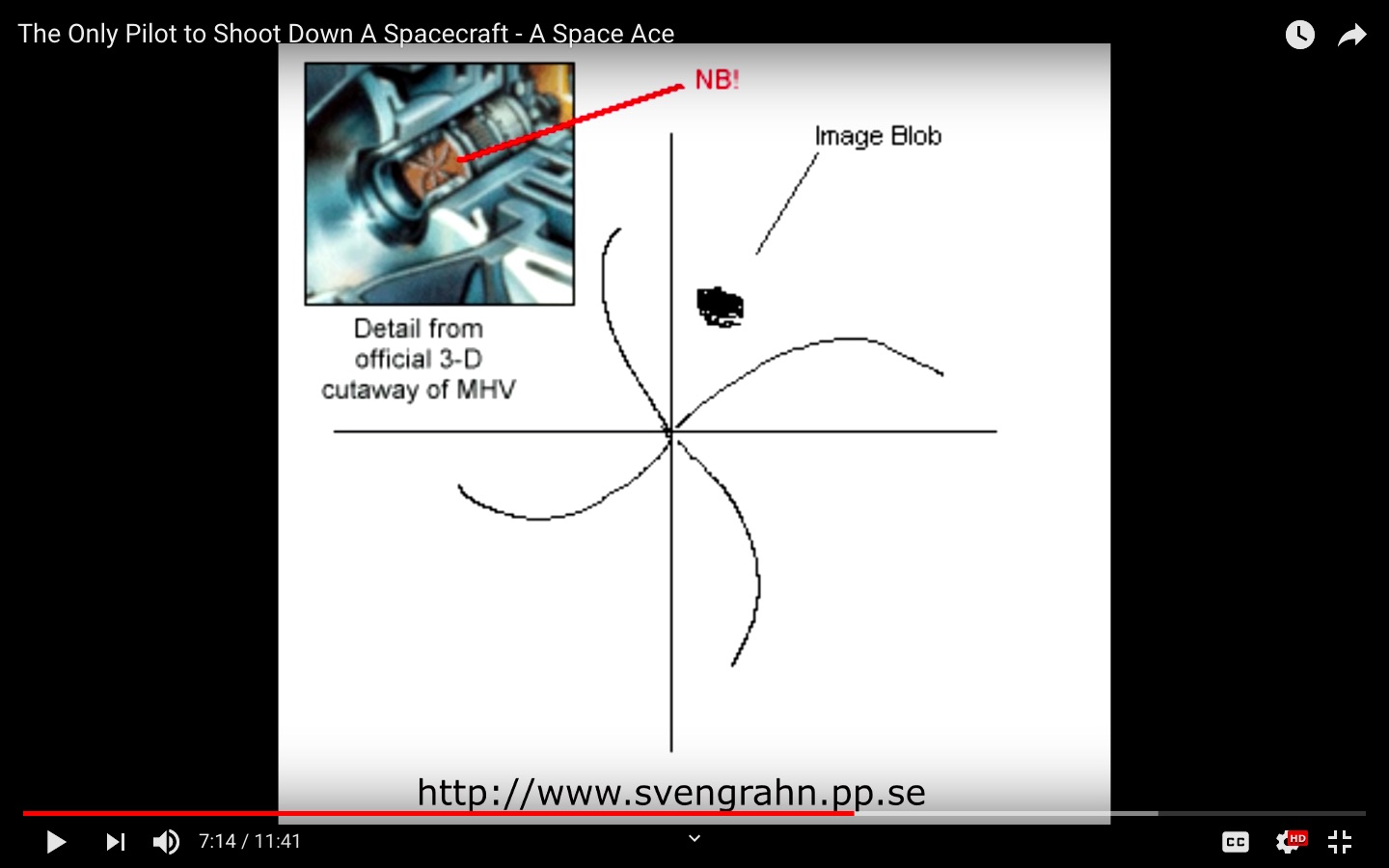 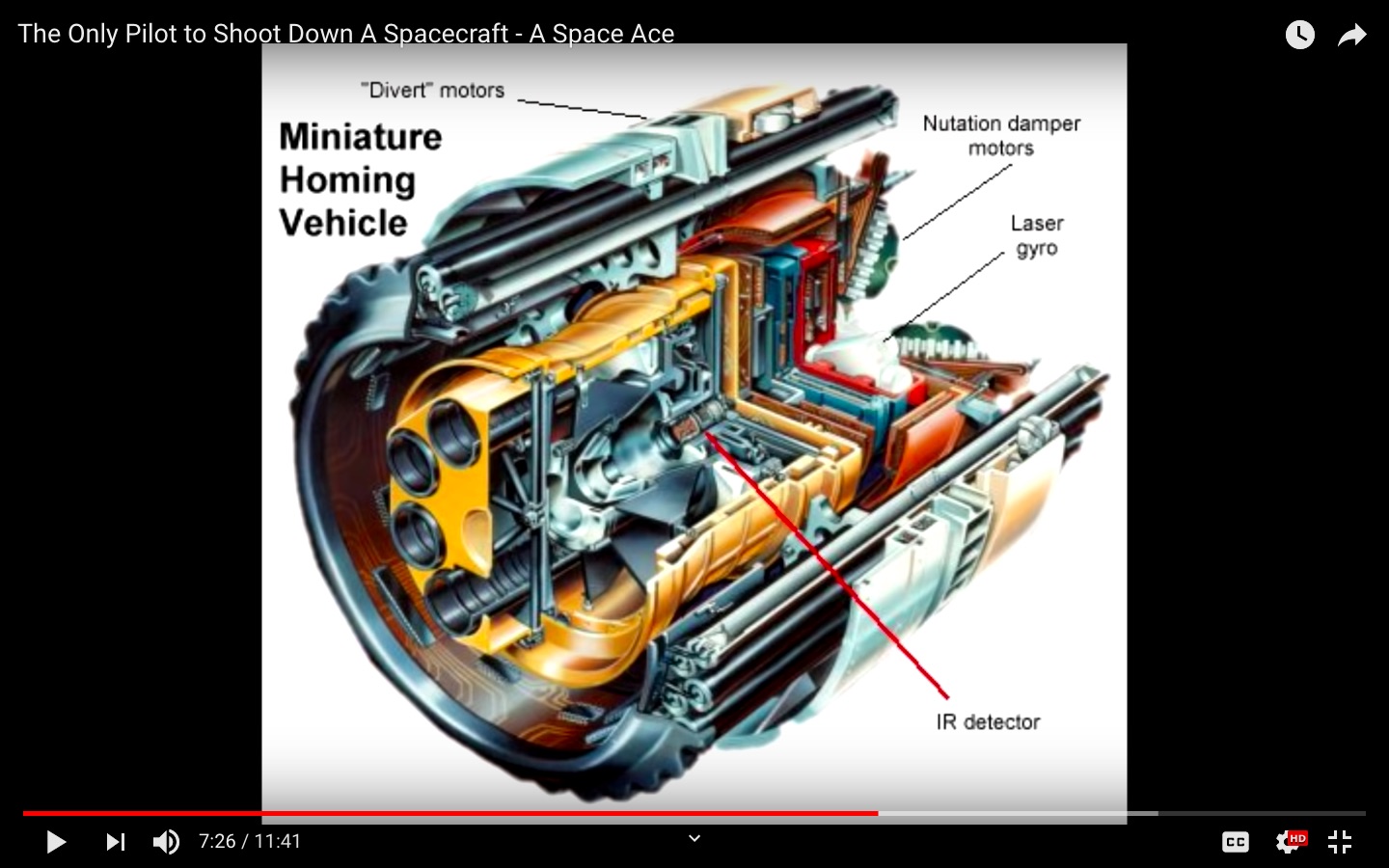 The following is not based on any authoritative information.

Note that the goal is to hit the target. To do that, you want to guide onto a constant bearing, decreasing range situation. If the target is sitting at a constant point on the image plane, you're going to hit it. If it's moving in any direction and you don't take corrective action, that motion will get faster and faster as you get closer and closer, until the target goes flying off to the side and you miss it.

Unlike aiming an antenna or telescope, you're not just rotating to point if there's a target error. Instead, you're using the divert motors to add some sideways velocity to adjust the velocity vector to match. You want to just cancel radial motion of the target position as it happens. If you add enough sideways velocity to move the target back to the center, you've over-corrected and the target will keep moving right past the center. So you're guiding on radial velocity, not radial position.

With rotating radial sense lines, it's hard to sense radial motion. The timing of the crossing remains the same. (The target is growing and not pre-defined in size/shape, so estimating from e.g. how long it takes to cross is hard) With a spiral, the crossing time gets later / earlier as the target moves in and out in radius.

It's true that you don't have an exact phi angle from the spiral, just a rough one. But's that's OK, because you don't need that exactly. First, you can't divert in an arbitrary direction because only have fixed divert motors anyway. Second, remember the goal: to measure how fast the target is moving in and out. You want to have a simple relation, like

but that's exactly the basis for the basic spiral of Archimedes! (A logarithmic spiral is something else) That gives you such simple radial tracking that giving up an little angular tracking was probably an acceptable compromise (or perhaps the straight + cross-hairs was another set of sensors for angular detection)

So here's the tracking algorithm:

Not the answer you're looking for? Browse other questions tagged anti-sat infrared or ask your own question.

34
India just shot down a satellite from the ground. At what altitude range is the resulting debris field?
9
Is India having the military capability to “take out” a satellite in orbit still in question?