Are the power systems on the US and Russian segments of the ISS similar/compatible?

Clearly there is some method of power transfer between the US Segment with the honking big arrays, to the Russian segment.

But since the Russian segment is basically Mir 2 (Zvezda, and an FGB tug which is even older as Zarya), which means it core design was set ages ago, and the US Segment is fundamentally a newer design, how compatible are their power systems?

Though as I think about this, it is likely that the US segment is probably based on the Shuttle experience, which means it is 1970's closer to the Salyut heritage of Mir. So who the heck knows!

Are there transformers/inverters required to transfer power? Or does it all run on a common system?

The Russian segment of the station, like the Space Shuttle and most spacecraft, uses 28 volt DC from four rotating solar arrays mounted on Zarya and Zvezda. The USOS uses 130–180 V DC from the USOS PV array, power is stabilised and distributed at 160 V DC and converted to the user-required 124 V DC. The higher distribution voltage allows smaller, lighter conductors, at the expense of crew safety. The ROS uses low voltage. The two station segments share power with converters.(118)

The USOS solar arrays are arranged as four wing pairs, with each wing producing nearly 32.8 kW.(118) These arrays normally track the sun to maximise power generation. Each array is about 375 m2 (450 yd2) in area and 58 metres (63 yd) long. In the complete configuration, the solar arrays track the sun by rotating the alpha gimbal once per orbit while the beta gimbal follows slower changes in the angle of the sun to the orbital plane. The Night Glider mode aligns the solar arrays parallel to the ground at night to reduce the significant aerodynamic drag at the station's relatively low orbital altitude.(147)

The station uses rechargeable nickel-hydrogen batteries (NiH2) for continuous power during the 35 minutes of every 90-minute orbit that it is eclipsed by the Earth. The batteries are recharged on the day side of the Earth. They have a 6.5-year lifetime (over 37,000 charge/discharge cycles) and will be regularly replaced over the anticipated 20-year life of the station.

The photovoltaic cells were state-of-the-art for circa 2005, but no longer.

ROSCOSMOS had plans to upgrade the power system on the Russian Orbital Segment (ROS):

On June 17, 2009, the Russian Federal Space Agency (Roskosmos) presented to NASA and the other ISS partners a proposal to add additional modules to the Russian segment to ensure its viability past 2016 or even 2020. To this end, a Nodal Module that would be attached to the nadir docking port of the MLM Nauka would facilitate the attachment of two additional, larger modules that would be capable of providing an independent power source to the Russian segment should current plans to deorbit the US segment of the ISS after 2016 move forward. As proposed, the Nodal Module would be launched during 2013 by a Soyuz launcher in a similar fashion to how the Pirs and Poisk MRM-2 modules were lifted to orbit. The two larger modules, nominally referred to as Scientific and Power Producing Modules 1 and 2, would be lifted to orbit via Proton launchers in 2014 and 2015, respectively. These two modules would be attached to the port and starboard sides of the Nodal Module, leaving its aft docking port accessible for possible future expandability and its nadir port accessible for docking by Soyuz or Progress spacecraft. Because of the proximity of the Nodal Module to the planned attachment point of MRM-1 on the nadir docking port of Zarya FGB to facilitate docking of Soyuz and Progress spacecraft, the module's forward-facing port will be unusable. As of January 2010, neither Roskosmos nor NASA have provided further details of these modules or verification that they have been officially funded by the Russian government or added to the ISS launch manifest schedule.

From NASA's Reference Guide to the International Space Station, pg. 90: 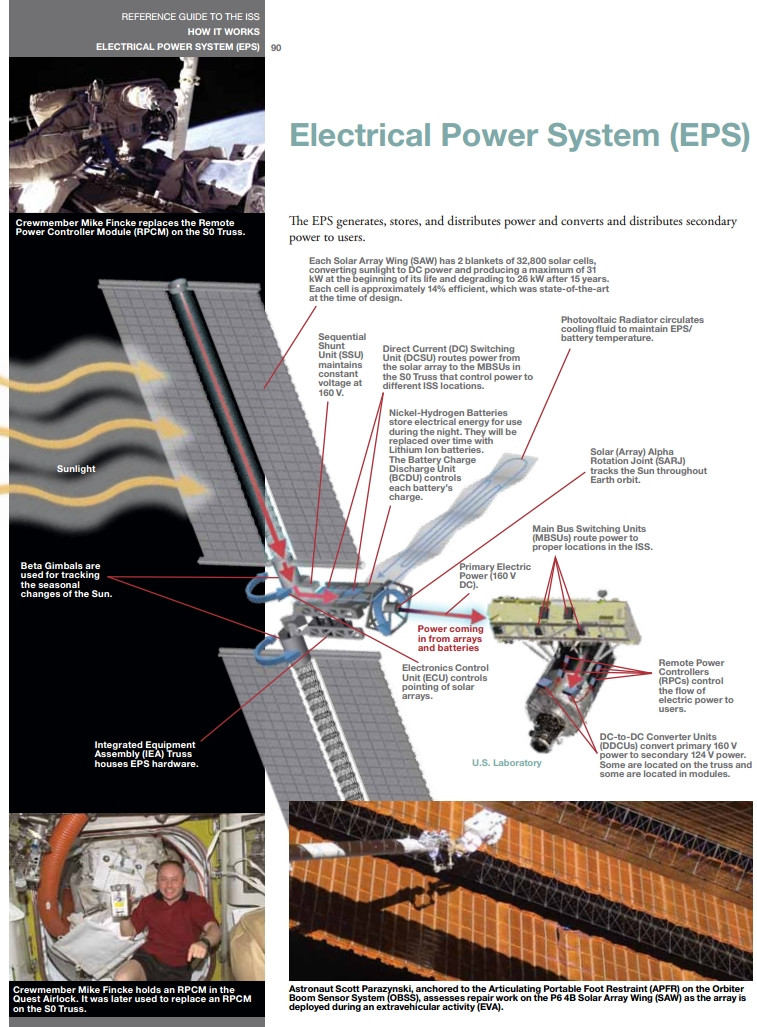 Not the answer you're looking for? Browse other questions tagged iss power design us-segment russian-segment or ask your own question.

19
What materials are the windows on the US Segment of the ISS made out of?
2
Does the ISS currently use “night glider mode” as part of its solar array positiioning plan?

19
Is potable water in the American & Russian segments still stored separately?
19
What materials are the windows on the US Segment of the ISS made out of?
13
What are the windows on the Russian segement of the ISS made of?
4
What are the MDM's on the ISS, and how many different kinds are there?
27
Can the US Part of ISS survive independent of the Russian?
8
How are the US and Russian ventilation systems separated on the ISS?
40
What did the Soviet Union and Russia bring to the ISS?
6
What language is the Russian segment ISS software written in?
3
Are few kilogram RTG's possible with similar mass-specific power to current designs?
4
What are the Basics of CubeSat Power Supplies and Systems?