I have come up with a conceptual idea of a magnetic force-driven space propulsion system. What I believe is very unique about this propulsion system concept is that its working principle should not violate the Law of Conservation of Momentum nor the Law of Conservation of Energy, rather it should work in conjunction with these two laws of physics.

In order to help convey this conceptual propulsion idea, I have created a drawing of a conceptual mechanical device that would use magnetic force to generate propulsion. 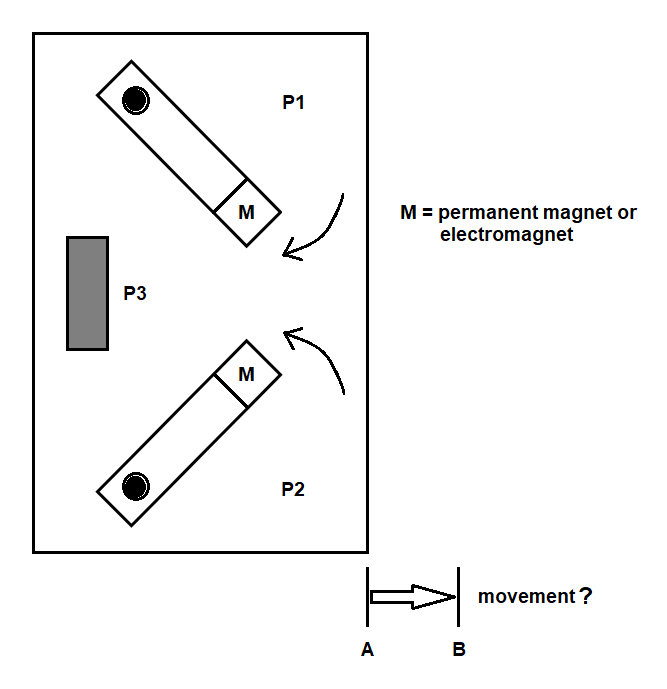 The two magnets are labeled with the letter M and their direction of travel are indicated by the arrows on the drawing. The gray filled square located to the left of P3 is a rectangular block of non-metallic material that is fastened to the board.

The working principle is that one permanent magnet will be positioned at position P1 and the other at position P2 and then they will be released (or turned on if they are electromagnets). Due to magnetic attraction they will begin moving and will accelerate towards position P3. When they reach position P3, the two magnets will impact the rectangular block and should come to a dead stop. The levers’ end positions will be at a 90 degree angle to their starting positions.

Say that this device is located out in interstellar space, far away from any stars and planets, and is at first motionless. Then the two magnets are released from positions P1 and P2. As they travel towards P3, the device\spacecraft should begin moving in the opposite direction and then when the magnets come to a complete stop at P3 due to impacting with the block, the device should immediately experience a decelerating force which will bring the device's movement to a complete stop. The end result should be that the device has moved a certain distance from its original position to a new position in space. I have indicated the direction of this movement with the position A to position B arrow on the drawing.

If there will be movement, then continuous propulsion may be possible via mechanical means. To make the device (and thus the spacecraft) move continuously in only one direction, this could be accomplished with 180 degree rotations of the board. Without the 180 degree rotations of the board, mechanically moving the two electromagnets back to positions P1 & P2 would propel the board/spacecraft in the opposite direction.

For example, after the two levers have come to a stop at position P3, the electromagnets would be turned off, the board would then rotate 180 degrees, the levers would then be mechanically moved back to positions P1 and P2, the board would then be turned 180 degrees, and then the electromagnets would be turned on causing the two levers to move towards position P3. This would be a continuous process. I think the only way to provide enough electricity for this system to work would be via an on board nuclear reactor.

I have shown this conceptual idea to a Physics professor at a college in my local area and I asked him for his professional opinion on whether the motion of the electromagnets would generate any propulsion. This was his answer:

“The answer is that the movement would occur exactly as you state. The system starts out with zero momentum. Then as the magnets swing left, the base has to move right so that the total momentum remains zero. When the two magnets hit the backstop at P3 they stop moving, and the base stops moving, and again the total momentum is zero. To put it another, equivalent, way, the center of the base has moved right, but the center of mass of base plus magnets has not moved at all.

This is another example of a perpetual motion machine. Although you may believe it will produce net motion without violation of conservation of momentum:

We can disregard the specific use of magnetic force because it's not relevant; any method of moving masses around will confront the same underlying issue.

A few other points...

Energy and momentum are always conserved.

Kinetic energy and momentum typically accompany each other, but conversion of kinetic energy to some other form e.g. thermal does not require or imply removal of momentum.

Consider two objects undergoing an inelastic collision (they do not rebound). Each object will undergo a change in its velocity vector, and a change in its kinetic energy. The sum total kinetic energy will decrease, with the difference becoming thermal energy (energy is conserved). The momentum vector of the combined objects post-collision is the same as the sum of the individual momentum vectors pre-collision (momentum is conserved).

5
chemical propulsion with separate fuel and propellant?
0
Could a spacecraft be propelled by the deflection of a very high number of charged particles?
3
Could protons in the Sun's solar wind be used to create a photonic laser thruster for a spacecraft?
4
Walking in a rotating spacecraft and Newton's 3rd Law of Motion
27
Would a grinding machine be a simple and workable propulsion system for an interplanetary spacecraft?
0
Will a spacecraft accelerate in a gravitational field via the use of a powered rotating mass?
1
Could a CubeSat be propelled by this low-tech electromagnetic propulsion system?
1
Could a horseshoe magnet help a satellite stay in orbit?
3
Could the kinetic energy in the Sun's solar wind power an ion propulsion system for an interplanetary spacecraft?