What kind of force is there in exact middle of earth? [closed]

Basically i have one question but this question leads to another.
firstly can we dig in earth that from one side we reach other side of earth ? i mean just going through it. Now let's say we can dig then i wanna know what force will be there in exactly middle of earth ?

i mean let's say i am here standing and facing gravitational force and maybe another man on other side of earth facing same force. so basically we both are opposite to each other and if there is nothing between us we will collide.
It sounds a lil confusing maybe i have drawn this image to explain what i am thinking.What force will be there in exact middle of earth ? something like space ? nothing ? or something like between 2 magnets pushing each other ? 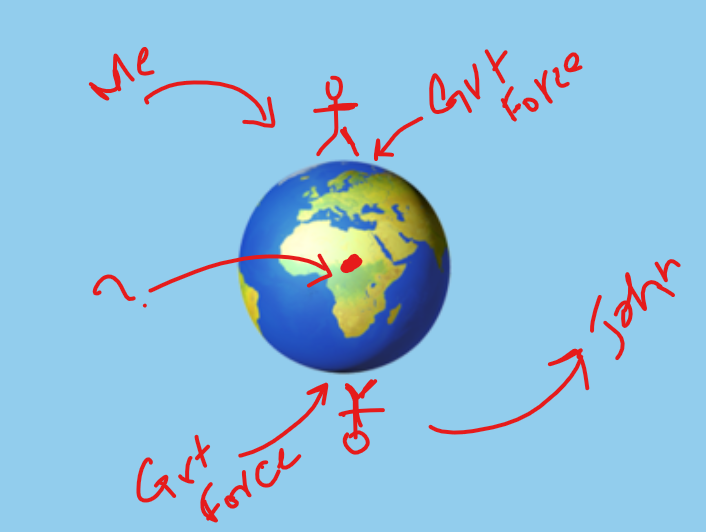 Edit : As many people have responded beautifully i wanna know why everyone is considering all these Environmental conditions ? When we talk about a theory don't we take things ideally ? obviously we should consider other factors. But shouldn't we consider IDEAL situation ?

In this answer, I'm going to assume the tunnel is a perfect vacuum and there's no intense heat or pressure. This is a thought experiment.

If you and John fall at the same time, you guys will meet approximately 20 minutes after you jump into the tunnel. Depending on how wide the tunnel is, you guys will most likely collide at a velocity of around 11 km/s. That's Apollo's command module re-entry speed! You will accelerate until you reach the center of the Earth, but once you reach the center, you will decelerate and deceleration will take another 20 minutes because now you have to undo all that velocity. So you will fall endlessly like a pendulum in a vacuum. Now if there's air resistance, then you will slow down until you stop and reach the center. Terminal velocity is around 195 km/h (differs depending on your drag coefficient (aerodynamics)) so it would take around 32 hours to reach the center (ignoring the gravity gradient).

So the answer to your question: If the tunnel was a vacuum, both of you would be falling endlessly. You would reach John's side, John would reach your side, and vice versa.

Exactly at the center-of-mass of the Earth there is no net gravitational force. Gravity comes from mass, and all the mass of the Earth is evenly distributed around the center-of-mass (by definition), so all the forces cancel out. As you get deeper and deeper, the net gravitational force falls -- linearly if density is constant.

In practice, of course, you can't dig a hole that deep; much of the interior of the planet is flowing molten rock.

If you could magically make a stable, not-ridiculously-hot tunnel through the planet, and you and your antipodean friend each jumped into one end of the tunnel, you'd fall toward the center and meet there.

According to a crude simulation I've worked up, if standard sea level air pressure was magically maintained throughout the entire tunnel, you'd be moving at somewhere around 0.25-0.75 meters per second when you reached the center -- it depends on whether you spread out to catch as much air as possible, or straightened out in a headfirst dive to maximize your speed. In the median case you get to the center moving at 0.5 meters a second after a 48-hour fall! That's slow enough that you and your friend should be able to hug without injury when you meet. My simulation assumes constant density of planet all the way down, which is obviously not right, so you'd probably collide a little bit faster than that, but not greatly so.

If you pumped all the air out you'd be accelerating all the way down, but as you got closer to the center and more and more of the Earth's mass was "behind" you, your rate of acceleration would reduce; just as you got to the center the acceleration would tend toward zero, but of course your accumulated velocity would still be extremely high. It would take ~21 minutes to fall, and you'd reach the center at ~7900 meters/sec -- a figure which is suspiciously close to circular orbit velocity, by the way.

With no air and no obstruction in the tunnel, you'd shoot through the center, and the acceleration you experienced on the way down would be exactly reversed on the way up the other side. When you reached the opposite end of the tunnel, your velocity would be back to zero, and you'd start falling back to the center. Without any drag or friction involved, the end result would be that you'd bounce back and forth from one end of the tunnel to the other forever.

If you lowered yourself carefully down a 6400 kilometer cable to the center and let go, you'd be in free-fall at the center and wouldn't go anywhere.

Here's the Python code for my sim.

In terms of gravity, there will be no force (ish). This is a consequence of the shell theorem, which states that inside a sphere of constant density the shell of the sphere exerts no gravitational force. Now, some caveats:

So all this says that the force of gravity is zero ideally, negligible in practice. But as others have said, just about everything else will kill you :-P

Welcome to the site!

Regardless, it sounds like you're trying to develop a gravity train

Not the answer you're looking for? Browse other questions tagged physics earth science or ask your own question.

27
What does the Sun-Earth-Moon system look like from the Sun-Earth L-2 point?
7
What Earth gravity model is used for different types of calculations?
2
Are there any protocols the space station follows if there is an Earth-wide catastrophe?
5
Is there any life from Earth that can live on Mars?
3
Have there been any spacecraft with an ecliptic Earth orbit?
8
What materials are naturally released into space from earth?