What is being shown on August 27th from the NOAA ACE satellite?

I found the following data pertaining to Earth's magnetic field for the previous 7 days. You can access this data from the NOAA ACE satellite page which shows real-time data from the satellite.

Being entirely honest, I'm not sure what the numbers or graphs mean, but the pattern recognition part of my brain noticed the yellow's increase on the 27th corresponded to a bunch of other wild variations on the other graphs for that time period.

Could anyone explain exactly what these graphs mean, and, taking it a step further, take a guess at what happened on the 27th (if anything)?

While the answer of Michael Stachowsky and the comments under that provide the answer to what you're seeing, I think some more context can be helpful.

The plots shows are a product from the NOAA Space Weather Prediction Center, which, as the name implies, is a weather center for space weather. This is a conceptual term to describe the time-varying conditions in the solar system, in particular around the Earth. Two important components of space weather are the particles emitted by the Sun (solar wind) and the interaction of the Earth's magnetic field with the interplanetary magnetic field.

The reason people are interested in space weather is because of the impact space weather has on us: small weather events upset satellite communications, larger events can cause serious damage on Earth (see solar storm of 1859).

The Advanced Composition Explorer (ACE) satellite has been monitoring space weather since 1998. Since 2016 the Deep Space Climate Observatory (DISCOVR) is the primary provider for space weather data, although ACE is still operational and used as back-up. The DISCOVR real-time solar wind parameters can be found here.

Both are at the L1 Lagrange point and can provide us with an early warning of space weather upsets about an hour in advance. 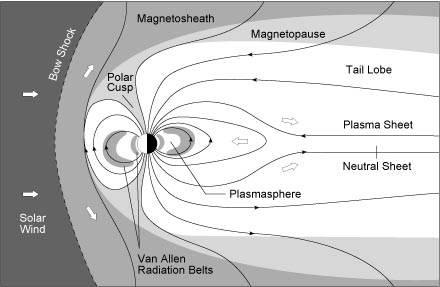 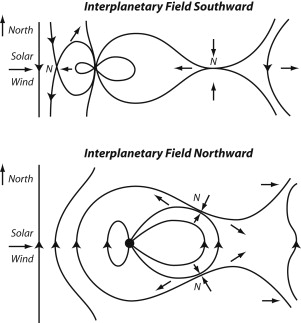 When the IMF points south, the field can connect with Earth's magnetic field (source).

The whole interaction between IMF and the Earth's magnetosphere is pretty complicated and probably Astronomy.SE can give much better explanations than what I can give here. 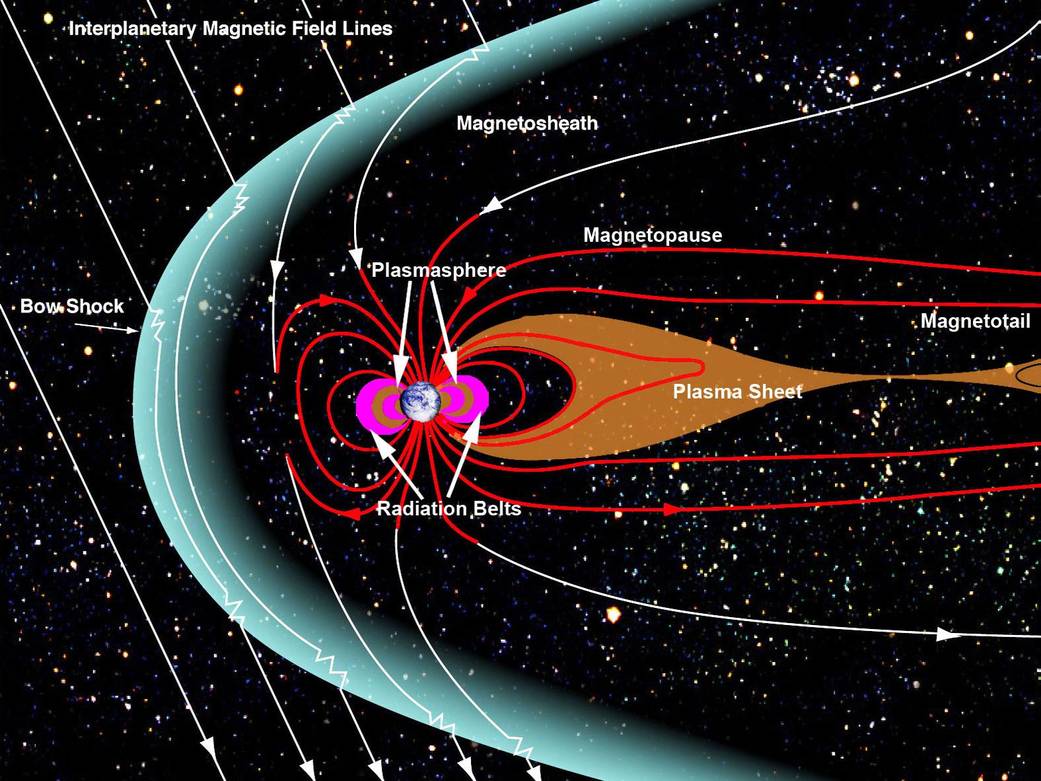 Popular websites like Spaceweather.com and Spaceweatherlive.com focus on the possibility of seeing aurora's ("Northern lights"), which can occur if the IMF is strong ($B_t > 30$ nT), pointing southwards to allow the connection of the field lines ($B_z < -10$ nT) and a lot of hot, fast, charged particles (high density, speed and temperature), which are conditions that were showing in the graphs on the 27th ("aurora's not guaranteed"). Often, you'll see these numbers aggregated in a single number called the $K_p$ index, which is a measure for the intensity of space weather and its impact on Earth. Often, $K_p > 5$ is a sign to watch out for aurora's.

However, as you can see on this page of NOAA SWPC, there is a lot more to worry about than pretty lights.

What you are looking at is the Real Time Solar Wind (hence RTSW). This shows particle density, speed, and temperature (along with the first two graphs, which I'm afraid I don't know). Because the future is awesome, we have a website called "spaceweather.com", which tells us that the increase on August 27th was due to two "solar wind streams" approaching Earth source here, which is exactly what we see - increased particle activity, including increased density, speed, and therefore temperature.

Not the answer you're looking for? Browse other questions tagged raw-data noaa or ask your own question.

76
Was the NOAA-N Prime satellite really dropped on the floor?
8
"UK schoolboy corrects Nasa data error" - what precisely was the "error"?
10
What is the preferred technology for bulk data storage on a modern space probe?
51
Why would NOAA restrict the ability of SpaceX to live stream the second stage?
6
Why does the NOAA require a permit to be issued to stream images of the earth?
4
What are InSight's barometric and seismic digitization rates and frequency responses when it "listens to the wind"?
1
How can the download speed increase from space probes?