How close was the U.S. DoD to getting their own space shuttle?

This answer explains that the U.S. Department of Defense (DoD) had plans for their own space shuttle. The so-called "blue shuttle" would be operated by the U.S. Air Force out of Vandenberg Air Force Base. Although launch facilities were built at Vandenberg, they were never used, and the idea was scrapped in favor of using NASA's orbiters and facilities for missions.

How far did the plans for DoD's own shuttle orbiter get? This might include

I'm only asking about the orbiter, not Vandenberg or other aspects. It's possible that the answer is "there was nothing more than talk."

The plan was not for the Department of Defense to have an additional Orbiter built for it. Instead, the Orbiter Discovery (OV-103) was to be dedicated for DOD use and based at the Vandenberg launch site. (Space Shuttle, Dennis Jenkins, 1992 edition, page 151)

Prior to the Challenger accident, when NASA was preparing to launch the space shuttle from Vandenberg AFB, OV-103 was the dedicated vehicle for the Air Force. Because of this, she had a different TPS design.

Reentries coming into Vandenberg . . . had a higher cross range requirement, meaning as you’re descending you had to come off of your normal inclination and turn into Vandenberg at a much farther distance from your normal trajectory, which means you had to put it down steeper and you’re getting higher heat loads. So it had a different TPS design on the underbelly of the vehicle.

Quote is from Bill Roberts interview at the JSC Oral History page.

To address "how far did it get" the plans for the first Discovery mission out of Vandenberg (STS-62A) were well along. We had started building training loads in the Shuttle Mission Simulator for the mission, I myself flew launches out of Vandenberg in the simulator. This means that the flight software had been processed and configured for the West Coast launch prior to its incorporation in the training load.

It would have been the seventh mission of OV-103. Her third mission, STS-51C, was a dedicated Air Force mission.

This crew assignment sheet from September 1985 shows 62-A on the manifest. Flights from Vandenberg, using the confusing naming convention of that time, were to have a "2" as the final number digit of the flight number. A second Vandenberg launch, 62-B, is shown, but had no crew assigned yet.

When this list was produced, STS-51I had flown, and STS-51J was next up. So 62-A was seven flights in the future. I personally felt the chances of that happening as scheduled were slim - there was a lot to be done, especially the qualification of the Filament Wound Case (FWC) Solid Rocket Boosters (SRBs) planned for Vandenberg launches. (FWC SRBs are mentioned in this paper Space Shuttle Solid Rocket Booster Lightweight Recovery System) Wikipedia gives 15 July 1986 as the planned launch date, but does not say as of when. 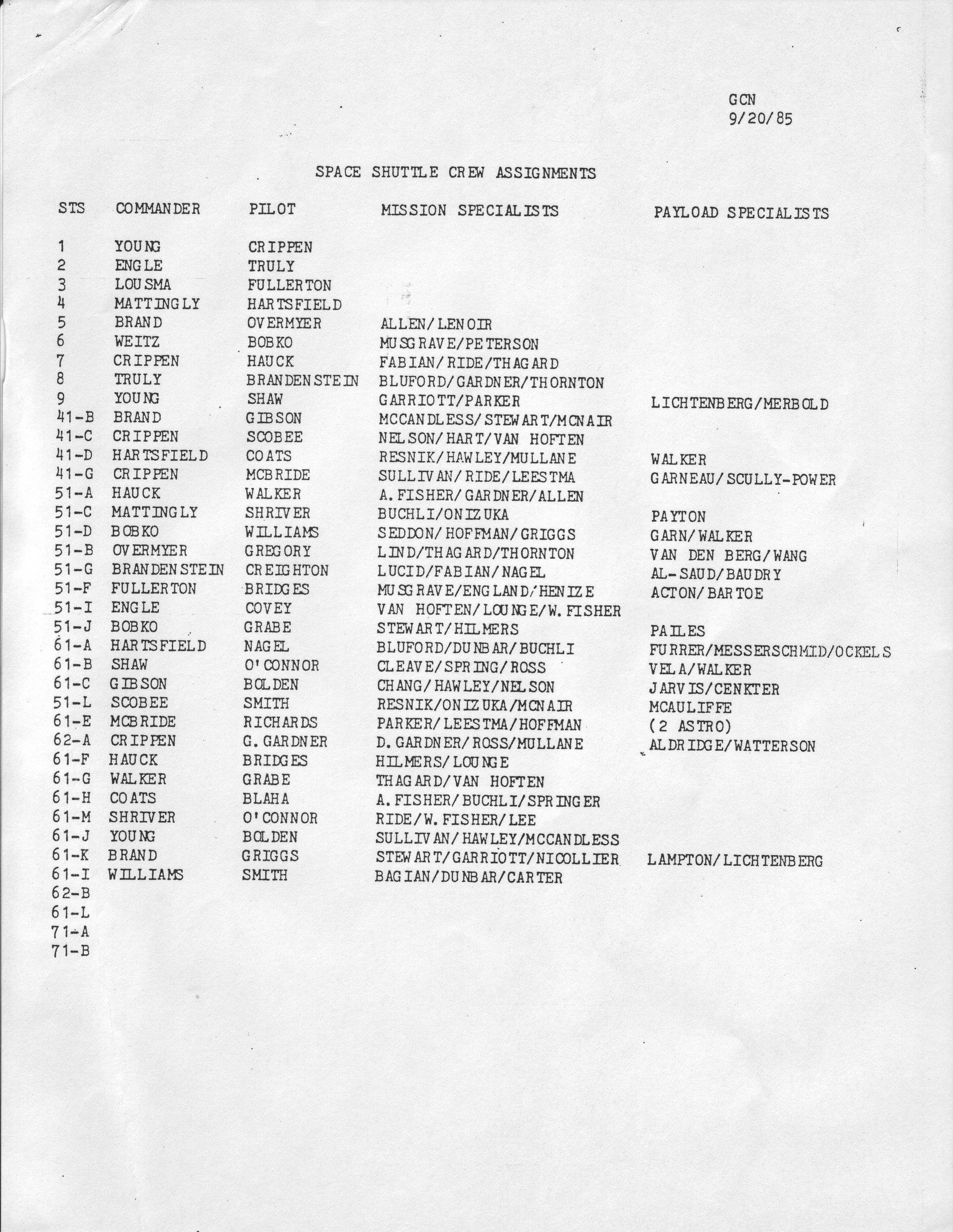 Not the answer you're looking for? Browse other questions tagged space-shuttle military united-states or ask your own question.

32
Did the Space Shuttle have "military uses"?
27
What were the differences between the STS Orbiters?

32
Did the Space Shuttle have "military uses"?
8
Does the U.S. still manufacture technologies for its space program that would otherwise be obsolete?
22
Why does the U.S. military maintain their own weather satellites?
13
How was the space shuttle fuelled?
5
Why would the Shuttle-Transtage have been unusable for science missions?
33
Was the Space Shuttle ever actually intended for the military to steal satellites without the owner's consent?
3
Could DOD earth observation (i.e. spy) satellites have photographed the Columbia Orbiter on STS-107?
19
How 'space ready' was space shuttle prototype Enterprise?