Why would low pump inlet pressure result in such a spectacular explosion? (Vanguard TV3)

In the short US Naval Research Laboratory video Vanguard 60th Anniversary: A Look Back at about 03:46, Mr. Alton E. Jones says:

Most people are curious about as to what was the cause of the TV3 failure, of the famous one where it rolled over and left the little six-inch satellite down on the ground there. As I understood it there and I’ve confirmed it with Paul Karpiscak who was “Mr. Propulsion” in the field, it was a low inlet pressure to the pump, and I guess there were some disagreements between Martin and GE as to exactly what caused that low inlet pressure.

The fix in any case was to over-pressurize the tanks for the starting transients. They did not change the final setting, but they manually overrode to pressurize the tanks, and there never was a repeat of anything that resembled that, so there must have been low pressure, that’s all I can say.

Question: What kind of engine was used for TV3 and why would low pump inlet pressure result in such a spectacular explosion? (see video Vanguard TV3 Failed Rocket Launch)

This picture (from the document linked below) shows the Vanguard engines; the first stage engine is in the rear. 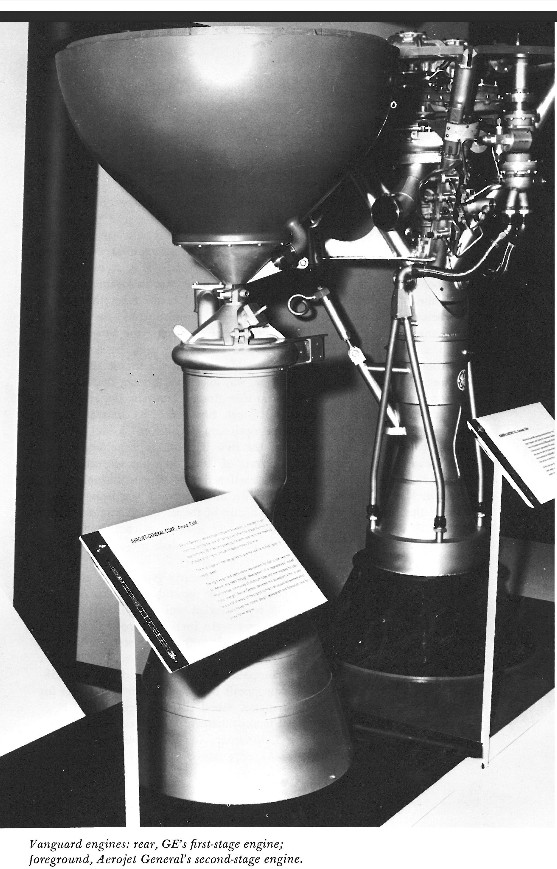 The engine was an X-405 built by General Electric. The launch vehicle was built by Martin Marietta. These two contractors differed on the exact cause of the explosion, as the question states.

The Martin people traced what they called an "improper engine start" directly to a low fuel tank pressure which was responsible for a low fuel injector pressure prior to the start of the turbopump operation. The low injector pressure allowed some of the burning contents of the thrust chamber to enter the fuel system through the injector head. Accord­ing to this version of the accident, fire started in the fuel injector before liftoff, resulting in destruction of the injector and complete loss of thrust im­mediately after liftoff.

They traced the immediate cause of the explosion to a loose connection in a fuel line above the engine. Their reading of the telemetered and photographic data was that there was no "improper start." On the contrary, the engine had come to full thrust, only to lose thrust when a little leaked fuel on top of a helium vent valve blew down on the engine.

I think what they are talking about is a "burp" where the chamber pressure in the engine gets higher than the feed system pressure and hot gas flows upstream into the propellant system. In this case the reversal of the desired pressure gradient seems to have been caused by the feed system. Maybe the turbopump cavitated?

Regardless of the cause, the engine (or feed system) explosion was relatively minor but it resulted in a complete loss of thrust almost immediately after liftoff. The vehicle fell almost vertically back down and crumpled; all the propellants spilling down and being ignited by the already-burning wreck of the engine caused the "spectacular explosion".

You can see the engine (or feed system) explode at 0:28 in the second video, then the vehicle falls, then the big bang at 0:31.

This schematic of the first-stage propulsion system is from the same text. 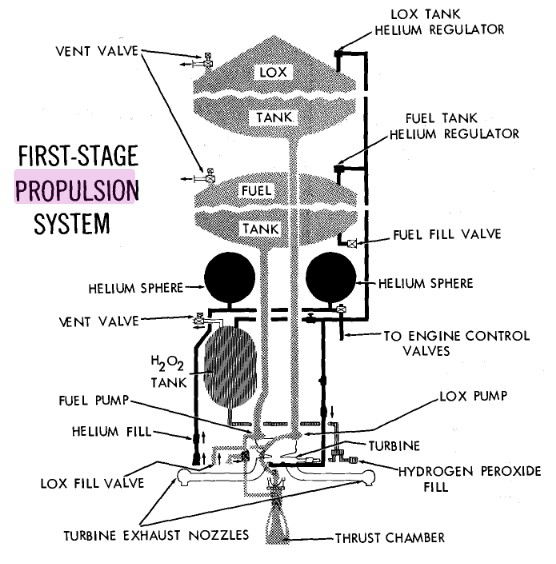 Not the answer you're looking for? Browse other questions tagged launch history failure vanguard or ask your own question.

5
What is a rocket engine “burp”, and why does it happen?
2
Connection between Vanguard spacecraft, Vanguard rocket, and Project Vanguard?

8
How vulnerable could space launch vehicles be to a “lone gunman”?
5
What was so “Mini” about Minitrack?
2
Connection between Vanguard spacecraft, Vanguard rocket, and Project Vanguard?
27
Why would such a powerful computer (or a computer at all) be needed to go to the Moon?