slowest crash on the Moon?

What is the slowest crash landing speed (both tangential and vertical)?

Edit 1: I would like a crash trajectory be at the most 30 degrees from vertical.

The orbital maneuver to perform the Hohmann transfer uses two engine impulses, one to move a spacecraft onto the transfer orbit and a second to move off it.

Any way to end up on the moon without a 2nd burn? If yes, what would be the collision speed.

BTW, If this is really too vague of a question I have no problem deleting it.

tl;dr: I don't think there is any scenario where you can strike the Moon with low velocity by using a small impulse to leave orbit. You can hit sideways with an orbital velocity of about 1680 m/s, or vertically with escape velocity the square root of 2 larger at 2376 m/s.

When in orbit around Earth, say at 400 km, "a final push to de-orbit" would be a small impulse to lower the perigee to about 100 or a little higher. Then each time the spacecraft passed near perigee it would loose a little more velocity due to drag, slowly circularizing near perigee. After that, it would spiral due to drag and eventually reenter the main part of the atmosphere and quickly either burn up, or fall to the ground if it had proper heat shielding and aerodynamics.

But the Moon is tricky. If it were a nearly perfect gravitational sphere, then your burn would lower the perilune to just above the average lunar surface where it would strike whatever boulder or crater rim might be sticking up. This would happen at the lunar orbital velocity given by the vis-viva equation

Since the Moon has quite a lumpy gravity field all you need to do is to bring the spacecraft to a very low orbit and just wait. Due to gravitational perturbations, or those from the Earth and Sun, eventually its constantly changing orbit will bring it into contact with the surface.

There are no small orbital corrections from a low lunar orbit that can bring it down within 30 degrees of vertical. You'd have to do a major burn to loose most of that 1680 m/s of orbital velocity very quickly, so that it would just "fall straight down".

If the Moon were all alone in space, you could put yourself in an absurdly high lunar orbit, let's say 1 million kilometers. At that altitude your orbital velocity would be only 70 m/s and a delta-v equal to that would stop you in your tracks. However, then you'd fall towards the Moon and accelerate.

If you plot those versus the starting semi-major axis, you can see that the delta-v you'd need to fall out of orbit, which is the orbital velocity, drops with increasing altitude, but the resulting impact velocity due to acceleration towards the Moon rapidly rises.

There's no gentle delta-v followed by a gentle impact. 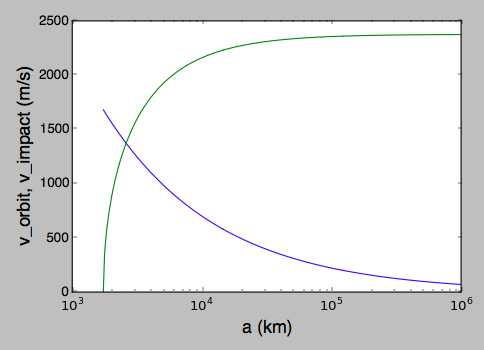 What about a clever 3-body orbit?

But what if I know about the chaotic 3-body orbits of minimoons that uses both the gravity of the Earth and the Moon, and I wanted to look for a crazy orbit that starts near a stable orbit, but "goes chaotic" and eventually touches down on the surface of the Moon, or slows very close to it?

This doesn't happen. I think there is a good Stack Exchange Q&A on this somewhere in Space Exploration, Astronomy, or Physics, but I can't find it.

The argument goes like this: orbits work just as well forwards and backwards in time. So if such an orbit existed, then the backwards scenario would also have to be possible; you'd be able to hold a rock near the surface of the moon, give it only a slight nudge, and it would mysteriously start flying away from the Moon and end up in a high orbit.

That doesn't happen, it just falls to the surface with a silent but none-the-less perceived thud.

Yes, you can hit the Moon with a spacecraft much in the way you can hit somebody in the head with a snowball even when they're running, and it's been done a couple of times. Some of the earliest US and Soviet lunar missions were effectively snowballs that we threw at the Moon, of which the first was the Soviet Luna 2 probe, which you can read about here.

The orbital problem can be unintuitive and tricky if you're not used to thinking about such things, so it may help to simplify the problem to a suborbital one which doesn't really require mathematics for our intuition to come up with the right answer.

Landing on a celestial body is effectively the same problem - no matter which way you approach it, you're falling into a gravity well. All free-fall trajectories are accelerating trajectories, and that acceleration is always in the direction of the surface you're trying to land on. Without an atmosphere to slow you down (to at least terminal velocity) you'll always be speeding up on your way to the ground. There's no free lunch - if you want to stop slowly you have to expend energy to do so. Given that constraint, the most efficient way to make such a controlled landing has popularly (thank KSP) gained the term Suicide Burn.

Not the answer you're looking for? Browse other questions tagged orbital-mechanics the-moon or ask your own question.

38
What is a "suicide burn"?
10
Can an asteroid enter Earth orbit?
13
Can astronauts hear sounds during space walks for repairs?
17
How to calculate Delta V for lunar flyby
8
What's the eccentricity of an orbit (trajectory) falling straight down towards the center?
9
Have there been any documented mini-moons since 2006 RH120?

8
Could Cassini crash land on Mercury?
16
How accurate is the patched conic approximation when performing a Hohmann interplanetary transfer?
11
Mars Orbit Upon Intercept
11
Why did NASA intentionally crash the Lunar Atmosphere and Dust Environment Explorer (LADEE) on the moon?
24
When you shoot for the moon and miss, where do you end up?
9
How feasible is the Moonspike mission?
9
Orbit stability
11
Does going to Mars take the same energy as making a rendezvous with something going to Mars?