How would the shuttle perform various attitude changes during ascent?

How would the Space Shuttle have performed each of the following maneuvers during ascent?

I'm looking specifically for which engines would be gimballed for each maneuver and in which direction. It is my understanding that engines were not throttled nor were the flight surfaces adjusted for attitude changes, but if I am mistaken, please include those changes as well. Assume that the solid rocket boosters are still operating.

In practice, attitude control during ascent was automated and performed in combination as needed, rather than the individual maneuvers of this question. This answer describes the two programs that normally occurred in ascent, and this answer describes how deviations from the intended attitude were automatically corrected. However, those answers still describe actions as pitch/yaw/roll, rather than how those are performed by the engines. 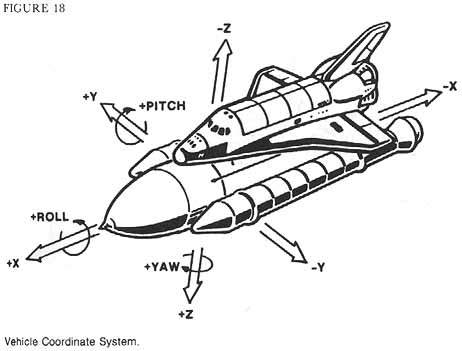 Also related: Pitch and yaw axes of rocket systems such as Apollo

During first stage both the SSME engines and SRB nozzles gimbaled to provide thrust vector control (TVC); the SRBs provided most of the control authority due to their long moment arm and high thrust.

For all of your sub-questions, the TVC would move the thrust vector slightly to rotate the vehicle in the desired direction.

Nose up pitch: nozzles deflect up 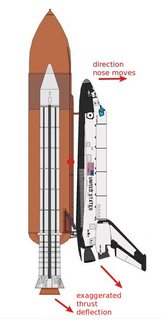 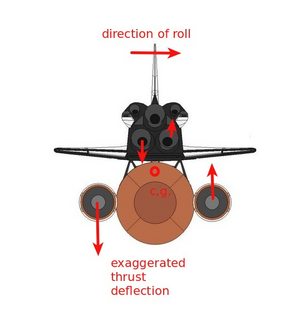 Reverse the deflections to go in the opposite direction.

The elevons deflected slightly in first stage for aerodynamic load relief, but not for vehicle control. Throttling was not done for attitude control. The c.g. location in the pictures is representative only.

Read about the Ascent Thrust Vector Control system in detail in the SCOM page 2.13-45 forward.

Not the answer you're looking for? Browse other questions tagged launch space-shuttle attitude or ask your own question.

15
Why did the Space Shuttles perform a rollover maneuver during launch?
4
How are rockets gimballed to produce a gravity turn for the space shuttle?
9
Pitch and yaw axes of rocket systems such as Apollo

10
Were the aerodynamic control surfaces of the Space Shuttle used during ascent?
15
Why did the Space Shuttles perform a rollover maneuver during launch?
9
Coordination of RCS on Apollo CSM/LM
8
How fast can the space shuttle change its attitude in space?
10
What ever happened to SpinSat - did it work?
3
Confusion with Apollo CSM attitude maneuvers (roll, pitch and yaw) during coasting to/from the Moon
5
How exactly was Apollo CSM attitude changed (from a current one to a new required one)?