Why were Europe's first few satellites so stylish? Why the pronounced alternating white and black stripes?

In The Century of Space Science, edited by J.A. Bleeker, Johannes Geiss, M. Huber, viewed in Google books I ran across the following text and images.

Both satellites are quite stylish looking and have very pronounced alternating white and black stripes.

Presumably the satellites would not be exposed until they are in space when the fairing or nose cone can open, so they would be too far away to see clearly in a telescope so that rotation or tumbling would be visible.

Question: Why were Europe's first few satellites so stylish? Why did they have very pronounced alternating white and black stripes, and had Vanguard-like antennas, but not its shiny reflective metallic finish1,2. 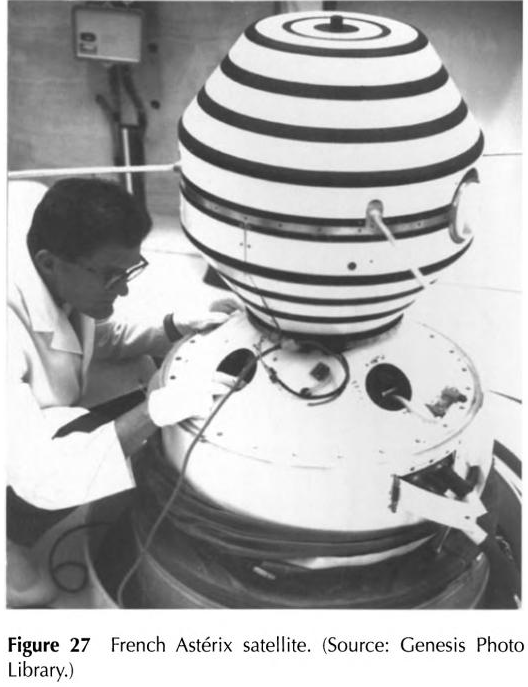 The fruits of these investments were soon to be seen. On 26 November 1965, a Diamant rocket rose from the Hammaguir launch pad and placed into orbit the first French satellite, significantly called Astérix. France thus became the third space power and confirmed its claim for an independent role in this important strategic field.

Astérix was a 42 kg test satellite whose role was to confirm the rocket’s ability to place it into orbit. Ten days later, on 6 December 1965, an American Scout rocket launched France’s first scientific satellite, FR-1. This satellite, weighing 60 kg, had been developed by CNES and carried instruments for studying ionization irregularities in the ionosphere and the magnetosphere. It was launched from Vandenberg and placed into a near-circular orbit. 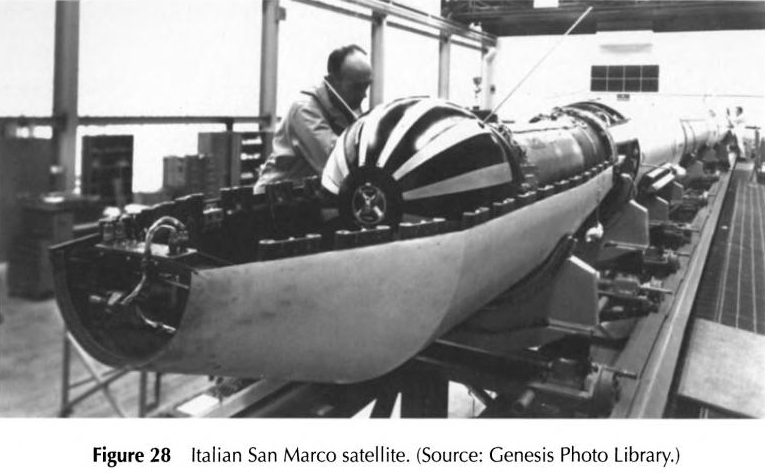 Broglio was quick to react to NASA’s offer of collaboration in space research. In 1962, Italy and the USA signed an agreement for the so-called ‘San Marco’ project, and two eyars later, on 15 December 1964, the first Italian satellite, San Marco-1, was launched by a Scout rocket from Wallops Island. It was a sphere with a diameter of 66 cm and weighed no less than 115 kg. Built by the University of Rome’s Centro di Ricerche Aerospaziali under the direction of Broglio, this was the first all-European satellite to circle the Earth. A second San Marco satellite was launched by Broglio’s group in 1967 from a platform anchored in the Indian Ocean off the coast of Kenya, and the programme continued in the following decade.

1Puzzler: Is this a Sputnik?

2This BBC photo does not show a replica of Vanguard-1, what might it be?

To address only Astérix: Space Archaeology has a different picture and a writeup: 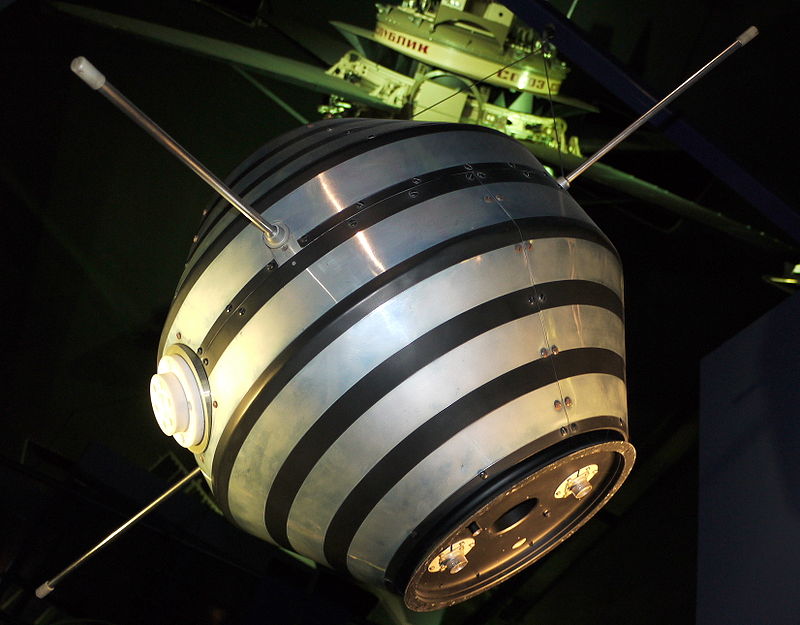 Weighing 42 kilograms, the satellite was a distinctive striped fibreglass spinning-top shape half a meter in diameter, the black stripes to provide passive thermal control.

I suspect the picture is of a replica, and this is not a primary source, but maybe it'll do until something better comes along.

Several of the early satellites, including the first US satellite, Explorer, used black and white stripes to control the satellite's temperature by adjusting the a/e (absorptivity-to-emissivity) ratio. (Ref 1 and image below) The white strips have low absorptivity and low emissivity while the black stripes have high absorptivity and high emissivity. The first US satellite to use a thin film temperature control coating (rather than black and white stripes) was the Vanguard satellite launched in 1958 (Ref 2). The Vanguard coating was developed by Thomas Cox and Alan Bradford under the direction of Georg Hass (Ref 3) working at the Ft. Belvoir Engineering Research and Development Laboratory that later became the Army Night Vision Laboratory. Georg Hass also helped jump start optical thin film work at the newly formed NASA by mentoring James Heaney (Ref 4) at Goddard Space Flight Center. Heaney became a leader in NASA's optical thin film application to many programs, including the James Webb Space Telescope and the temperature control coating for the Wilkinson Microwave Anisotropy Probe (Ref 5) 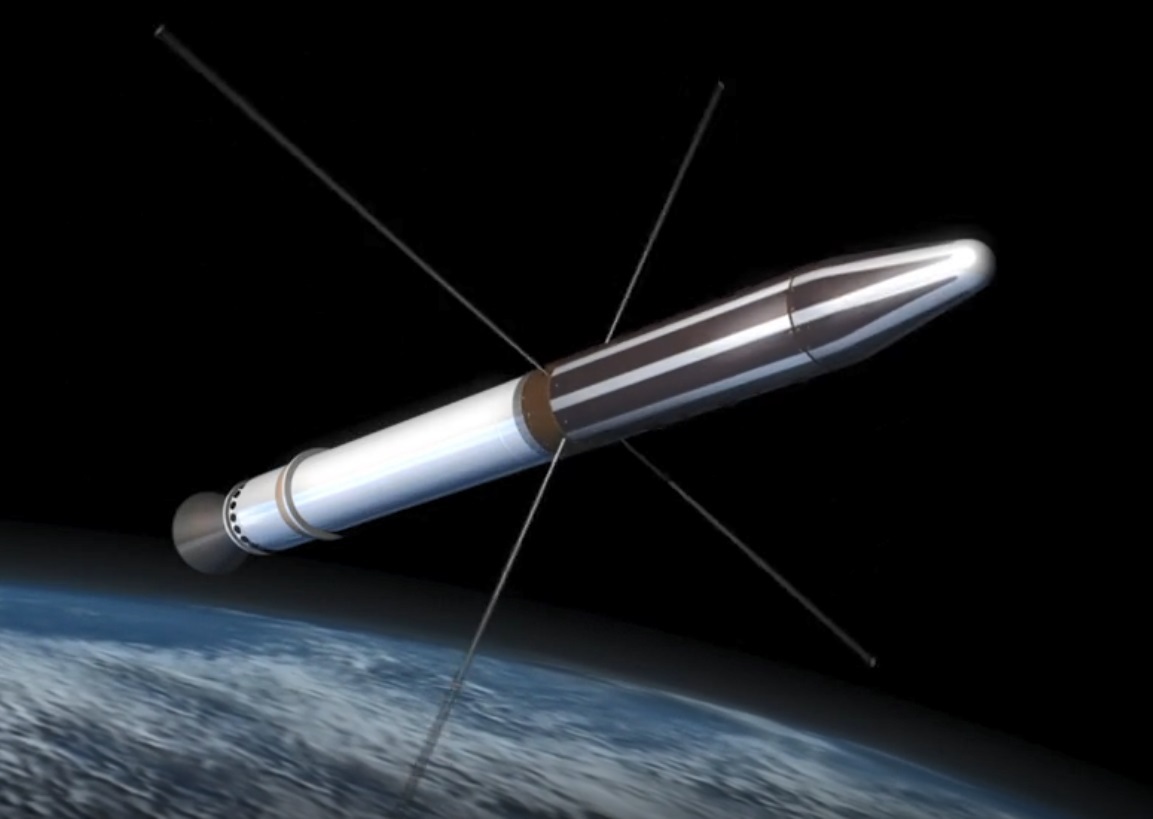 Much has changed in the last half century or so. Spacecraft outer surface coatings, with few exceptions, must now be electrically conductive to minimize the possibility of ESD (electro-static discharge). Many spacecraft don't have a thermal control coating, utilizing MLI (multi-layer insulation) instead. You can see this MLI in the figure below showing the New Horizons spacecraft. The gold color can be due to gold coated Mylar or aluminum coated Kapton (Ref. 6). On the left is the RTG (radioisotope thermal generator) whose outer surface is black for maximum emission of heat into space. On the upper right is the cold patch of the passive cooler for Ralph**. The patch appears white in the visible so as not to overheat the sensitive detectors when in the inner solar system, but is very black (high emissivity) in the infrared, so cools the detectors to less than 135 K when in the outer solar system (Ref 7). These are examples of three different kinds of thermal control surfaces: one black (emissive) at all wavelengths, one highly reflective at longer visible wavelengths and the infrared, and one highly reflective in the visible and highly emissive in the infrared.

** Ralph as in Ralph Kramden from the old Honeymooners show! (It's next to a UV spectrometer called Alice). 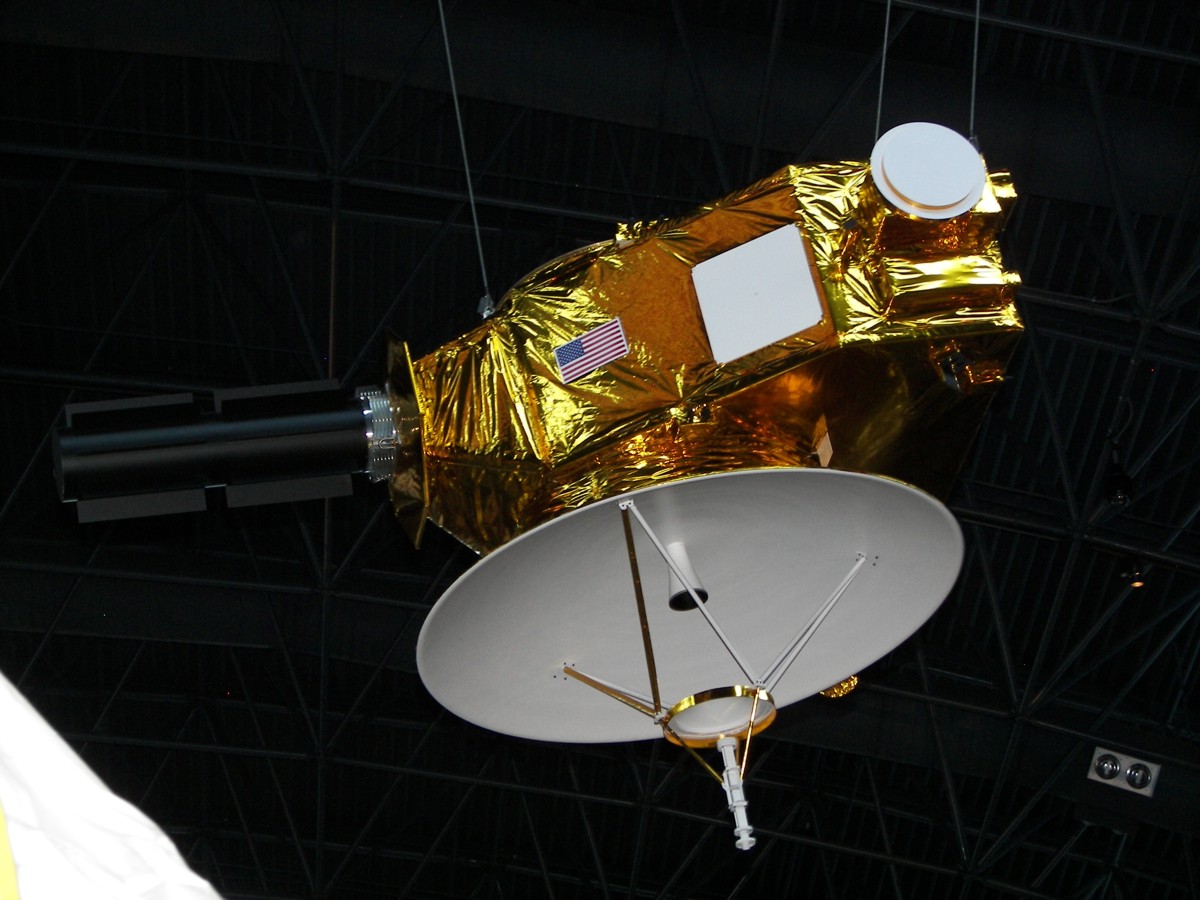 "The answer is always thermal control"

The satellite had black and white longitudinal sections painted on its surface for thermal control.

This was the first French satellite, launched in 1965. It's painted with stripes as a form of temperature control - the black absorbs heat, the white reflects.

27
Why are RTGs different colors?
25
Is there a satellite that tracks other satellites?
16
This BBC photo does not show a replica of Vanguard-1, what might it be?
8
What are these very large, square panels on Inmarsat 5?
7
How does the thin gold film in the glass of spacesuit helmets block thermal IR but transmit visible? What's the property?
8
What is the function of this array of what looks like mirrors on TESS?
11
What ever happened to SpinSat - did it work?
4
What would be a "big picture" understanding of how the orbits of Earth satellites are monitored?
7
Are black and white stripes any better than uniform gray for thermal control?
2
Why were early satellites produced with polished "mirror-like" surfaces?
See more linked questions

16
Sputnik: What took so long?
2
Where can I find the TLE of ExseedSat 1, India's first ever private LEO satellite?
7
Are black and white stripes any better than uniform gray for thermal control?
4
How a spy satellite eavesdrop on another satellite?
0
First satellite dispenser?
7
What was the first Soviet spacecraft that could recharge its battery it each orbit? Where were the photovoltaic cells made?
2
What was the first successful two-stage-to-orbit launch by the US? What was the first attempt if different?