Many shuttle launch engineering videos show an apparent time reference to the right of the frame as red numbers counting up rapidly. For example, from the amazing video "Ascent". 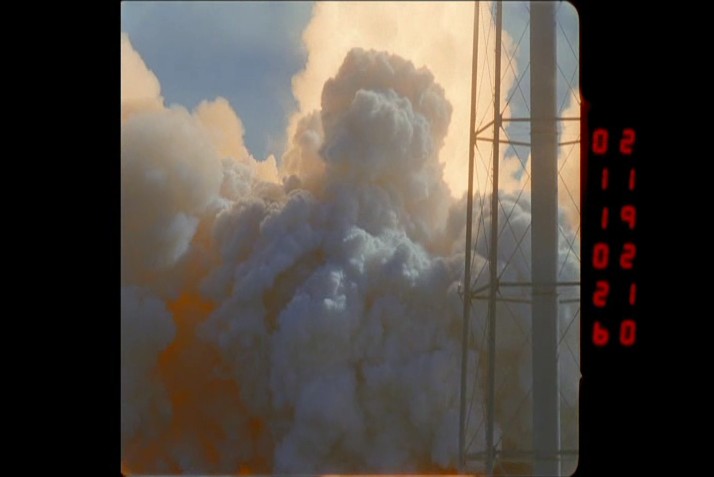 Assuming this is indeed a time reference, what is it relative to? Basically I'm asking for an explanation of this stack of red numbers, what is each row, how does it relate to mission elapsed time or GMT, etc.

@JCRM figured it out.

The time code that you’ll see in the LED display on the right hand side is actually positioned between the two sprockets on the 16 mm frame, and the time code is UTC time code, it’s in IRIG-B format, and you’ll see it’s 21 hours, being UTC it’s 5:02 PM local time, 2 minutes, 11 seconds, and the three digits that are moving in the upper right corner would be representing one thousandth of a second.

The solid number 1, the second digit from the top, is indicating the synchronization of the camera.

The narration also mentions early on that the film starts at about 6 seconds before launch, and one can see that recording starts at 21:02:10 UTC and at about 21:02:16 the shuttle starts moving upward.

In the later shots, the last two digits of the camera number are displayed in the sixth row, e.g. camera 57 and camera 225 are 57 and 25. For some reason the camera number is blocked off in the first view only.

The camera number is on the lower right hand display of the LED timecode, and in this case it's camera number 62. So the 35 mm format also allows us to put a camera designator number, fairly often used, just to help with viewing purposes and tracking purposes.

They mention something about the number of sprockets (2 versus 4). For the 35 mm film the LED display is half the size of the full frame compared to 16 mm, so maybe they use the same LED+optics for both, and the camera number doesn't fit well on the 16 mm system.

It also says after that:

The cameras are all triggered off of the POC or Photo-Optical Control System, which triggers all of the cameras on the pad perimeter, on the fixed service structure, as well as the MLP. It's quite a sophisticated system to synchronize and trigger all of the cameras based on the launch clock.

Now one of the interesting things about this particular 35 mm format is… earlier we mentioned about the time code, the IRIG time code is burned in with an LED display, and on the 35 mm format it’s actually part of the image area, because the 35 mm format has four sprockets per frame, so there’s no way to position the LED in between sprockets like we can on the 16 mm.

So that must be camera 60 or x60 in the image shown in the question, though it isn't specifically mentioned.

Here is a map of the pad cameras, taken from this NASA fact sheet on launch imagery. The red numbers omit the "E" shown on the map. 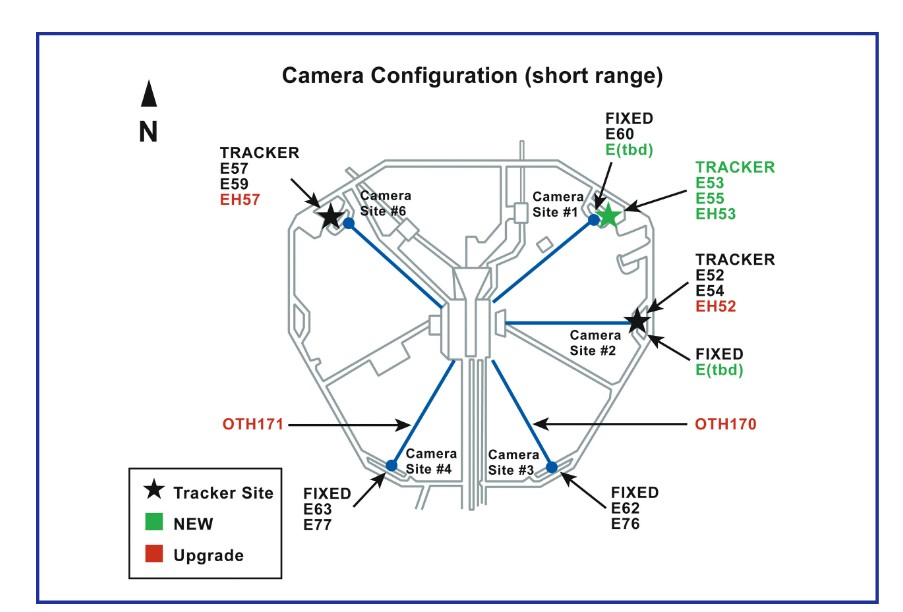 Many of the cameras shown in the "Ascent" video linked in the question are shown on this map.

Not the answer you're looking for? Browse other questions tagged space-shuttle time or ask your own question.

12
Features seen on the Space Shuttle's solid booster; what does "LOADED" mean exactly?

10
Is the document "Space Shuttle Baseline Reference Missions" available anywhere?
12
What is the problem with aborting a Space Shuttle launch?
8
Who built the sparklers used by the Shuttle program during launch?
7
What are the sparks flying at the bottom of SSMEs at the time of launch?
4
How were hypergolic propellants delivered to the Shuttle launch pad?
0
What was the quickest launch-to-complex-milestone time achieved by a shuttle mission?
2
Where can I find launch trajectory data of the space shuttle?
5
Seeing the ground from the shuttle before launch?
16
Why was the Space Shuttle Orbiter's in-orbit time limited?
5
Time gap between leaving the Earth's atmosphere and initiation of orbital motion by space shuttle