Do you need to burn fuel between gravity assists?

If you are planning a mission to an outer planet with multiple gravity assists included, do you need to do some burns for corrections, between the slingshots, or the ideal trajectory is already inserted and you have to only burn some fuel at the destination?

Yes, Trajectory Correction Maneuvers (TCMs) are always performed during cruise phases, whether before or after gravity assist flybys. This NASA tutorial serves as a good general reference.

One source of error resulting in an imperfect trajectory (one that would miss its aimpoint at the next destination, whether the ultimate destination or an intermediate gravity-assist destination) is the imperfect results of launch and/or previous TCMs. There's always some "residual", slight deviations of the actual velocity vector resulting from a maneuver from the intended velocity vector. There are many aspects of a maneuver that can lead to those imperfections: burning the engine a bit too long, or not long enough; engine performance is not exactly what was modeled before the burn; spacecraft pointing is not perfect; if timing the burn by accelerometers, the accelerometer data aren't perfect; etc. At JPL we used a rule of thumb to estimate the size of residuals expected after a maneuver that didn't use accelerometers: about 1% of the delta-V.

The impact of such errors usually grows with time: the longer after the TCM, the farther the spacecraft strays from the intended trajectory. When those errors grow to a threshold level another TCM is called for. Usually even before launch a project will schedule TCMs at several points along a trajectory; if the trajectory turns out to be sufficiently accurate when a scheduled TCM approaches, that TCM is cancelled.

There is yet another potential source of error, especially during the gravity assist flybys: imperfect knowledge of the assisting body's gravity field. Real solar system bodies are never the perfect spheres used in introductory orbital mechanics. They rotate, so they are oblate, the solid bodies have topographical features and mass concentrations or deficits, the giant planets have deep zonal winds that redistribute mass — lots of things can contribute to gravity fields that are rather complex and impossible to measure and characterize exactly. Given such imperfect knowledge of the gravity field, even if the spacecraft hits its inbound aimpoint perfectly, it will miss its outbound aimpoint (probably just a little), which will require a post-flyby TCM or two.

As mentioned above, you need a TCM because your launch vehicle is not perfect. Also, sometimes it makes sense to do a much larger burn, sometimes called a deterministic burn or a deep-space maneuver. For example, on December 3, 1998, Cassini performed a deep space maneuver in between it's two Venus flybys https://solarsystem.nasa.gov/news/12186/trajectory-adjustment-prepares-cassini-for-second-venus-flyby/ . This maneuver was about 450m/s and took 90min on the main engine. This compares to a little over 600m/s for Saturn orbit insertion.

This is done to change the geometry of the second Venus encounter, to make that flyby more efficient. Before launch, it might have been possible to design an orbit which wouldn't need a deep space maneuver, but it would have taken longer and might have required more flybys. Once Cassini launched, it was committed. If it did not make the maneuver, it would have missed the second Venus flyby and never made it to Saturn.

Also, Voyager 2 did a TCM starting less than an hour after it's periapse at Jupiter. You can design a flyby from Earth past Jupiter to Saturn without any TCMs, but once you decide on the launch date and Saturn arrival date, this no-TCM trajectory is locked into a particular Jupiter arrival date. By planning for a maneuver at Jupiter, you can change the trajectory there more than you would naturally, and gain a bit of freedom on your Jupiter encounter. Since all the Galilean satellites orbit in two weeks or less, if you can open up your Jupiter passage window by plus or minus a week, you can arrive with the satellites in any configuration you want.

By doing the maneuver near periapse, you can take maximum advantage of the Oberth effect to magnify the effective delta-v. It was so important that the maneuver happen close to Jupiter, that they planned the maneuver right in the middle of the Io volcano watch, while it was taking pictures. The spacecraft was able to do both at the same time, and stay in contact with Earth, and not shake the camera too much during the burn.

TCMs are performed after a flyby very often, but not always (Tom's detailed answer mentions this in passing). Without a flyby, TCMs are more likely to be skipped. Examples:

If you are planning a mission to an outer planet with multiple gravity assists included, do you need to do some burns for corrections, between the slingshots, or the ideal trajectory is already inserted and you have to only burn some fuel at the destination?

"Want to", possibly; preferably not.

It's expensive to carry fuel into space. Avoiding carrying and using fuel is important, electricity can be created (where there is light, or other source of energy; such as gravity) but creating fuel hasn't been perfected.

The Interplanetary Transport Network is a series of paths for which there is a solution to the three-body problem. Micheal Minovitch provided a solution in 1962 whereby one could increase the speed of spacecraft without using fuel.

It was due to detection of some ring material, by stellar occultations, that a course correction was necessary during Voyager 2's journey to Neptune. During an earlier test of gravity assist the Pioneer 10 mission fuel was planned for and used for course correction.

Simplified explanation of the three-body problem: "This is the Only Way to Solve the Three-Body Problem".

"Minovitch was the first to show how to design a trajectory to a target planet in such a way that a gravity assist could be obtained from that planet to go on to another planet. Such a boost could be obtained from the second planet to go on to a third planet, etc. The only energy required would be the launch from Earth to the first planet. All subsequent planets were "free." As an added bonus, due to the gains in speed, the one-way trip times to each of the planets beyond the first were significantly reduced.

In 1964, Maxwell Hunter publicized Minovitch's gravity-assist concept in an outer planets mission design paper. The next year, Gary Flandro (then at JPL, presently founder and president of Wasatch Research, Inc.) designed a set of Grand Tour trajectories using the gravity-assist concept, including an example of an Earth-Jupiter-Saturn-Uranus-Neptune mission. He pointed out that these planets align themselves for this mission only once every approximately 176 years. The next set of Earth-launch opportunities would occur in 1976, 1977, and 1978. This provided the impetus for what ultimately became the Voyager Project, including Voyager 2's Grand Tour of the outer planets.". 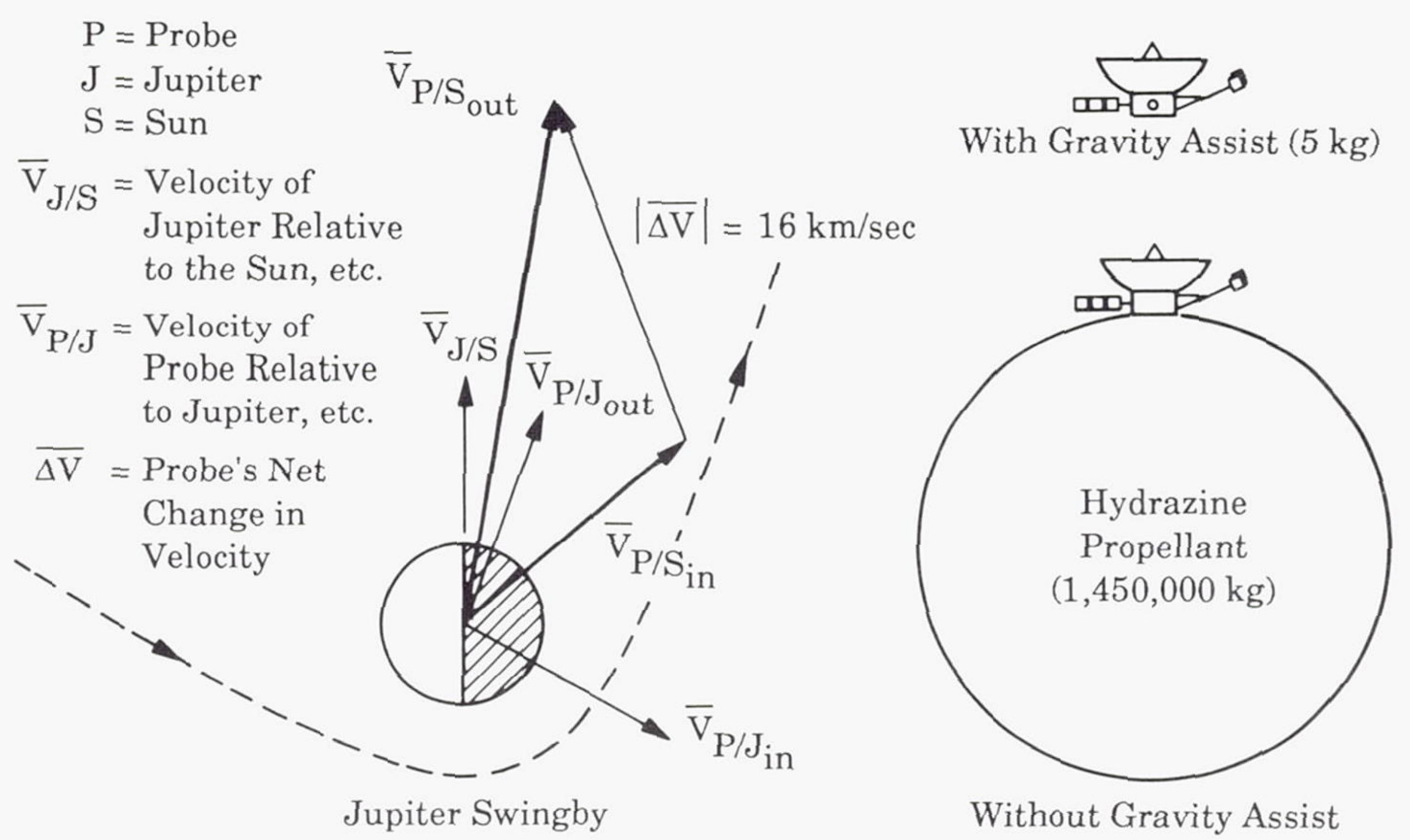 Figure 7-2. Passing close by a massive body causes a spacecraft's path to be bent, and energy to be exchanged between the spacecraft and body. In the Voyager-l Jupiter swingby shown, there is no net speed gain relative to Jupiter; however, Voyager 1 gained 16km/sec (35,700 mph) relative to the Sun, and Jupiter lost 1 foot per trillion years relative to the Sun, causing its orbital period to shrink by nearly one nanosecond.

See: "A survey of ballistic transfers to the lunar surface" (Feb 13 2011), about the use of invariant manifolds for transfers. This diagram on page 11 shows that one can aim for one of many particular trajectories and obtain a successful result, sometimes a tiny amount of fuel is needed to perfect the course:

Figure 10. Manifolds of libration orbits at Jacobi constants where the manifolds just begin to reach the surface of the Moon.

11
Good year for start of an interstellar mission, due to gravity-assist
3
Mathematics of Gravity Assists
9
What is the effect of gravity slingshots around Earth on Earth's rotation and orbit time, and is this effect worth considering?
3
Gravitational assists from bodies other than planets
4
Is it profitable to save fuel for the Oberth effect during a Jupiter gravity assist?
6
Can we speed up spacecraft to suitable interstellar travel speed using oscillating gravity assists on planets on opposite sides of the solar system?
4
What are the limiting factors for interplanetary mission trajectories?
2
Is it more efficient to burn all needed fuel in an Oberth manoeuvre at once or burn a fraction of the fuel for each orbit?