What are the operating systems and network stack in the Chandrayaan - 2 vehicles?

I am trying to find the information about the operating systems that are run in all of the Chandrayaan - 2 vehicles, the orbiter, lander and Rover. Are these just firmwares? Or how are different processes controlled? (Talking from the systems software side)

Also, it seemed that there was a communication problem. As far as I gather from the internet and some papers published, the connection from the Rover is made through Indian Deep Space Network (IDSN). It is done by the Rover connecting to the Lander and then Lander connecting to the Orbiter, and finally to India. But there is very little information about the software side of the network communication. How does the network stack look like?

For the embedded software, likely Ada

An ISRO scientist working out of the Atmospheric and Oceanic Sciences group gave some insight that his part of ISRO mostly works with FORTRAN, MATLAB and Python - but that ISRO doesn't really have a standard language for its projects. It's a big agency with a lot of facilities involved in many different projects.

Separately a ISRO software engineer during a Reddit AMA gave some more insight into the kind of systems they work with (though probably for classification reasons the details are sparse). Unsurprisingly, the satellites are programmed with Ada. I don't think it's a stretch to imagine every other embedded system in this mission was programmed with Ada as well. Ada is a good choice for mission critical systems where failure is expensive or dangerous.

I was able to find out that the landing sequence was autonomous, once it reached close proximity to its intended landing location, and that this algorithm is one of the engineering marvels developed natively for this project.

As for the IDSN,

We know some details at least of the physical layer of this network. The heart of this system is an impressive 32m antenna operating in X and S band, with a 20kW amplifier. An auxiliary German produced 18m antenna compliments it. This is a world class system able to discriminate weak signals even at 400,000k. 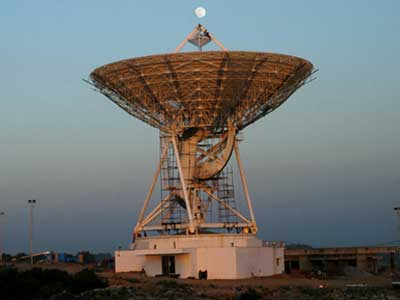 Not the answer you're looking for? Browse other questions tagged deep-space-network isro chandrayaan-spacecraft india or ask your own question.

10
Why did ISRO require additional tracking ships in the South Pacific for its MOM mission?
8
What do the different "Testing" codes mean on NASA's Deep Space Network website?
8
Is it possible for the Deep Space Network to use MSPA and antenna arraying simultaneously?
4
What is happening to the rocket in this ISRO photo - what are these huge platforms?
0
What are the main sources of radio noise & interference limiting deep space data rates and availability?
1
If a MarCO-type CubeSat were in orbit around Bennu, what kind of power would it need to communicate with the Deep Space Network?
1
Chandrayaan-2 orbiter and lander communications with Earth (IDSN)
9
Why would thermal imaging be used to locate the Chandrayaan-2 lander?
9
What went wrong in the Chandrayaan-2 mission with the Vikram lander?
22
How hard is it to receive direct signals from vehicles on the surface of Mars, and has anyone other than the DSN done so?