What is the formula to calculate thrust needed to launch from the Moon to Mars?

What is the formula to calculate thrust needed to launch from the Moon to Mars?

I think this is a reasonable question and it shouldn't be so down-voted.

Here's how to calculate roughly how much thrust you need to launch from the Moon and reach Mars' orbit. Landing safely on Mars once you approach it is a separate and difficult challenge because of the atmosphere.

To escape the Moon's gravity you'll first need escape velocity of about 2400 km/s. You can calculate that from

where $G$ is the gravitational constant and $M_M$ is the mass of the Moon. You can find a table of the product $GM$ for the Moon and many other bodies, called the standard gravitational parameter. Note that the units there are meters, not kilometers.

You can calculate those using the vis-viva equation.

where $r$ is the radius from the orbiting body at the moment, and $a$ is the semimajor axis of the orbit. Lets call those orbits circular, so we can set $r=a$ and for circular orbits only write the simlified

Remember to make sure all of your units are meters and seconds! It's really easy to accidentally use some numbers in km and mess up the calculation.

Let's assume you are far enough from Earth that you can ignore the additional bump you'll need to completely escape Earth's pull, being so far away from it already.

We can flip the vis-viva equation around to get:

That turns out to be 160 million km. You are currently at your perihelion of 150 million km, which means that your farthest distance from the Sun (on the other side) will be 170 million km. But Mars' closest approach is out at about 208 million kilometers, so you'll need another bump in velocity.

However, there's a better way. As pointed out in this answer to * Why is Wikipedia's delta-v from the Moon to Mars transfer so much lower than mine?* you can do it for less delta-v by using the Oberth effect. Instead of launching from the Moon directly into a transfer orbit, you should launch towards the Earth. Not directly at it, but in a hyperbolic orbit that swings past it. When you are at a very low altitude (say 200 km) you can do a 600 m/s burn instead of the 1,400 m/s burn away from the Earth.

That will put you in line with the numbers shown in the second plot below. 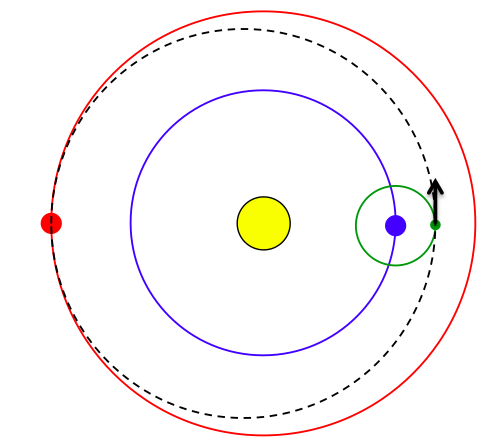 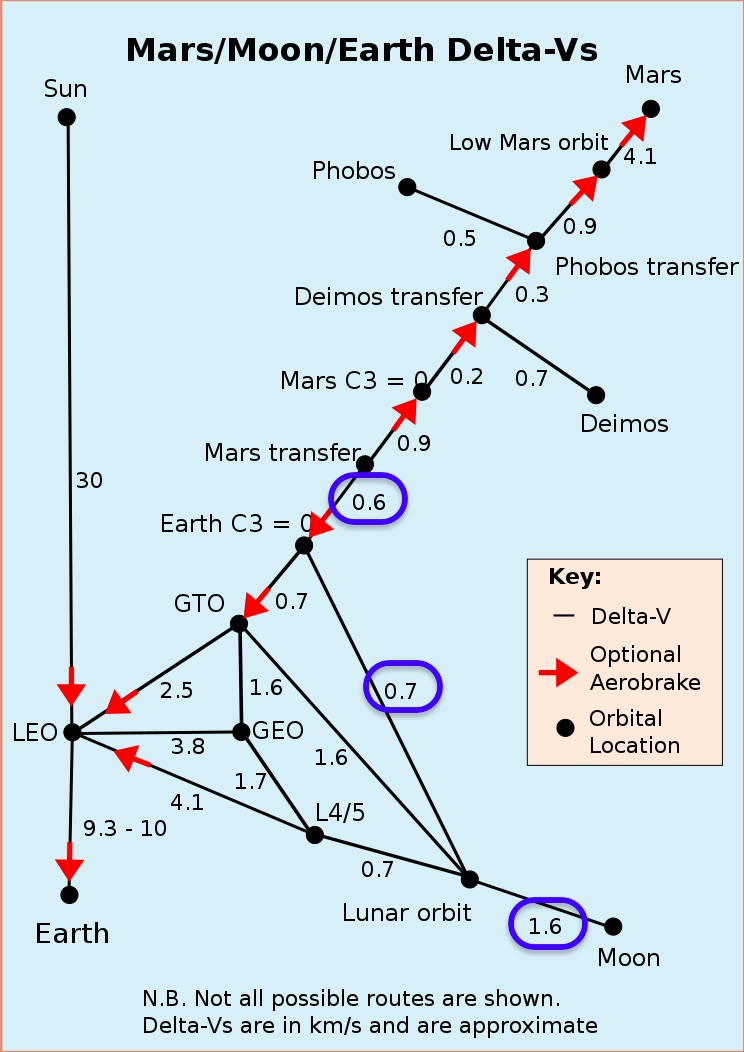 3
Why is Wikipedia's delta-v from the Moon to Mars transfer so much lower than mine?