What is and what isn't ullage in rocket science?

This comment and others below this answer address ullage.

Question: But I still don't completely understand what is or isn't ullage in rocket science context. Is it only a noun, or does it have a form as a verb? In this context does ullage always refer to a force that pushes liquid fuel to the end of a tank where the outlet exists? Can gas pressure in a tank also containing liquid propellant provide ullage, or is ullage restricted to an acceleration (e.g. from the use of an ullage motor just prior to engine ignition) or a diaphragm or gas bag?

What got me started on this is the image below from the Astronautix page OTRAG. The gas volume is labeled ullage. I assumed that the gas pused on a sliding bulkhead in order to push the fuel against the outlet, thinking that that's what ullage motors do. But the bulkheads are fixed and perforated according to this answer which links to OTRAG – A Low Cost Rocket (U2, September 2014) (September 2014_u1, Joachim J. Kehr, Editor SpaceOps News) so the label only refers to the gas volume. 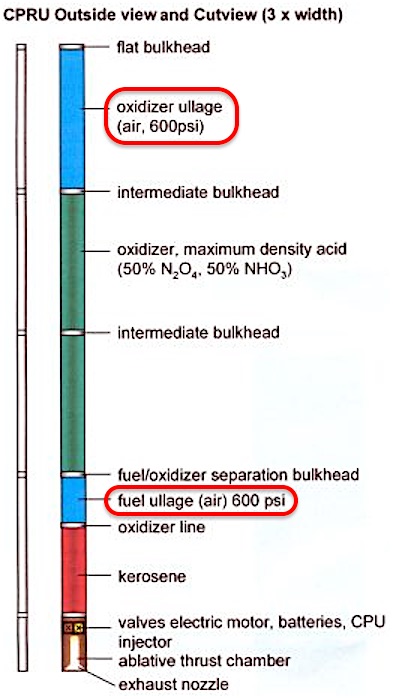 But I still don't completely understand what is or isn't ullage in rocket science context.

Ullage technically is the space in a tank of liquid which is gas-filled instead of liquid-filled.

For a propellant tank, it's important that the ullage volume be kept away from the inlet that leads to the engines, because you want the liquid going into the engines. Propellant turbopumps will surge and likely fail if they ingest large amounts of gas while running; if the gas is inert, pressure-fed engines will lose their stable combustion.

Is it only a noun, or does it have a form as a verb?

Formally it's a noun; as with all jargon, people will in practice reduce complex issues and concepts to a single word without really being conscious of it. Like so: "The Apollo CSM sometimes needs to perform a burn with the RCS thrusters before igniting the main engine, so that it can be ensured that the ullage is at the forward end of the propellant tanks and the propellant feeds correctly" becomes "Apollo does an ullage burn [i.e. a burn which is significant to the ullage issue] before ignition".

In the Apollo transcripts, when mission control reads up a "pad", or set of instructions for a maneuver to be done at a set time, they specify the ullage details like this one from Apollo 11:

But again, ultimately, "ullage" is used here as shorthand: "the pre-burn RCS burn that takes care of the ullage problem".

does ullage always refer to a force that pushes liquid fuel to the end of a tank where the outlet exists?

Organic Marble notes that the word for this is "settling". "Settling force" is the force that pushes propellant to the inlet end of the tank. "Settling burn" is the maneuver that applies settling force. "Ullage" sometimes gets sloppily used in that role, but the force is either gravity or rocket thrust, not ullage.

Can gas pressure in a tank also containing liquid propellant provide ullage, or is ullage restricted to an acceleration (e.g. from the use of an ullage motor just prior to engine ignition) or a diaphragm or gas bag?

Gas pressure by itself doesn't address the keeping-gas-out-of-the-inlet issue, but a volume of pressurized gas in a tank in microgravity is, technically, ullage. The ullage is moving around in the tank in an uncontrolled way, which is problematic.

The diaphragm/balloon solution to the ullage problem (which is typically found with tankage for small thrusters like the Apollo RCS thrusters) is a terminological edge case. Is it ullage or is it not? It's ullage if you consider both sides of the diaphragm, I suppose, but if you consider the two sides of the diaphragm as separate tanks, then one is a gas tank with no liquid, and the other is a liquid tank with no gas, so there's no ullage in sight.

Regarding sloppy jargon, you may note that in the beer sales business, ullage winds up with the exact opposite meaning -- it's the residual beer in a container after you've emptied it as much as you can, that's going to go to waste rather than being sold. That is, "ullage" means the beer underneath all the ullage!

Not the answer you're looking for? Browse other questions tagged terminology ullage or ask your own question.

8
Why can't we use the same tank to hold fuel for both the RCS Thrusters and the Main engine for a deep-space mission?
6
How (the heck) will SpaceX's Starship's future pressure-fed thrusters work at "any gee’s, any attitude"?
3
Are these sliding ullage bulkheads in the OTRAG rocket? How do they seal?

8
Why did the ullage motors for the S-IVB TLI burn shut down prior to S-IVB ignition?
9
Why did the S-IV-B refer to "jettison"ing its ullage?
1
What is SpaceX's "rocket canister"?
0
What is the distinction between detaching, jettisoning, and dumping?
3
Are these sliding ullage bulkheads in the OTRAG rocket? How do they seal?
9
Why do Soviet and Soviet-derived rockets hot-stage instead of using ullage motors?
0
Ullage control on stage shutdown?
3
Ullage control with single engine stage?