Are space camera sensors usually round, or square?

A series of round lenses produces a round image on some sort of sensor or sensor array.

When it comes to cameras and telescopes out in space, are the sensors also round?

It seems like most of the images I've seen from space telescopes and cameras are rectangular, but I'm not sure if that's cropping in post-processing or something more raw.

General answers are fine as well as specific well-known examples (like HST, to pick one at random.)

The Kepler space telescope uses a bank of 21 rectangular CCD modules - each with two 2200x1024 pixel CCDs). Each module covers 5 square degrees on the sky. 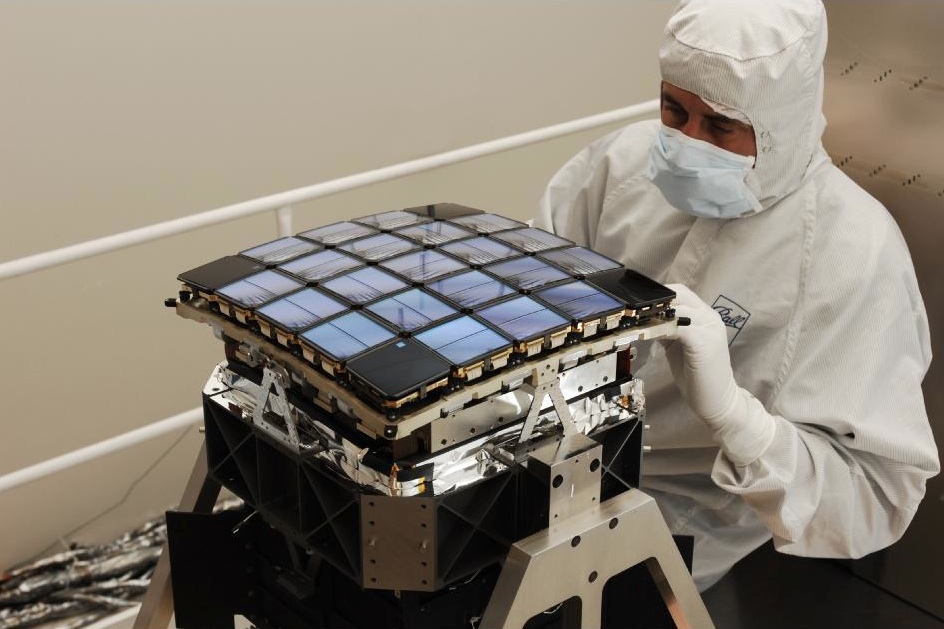 Giving a field of vision of: 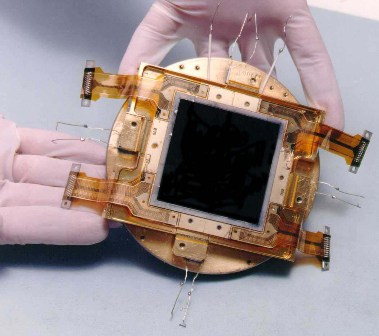 This WFC3 (Wide Field Camera 3) forms just a small portion of Hubble's field of view from its full instrumentation coverage. 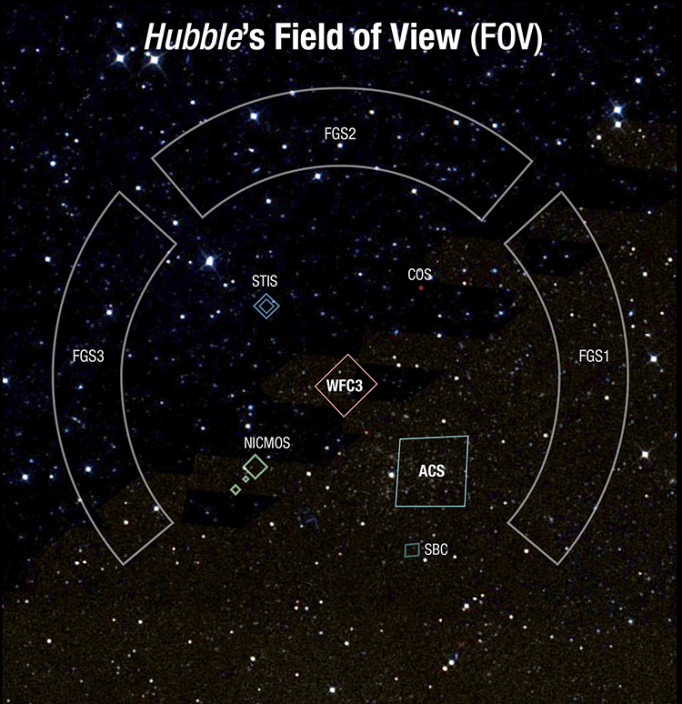 This illustration shows the “footprints” of all the instruments in Hubble’s field of view. These include:

WFC3 and ACS are the two instruments involved in the Frontier Fields program.

Silicon wafers are sliced from a giant single crystal of silicon called a boule, which is grown from a seed crystal dipped in and then slowly pulled from molten silicon.

Circuits such as CCDs (and everything else) are patterend on silicon wafers aligned to the crystal axes of the wafers indicated by the wafer flat or notch (1, 2 see alignment flat on bottom, 3 see alignment notch on left)

This can sometimes be important for electrical reasons but it is very important for mechanical reasons because you need to "dice" the thin, delicate wafers into individual die and that is a lot easier to do allong crystal planes than it would be trying to cut out a circle. Crystals like to break when cut off-axis, tiny microscopic cracks propagate along crystal planes especially when the die are cut off-axis.

So if you have a rectilinear silicon die and a rectilinear circuit pattern and rectilinear readout system, there's absolutely no benefit to building a single-die circular sensor. (However, multi-die arrays are a different matter, as nicely illustrated in @Snow's answer!)

If your useful optical field is circular due to optical vignetting or aberration then you can mask your data electronically during processing.

A circle has 21% less area than the square in which is it circumscribed:

so you could speed up data transmission from a spacecraft by 27% if you only sent back the data from an inscribed circular field of a square sensor:

That's a meaningful amount of time savings, considering that some deep-space spacecraft (e.g. New Horizons) can spend months sending back all the image and other data from a flyby photoshoot. However, I think instead that they make the optics good enough to provide good image quality out to the corners and keep the whole square (or rectangular) image data.

As another example: the Gaia mission illustrates that modern CCD production techniques allow to have form follow function: it uses an creatively laid-out array of CCDs to be able to integrate multiple functions in a single instrument:

[T]he three functions are built into a single instrument by using common telescopes and a shared focal plane:

Each function is achieved within a dedicated area on the focal plane. 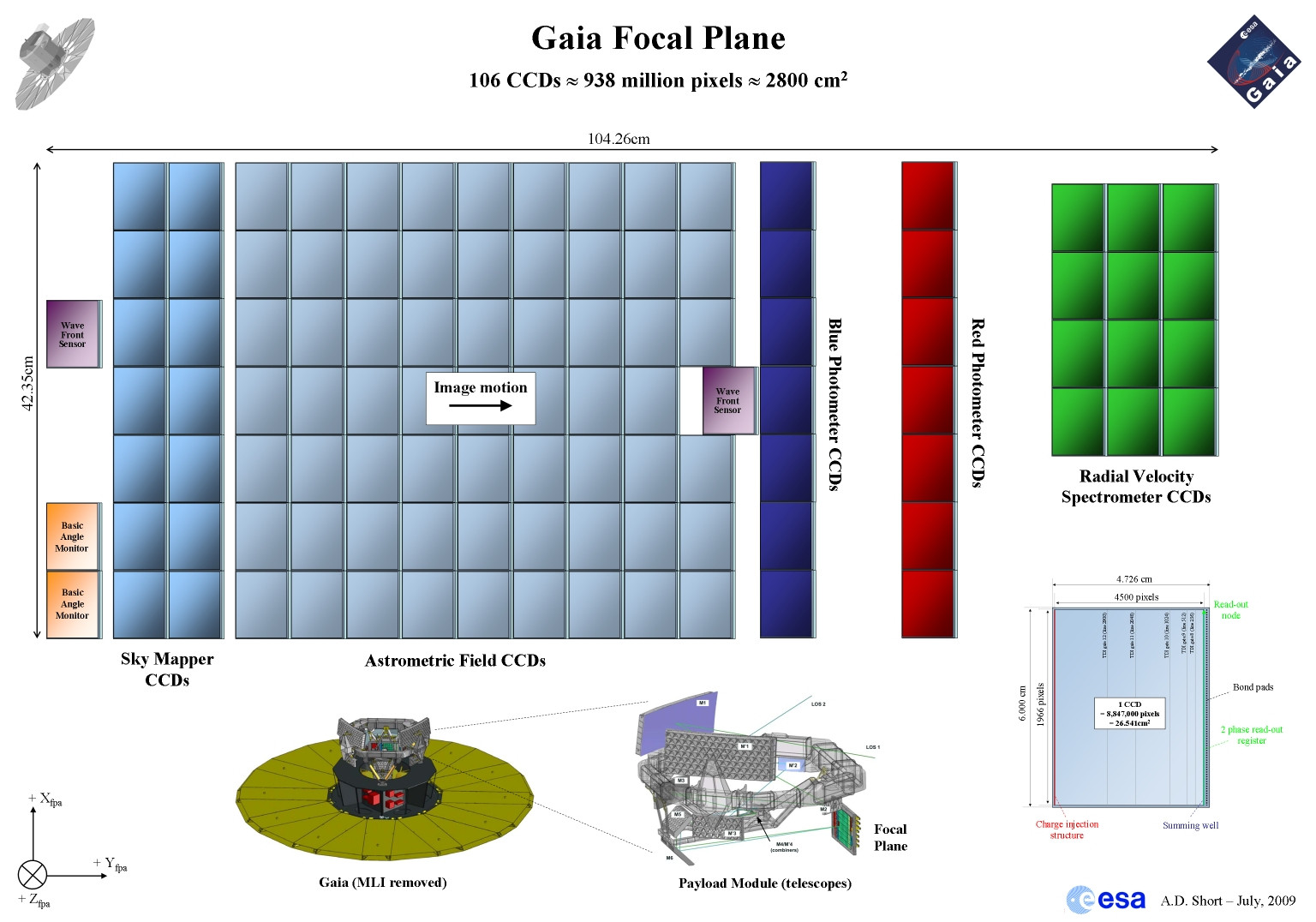 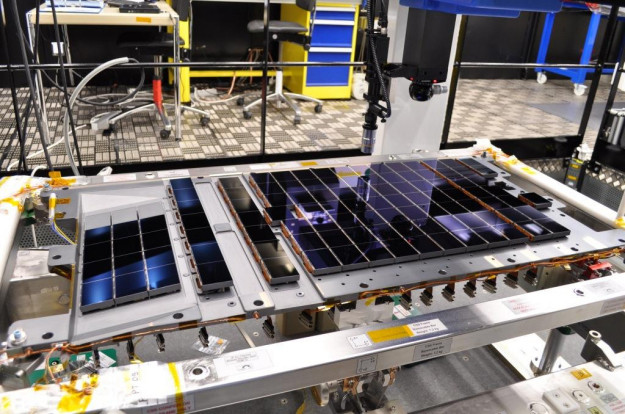 There were a lot of square format cameras.

But there are also camera sensors being neither square nor round. The narrow angle cameras of the Lunar Reconnaissance Orbiter use a line sensor with 1*5064 pixels. The maximum image size is 2.5 x 26 km at an altitude of 50 km. The pixel scale is 0.5 m per pixel, so the 2.5 km wide image is resolved into 5000 pixels. The image length of 26 km is recorded during the orbital move of the camera around the Moon. The resulting image has 5000*52,000 pixels.

Not the answer you're looking for? Browse other questions tagged space-telescope telescope or ask your own question.

8
Folding structures in space - What are the potential benefits and problems?
12
What are the current state in plans to put a liquid telescope on the moon or in space?
41
Why are so many space telescopes placed in LEO instead of at Lagrange Points? And why do we hear about Hubble more than any Langrange-orbit telescope?
2
What causes these cross-shaped artifacts in TESS' first images?