How much of the Shuttle was physically realized in the simulator?

How much of the Shuttle physically existed in the simulator? Was it just the flight deck? Or were the mid-deck, lower equipment bay, and/or payload bay also included?

Note: there were a lot of training simulators. This answer concentrates on the Shuttle Mission Simulators. There were mockup type simulators like the Crew Compartment Trainer (CCT) that replicated the crew module interior very well. They weren't computer-driven though - most of the switches did nothing. Here's the CCT set up in a museum. 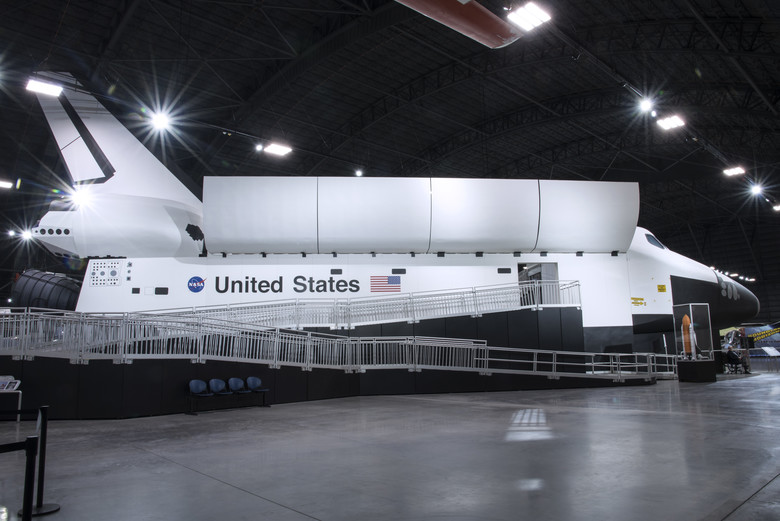 There were two different styles of "bases" or training devices in the two buildings that constituted the Shuttle Mission Simulator facility. Each style provided different parts of the Orbiter crew module for training.

The Motion Base (of which there was only one example) provided only the forward portion of the flight deck in a high-fidelity manner. In other words, everything seen and touched by the pilot and commander was flight-like. There were no aft or aft side panels, although the Display Electronics Unit (DEU) 4 and a keyboard was provided for the use of MS-1. This panel was not flight-like.

External view of the Motion Base 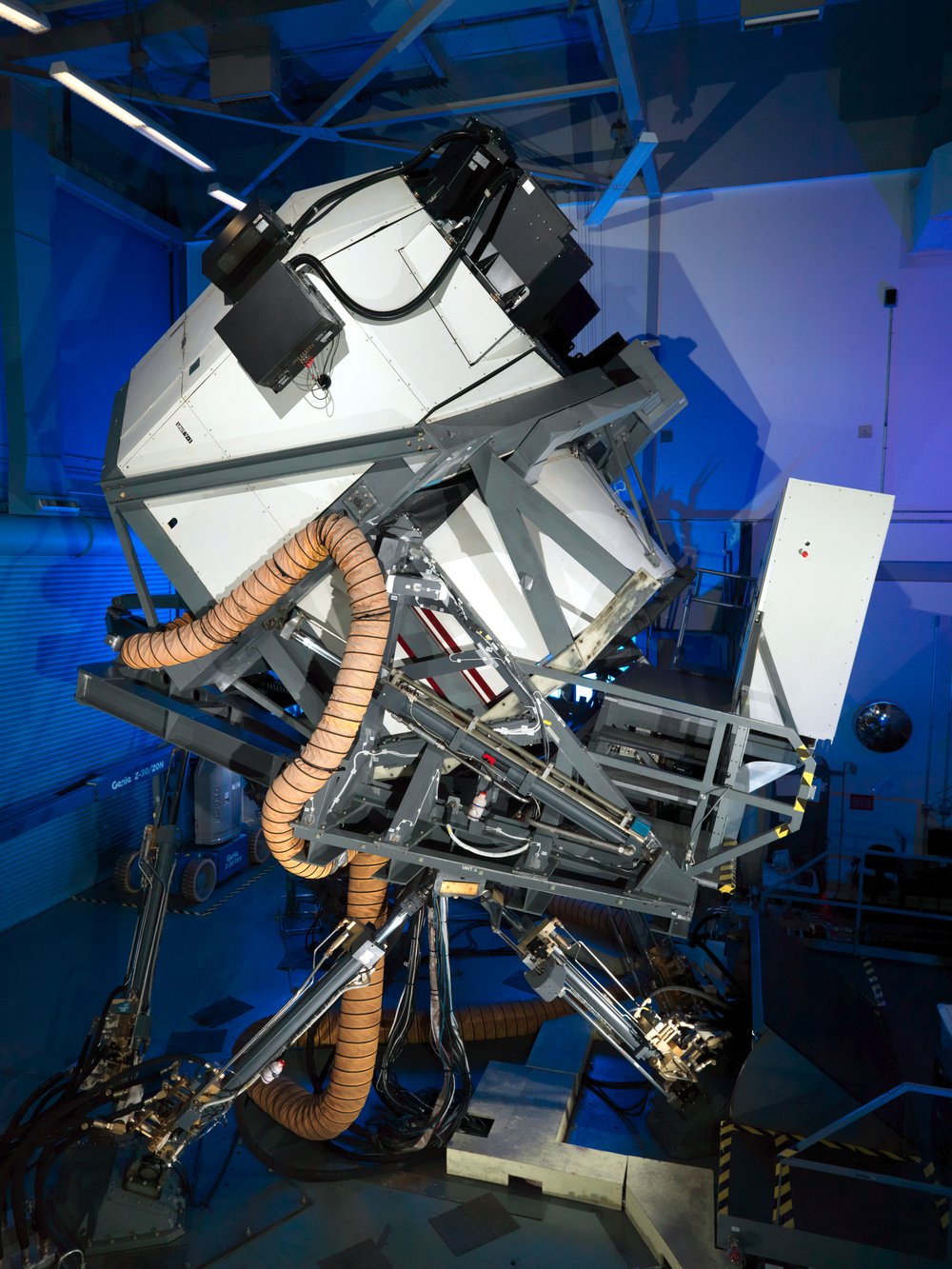 Internal view of the MS-2 and MS-1 seat positions in the Motion Base. You can see how the flight-like interior stops above and slightly behind the pilot and commander's heads. You can also see DEU 4 and its keyboard on the far right wall of the simulator. 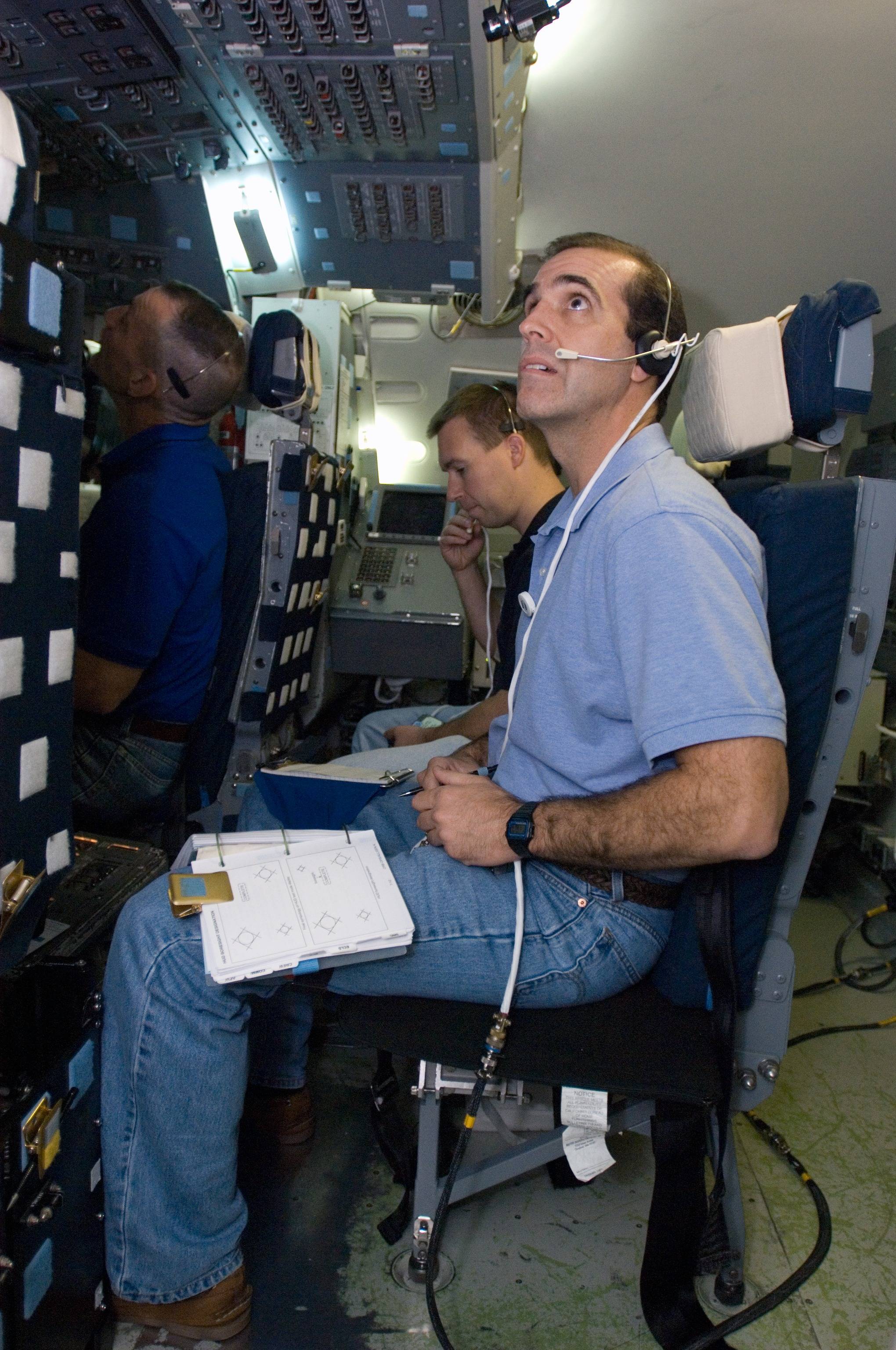 The Fixed Base and GNS simulators provided a complete flight deck interior - forward, side, and aft crew station panels were all provided. They provided a mid-deck which was volumetrically and visually unrealistic but in which were mounted flight-like panels, lockers, and the galley. There was no airlock volume or Lower Equipment Bay volume simulated in these simulators, although airlock control panels were provided.

This is an exterior picture of the GNS (the Fixed Base was similar). 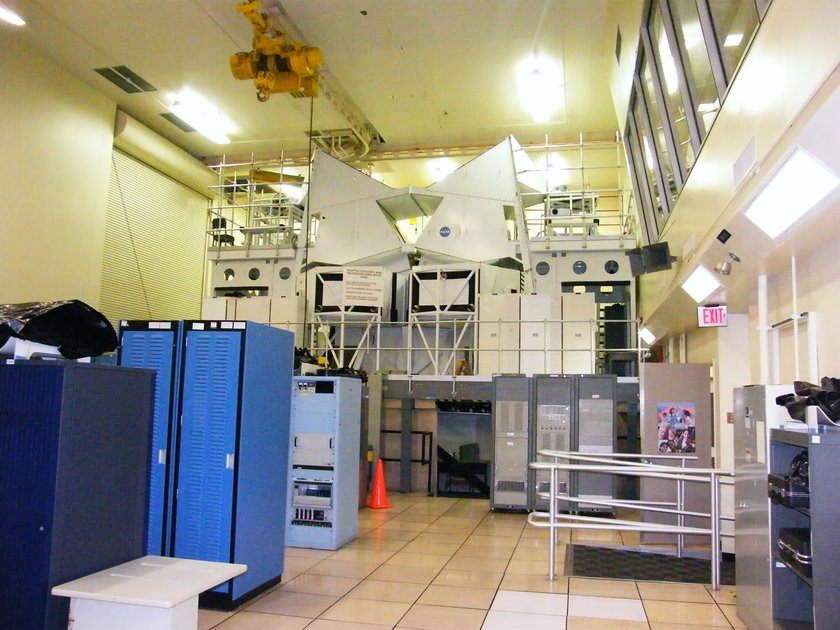 This picture shows how in these "bases" the flight-like interior continued past the pilot and commander seats. The left side wall is shown. 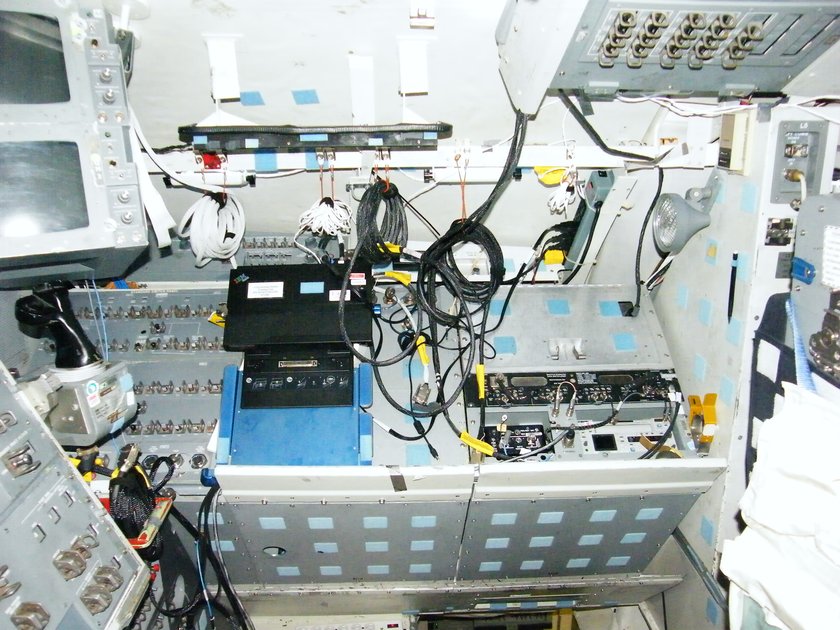 This picture shows some of the mid-deck panels with the unrealistic walls. 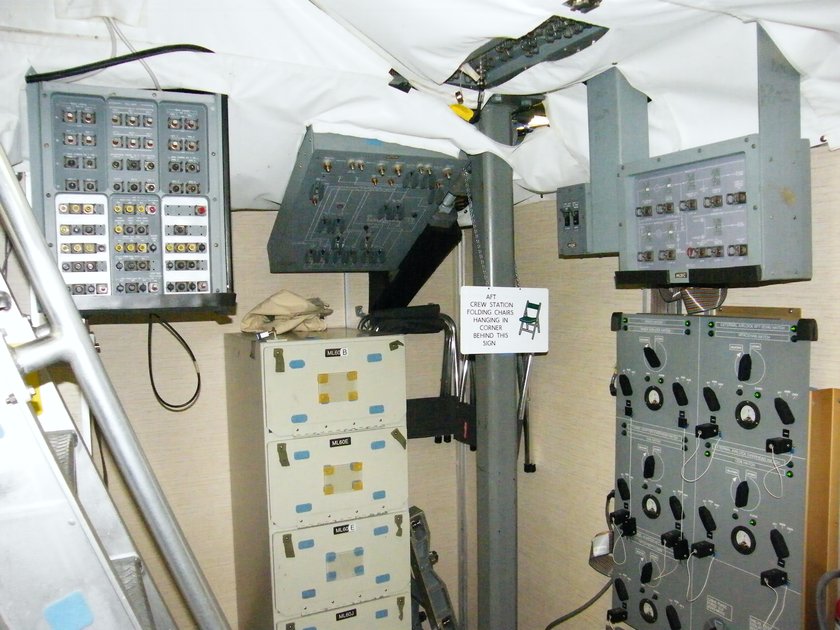 Before the GNS was retrofitted into a fully capable simulator, the Motion Base was provided with an aft crew station - but it was located in another room, and the Motion Base had to be locked in position, and an access bridge lowered.

There was a Waste Collection System (space toilet) simulation/training room in the facility, but it was not directly connected to any of the simulators. It was located between the Motion and Fixed Bases.

The payload bay was simulated only - you could see it out of the simulated aft windows, and interact with objects in the view. 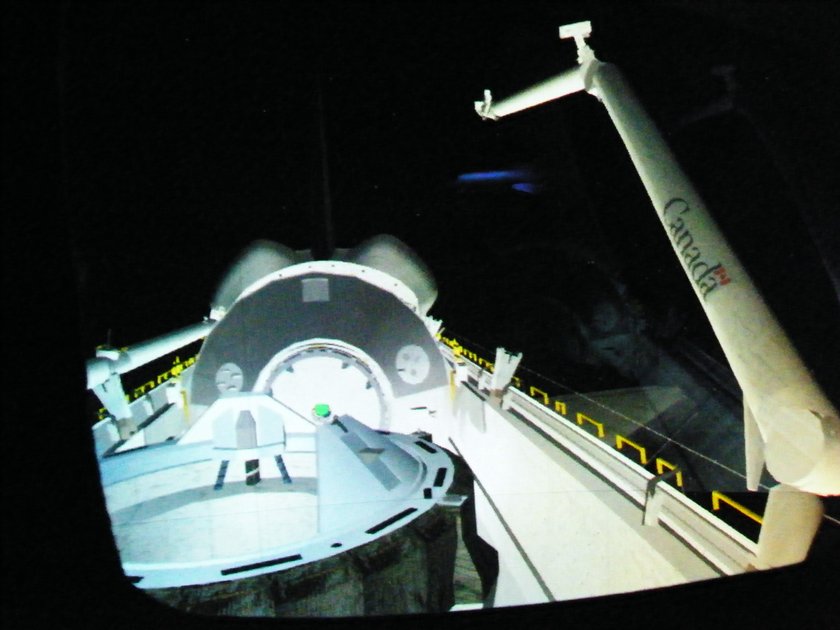 Reference: I worked there

One of the Space Shuttle simulators flew

The Shuttle Training Aircraft was a Grumman Gulfstream II that was heavily modified so that pilots could train to land the shuttle in an aircraft that had similar flight characteristics to the real shuttle (when landing). It extended the gear and ran the engines with the thrust reversers engaged so that it could approach as steeply as the real shuttle did without overspeeding, and it was modified to withstand the high aerodynamic stresses involved. 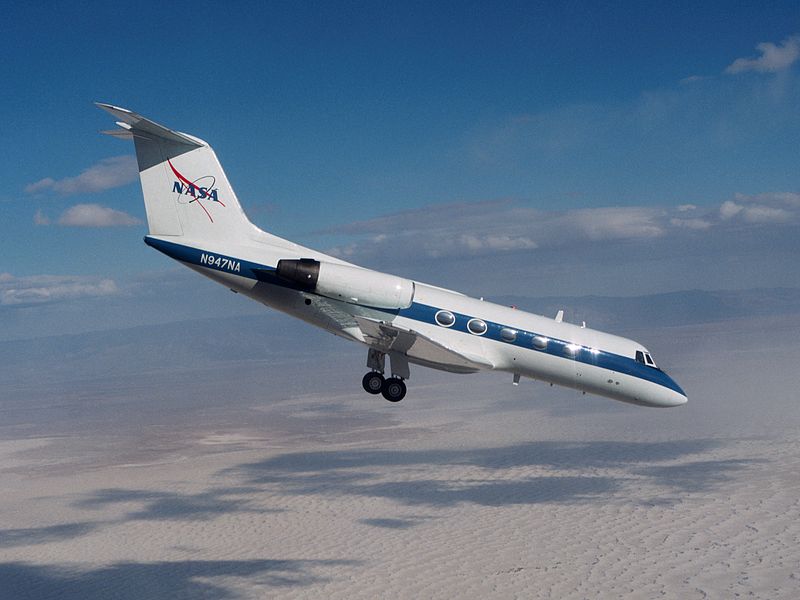 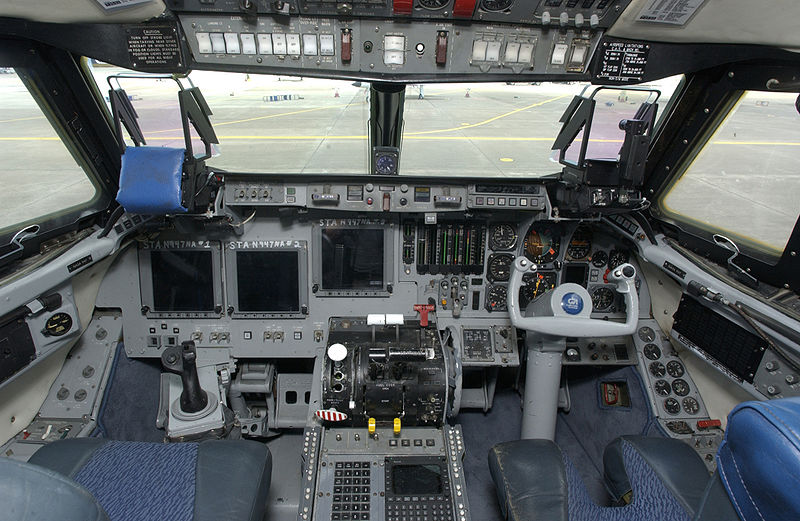 Special software controlled the jet to make it fly like the Shuttle. From Modified Jet Stands in for Landing Orbiter (NASA):

The wing and engine modifications are the tools that a set of computers inside the aircraft use to make the shuttle pilots feel like they are flying an unpowered spacecraft. That means the pilots are in charge, but the computers are in control.

When the astronaut pulls the control stick back, for example, the computer decides how a real orbiter would react. Then the computer moves the wing and tail to make the STA act the same way. The movement takes a scant 50 milliseconds to occur, though, so the pilot senses no delay.

"The computer controls the airspeed and the auto-throttle controls the engines," explained Alyson Hickey, a flight simulations engineer aboard the STA.

There's a lot more about this amazing jet in the article.

Not the answer you're looking for? Browse other questions tagged space-shuttle simulation simulator or ask your own question.

4
Was a real Space Shuttle ever used as a really big simulator?
3
Was it possible to simulate another atmosphere during Shuttle training?

15
Why is this astronaut placing a radar reflector?
25
When was it publicly revealed that a KH-11 spy satellite took pictures of the first Shuttle flight?
12
How was the airlock installed on the Space Shuttle mid deck?
4
Was a real Space Shuttle ever used as a really big simulator?
42
Was the payload bay of the Space Shuttle depressurized before launch?
1
How did the Rotating Service Structure achieve environment control?
28
Did the astronauts seated on the space shuttle mid-deck have responsibilities during reentry and landing?
5
Was the Space Shuttle balanced experimentally before flight?
19
How 'space ready' was space shuttle prototype Enterprise?