If a comet-sniffing spacecraft were launched today, could it catch up to newly-discovered ε>3 C/2019 Q4 (Borisov)?

As found in this answer to What makes scientists already so certain that Comet C/2019 Q4 (Borisov) is a comet and not an asteroid? the orbital parameters of this eccentricity > 3 visitor to our solar system can be found in Minor Planet Electronic Circular (MPEC) K19RA6. The amateur telescope that discovered this object (and the amateur comet-discoverer themselves) can be seen in Why is this telescope so short? How hard is it to make such a fast primary?

Suppose in this post-ʻOumuamua age we had had a cometary analysis spacecraft already built and ready to go, so that we could check isotopic abundances from its coma and/or tail to sniff out what another solar system's abundances might† be, and a rocket had been procured and dedicated to a short-notice deep-space launch.

Question: Would any of the likely rocket candidates and upper stage boosters be able to catch up to Comet C/2019 Q4 (Borisov) assuming it were lauched today, based on it's orbital parameters linked above?

A ballpark answer is fine, it's not necessary to calculate the exact trajectory. I have a hunch that the answer is no, or at least not for a hundred years when the spacecraft will be so far away that we can't receive any data from it, but I don't know.

†While ε>3 means that unless something unusually happens it's going to exit the solar system, it doesn't necessarily mean beyond any doubt that it's from outside the solar system.

Screen shot of Scott Manley's video Water Found On Distant 'Super Earth' (or Mini Neptune) AND A New Interstellar Comet! showing an orbitsimulator.com simulation of the comet 13-Sep-2019 using some paramgeters, presumably pretty good ones considering the source. Click for full size or watch the video after about 07:10. 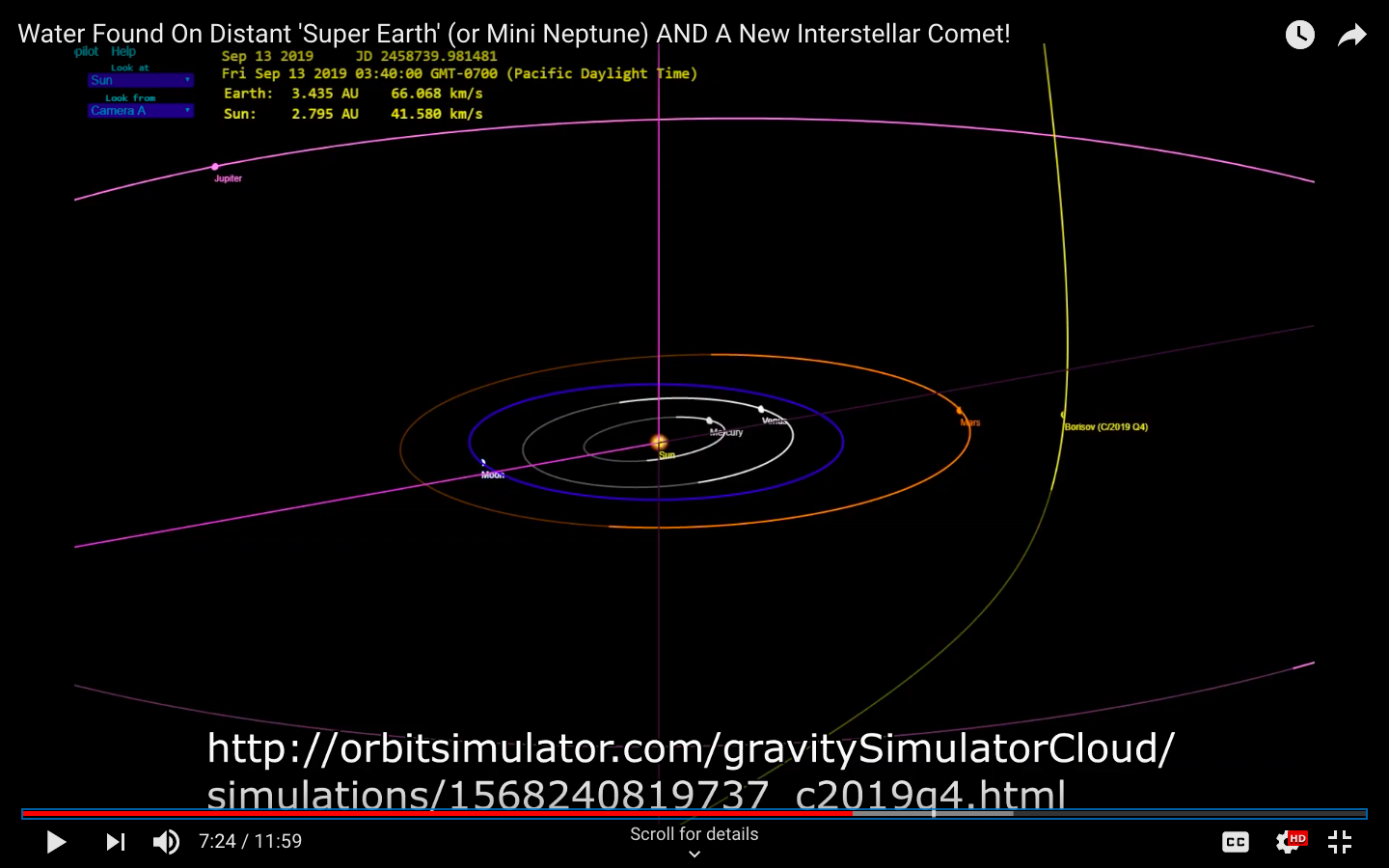 Not a chance. As detailed in Bill Gray's FAQ for C/2019 Q4, the velocity at "infinity" when it leaves the Solar System will be ~32.6 km/s, one of the strongest signs that this was an interstellar object. This is considerably larger than the fastest moving spacecraft, the Voyagers, at 16 km/s. So with current conventional rockets or ion propulsion there is no way to catch up. If the recently selected ESA Comet Interceptor had already been launched and was out at the Earth-Sun L2 point, then it might have been possible for it to do a flyby investigation.

Not the answer you're looking for? Browse other questions tagged launch deep-space launch-vehicle comet or ask your own question.

16
How hard is it to fly through the tail of a comet? Has it been done?
7
Do/could we have a mission ready to go for unexpected extrasolar objects?

9
What is the smallest body that has sufficient gravity for another body to orbit it?
0
How could the gravitational pull of a comet affect spacecraft and astronauts landing on it?
7
What forms of water ice have been observed and verified in the solar system?
3
Comet at Mars L1
4
Is NICER/SEXTANT the first civilian “spacecraft” to determine it's own position in space without GPS or uplinked data?
16
How hard is it to fly through the tail of a comet? Has it been done?
2
Does a fully fuelled Starship in LEO have 0kg payload to Jupiter?