How do fully-suited astronauts enter the Space Shuttle and sit down in 1 g vertical vs horizontal?

This answer has astronauts entering a vertically oriented Space Shuttle for a Terminal Countdown Demonstration Test (TCDT) while this answer has them entering the shuttle when it is oriented horizontally for a Crew Equipment Interface Test (CEIT).

So somehow the shuttle had to be designed to allow people to walk in in both orientations and get to any of the seats and sit down while wearing a space suit and possibly gloves, presumably with some assistance.

Question: How does that work? What are the paths an astronaut takes from entrance to seat in each of the orientation? Where are the footfalls placed in each case?

This picture from the SODB Volume IV (not online but on the to-be-scanned list) is the best one showing the relationship of the side hatch, ladder, and access hole that I know of. 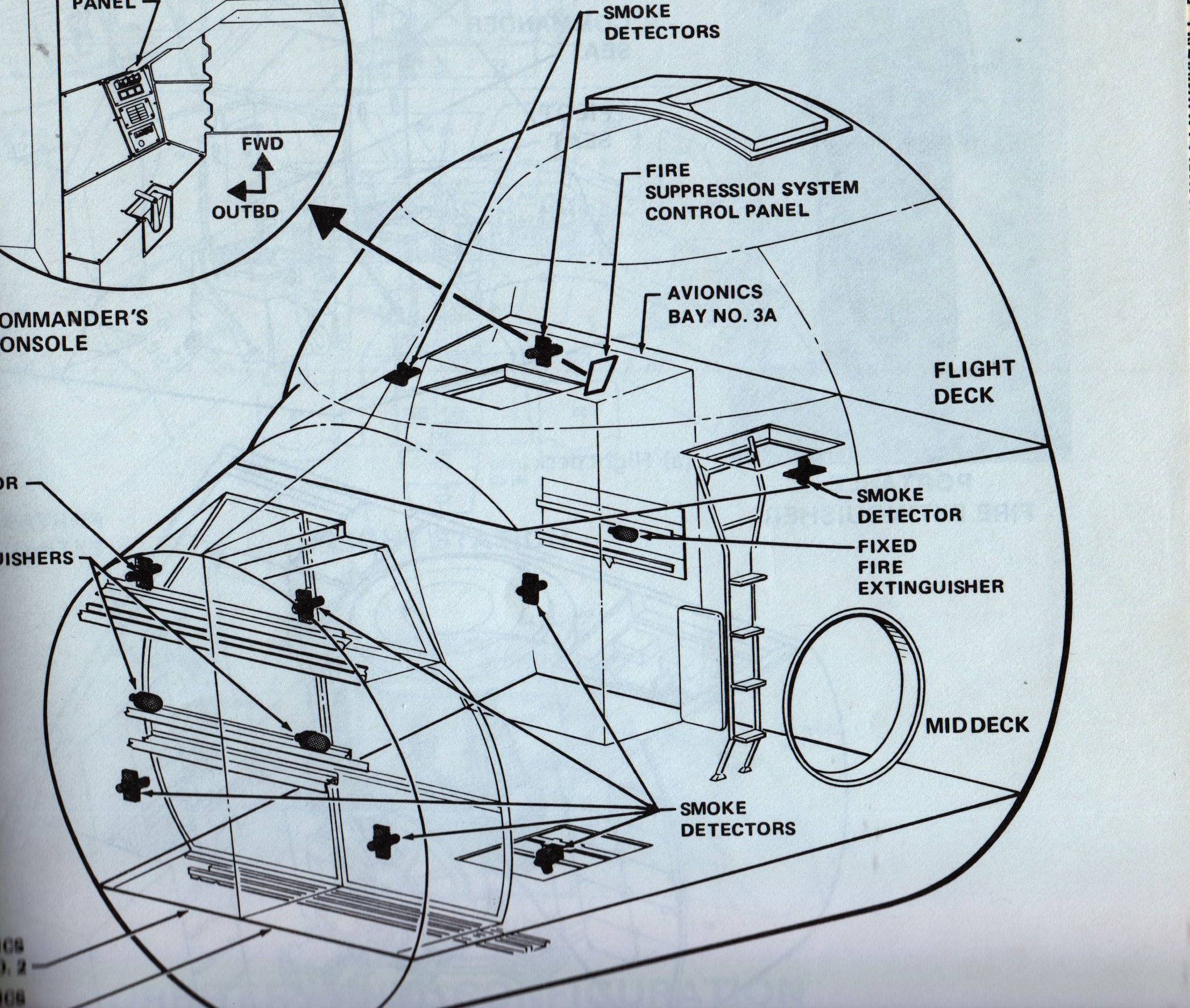 Vertical - the crew enters via the side hatch from the White Room. They are assisted by cape crusaders during this activity. When they enter, they are standing on a platform placed over the door of the toilet compartment. They then clamber through the interdeck access hole and climb up the flight deck floor using loops affixed to the floor and the mission specialist seats as hand and foot holds. The order of ingress is the same.

Imagine this picture tilted 90 degrees to the right. 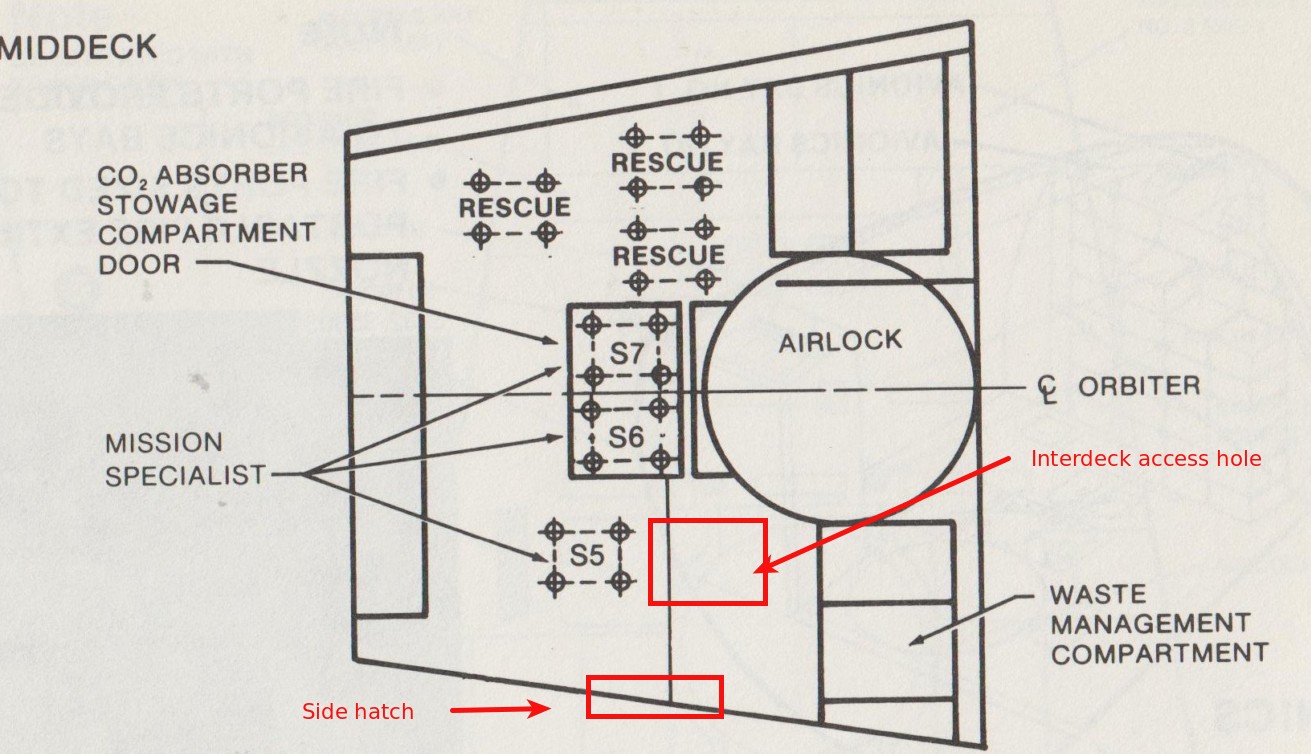 Here's a photo from the middeck (from the cape crusader link, annotated by me). 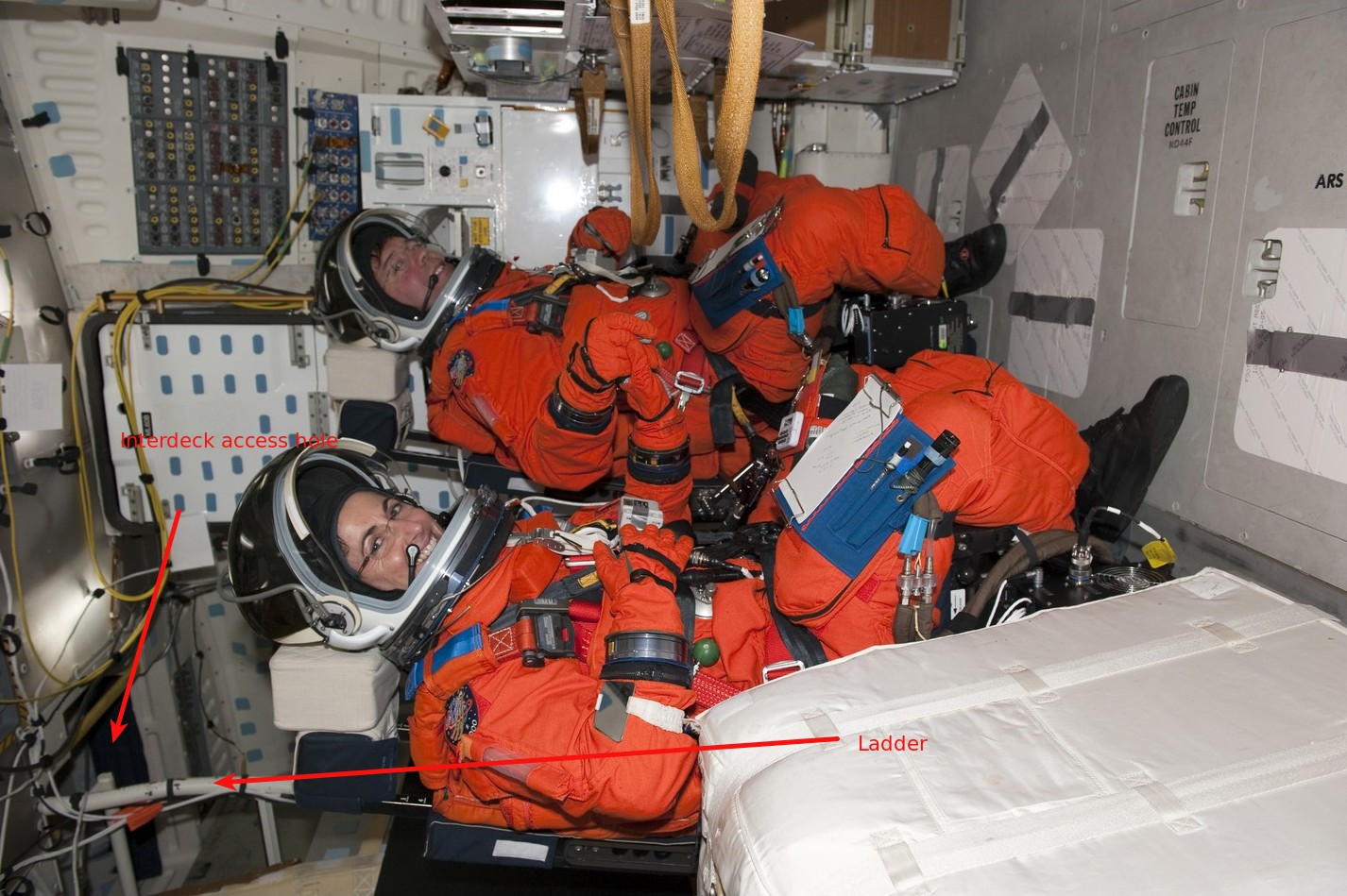 Training for both kinds of ingress took place in JSC's Bulding 9. The small shuttle nose mockups in the left and center of this picture could be pitched up 90 degrees. Their interiors were flight-like. 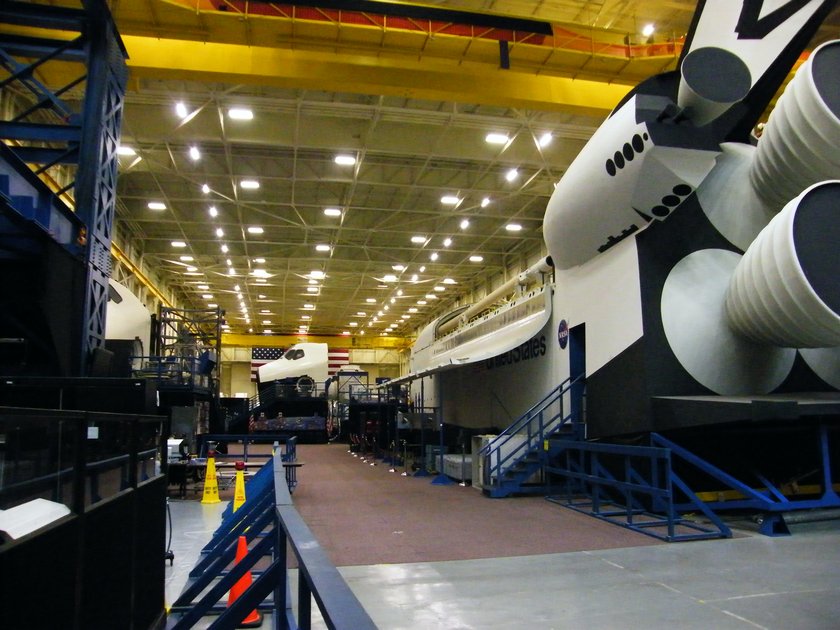 It's actually much easier for the crew to enter the vehicle and sit down when horizontal than when the vehicle is stacked and in the vertical position (no climbing up over the MS1/2 seats to reach the commander and pilot seats). For the CEIT the logistics are quite simple. In the OPF then have movable platforms with staircases (similar to what you use to provide stairs for airliners at airports without jetways). Though instead of being just one set of stairs that lead to the door that sticks out perpendicular to the craft, the mobile platforms used in the OPF have a deck that fits along side of the shuttle to provide access to the side of the vehicle instead of just providing a way in/out of the side door.

For the suited crew, the crew just walks up the stairs and through the door into the vehicle. The ascent/entry suits allow plenty of mobility for walking and moving around. The Pilot and commander still have to climb over the C3 panel to get to their respective seats, but that too has a small temporary step placed to assist them up and a cover over the top of the C3 panel to prevent damage to the panel and switches.

There were always a number of pictures taken at the CEIT, (as well as for general vehicle processing in the OPF) so I wouldn't be surprised if you could find a picture of the actual mobile stairs/platform used somewhere on the internet. It will be the same platform that allows the workers is the OPF to access the side of the vehicle for inspection and repair during normal orbiter processing (without having to use an extension ladder with tennis-balls over the tips...)

Ingress to the vehicle when it is stacked and vertical is the same whether it is in the VAB or out on pad 39 A/B. In the VAB you have a "floor" where the floor at each level extends out and fits close to the side of the stacked vehicle providing worker access at just about each level. On the pad you have the walkway that extends over to the orbiter side door (the enclosed walkway you see the crew using to get into the vehicle on TV).

I don't know of any time the crew actually enters the vehicle in the VAB, but they can certainly walk out and inspect how readying for flight is going at any point in time. Getting in for flight at the pad utilizes a number of temporary steps and platforms that the close-out crew provides to help get the pilot and commander in their seats before getting any mission specialists strapped in. The pilot and commander have to enter the door and physically climb up to their seats using the temporary platfoms. The mission specialists are more or less at the level of the door, so their climb into their seats is more or less a horizontal translation from the door into their chairs.

At any rate, there is much more involved in getting the crew into their seats when the vehicle is vertical.

4
Was a real Space Shuttle ever used as a really big simulator?