What kept Vostok/Voskhod from tipping or rolling upon landing?

Considering that the reentry capsule of Vostok and Voskhod were spherical, what kept them from rolling or tipping after landing?

Soyuz has a flatter bottom, so I would expect this to be less of an issue.

To summarise information already provided in the comments, there was nothing that prevented Vostok and Voskhod spherical reentry capsules from tipping or rolling after touchdown due to inertia of the impact.

If landed on a flat terrain, the capsule shouldn't roll too far after the impact though as the capsule's center of gravity was lower than the geometrical center of the sphere and rolling friction together with the counter-acting friction force of dragging the parachute behind would eventually stop the roll.

Also many photos of the flown capsules show deviation from sphericity at the bottom: 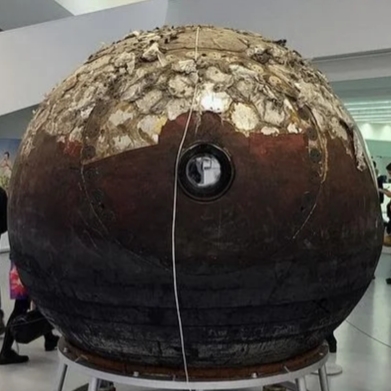 Maybe this is effect of ablative heat shield material being removed by ablation during reentry, or maybe the capsule was designed like that from the start.

In all of the six Vostok missions the pilots ejected with their seats from the capsule prior to the capsule's landing, hence the tipping/rolling wasn't a problem.

According to this source, Kosmos 47 mission (the first unmanned test flight of Voskhod hardware) was moved from it's landing spot by the wind:

1964 October 7 ... The spacecraft penetrated 90 mm into the ground. The strong winds caught the parachute after landing and dragged it 160 m, but if a crew had been aboard they could have quickly commanded separation of the parachute.

The most relevant reported case was for a Zenit reconnaissance spacecraft, which was similar to Voskhod capsule:

... [there was] an incident in the recovery of a Zenit reconnaissance satellite capsule, which was the same type as Voskhod and Vostok. It descended in the Ural mountains, landed on a 30 degree slope, and rolled 300 m before coming to a halt

Further web search revealed it was Zenit-4 spacecraft launched 01.07.1964 as Kosmos-34 and the problem was exaggerated by the landing back-firing system not working as intentded.

I couldn't find any reports of the problem of the capsule rolling after landing for the actual Voskhod-1 mission.

Voskhod-2 mission had some more problems than just rolling in the capsule after landing. They had problems with reentry burn and service module failing to separate, hence landed far away from planned area in deep forest. So they wouldn't have rolled too far between the trees.

The forest was so dense that the rescue team found a closest suitable spot only 1.5km from the capsule and had to chop down some trees for helicopters to land. The crew then skied to the helicopter two days after landing.

Regarding Soyuz capsules, I've performed some research, and surprisingly, it isn't as stable as OP suggested in the body of the question.

I went looking for photos/videos of tipped over Soyuz capsules of the last 3 models (MS-xx, TMA-xxM and TMA-xx) for the last 17 years (since 2002).

It happens to be that almost 40% of all landed Soyuz capsules for the last 17 years were laying on their side during recovery.

P.S. If anyone is interested in how I arrived to 40% figure, below is the information I've found:

Out of 22 Soyuz TMA capsules, I've found evidence of at least 8 that have landed on their side (this is at least 36% of all landings):

Out of 20 Soyuz TMA-M capsules, at least 8 landed on the side. This is at least 40% of all landings:

Out of 12 landed to date Soyuz MS capsules, exactly 5 have landed on their side (including MS-10 that made in-flight abort). This is 43% of all landings.

P.P.S. Even derived from Soyuz Shenzhou capsule sometimes ends up on its side

Not the answer you're looking for? Browse other questions tagged landing vostok-program voskhod-program or ask your own question.

12
Could a Soyuz land in water?
5
Could the Orion or Apollo command module safely land on land in an emergency due to a navigation error?
0
From which direction was the Falcon 9 1st stage's landing approach (BulgariaSat-1)?
10
Is it possible for something to fall straight down to earth? What are the requirements?
13
Which crewed spacecraft provides the gentlest decent and/or landing?
3
When did soviet capsules begin using retropropulsion immediately before landing?
21
How did the Vostok ejection seat safely eject an astronaut from a sealed space capsule?
2
Why was Voskhod 1 at an inclination of 64.7° degrees while Salyut 6 launched from the same latitude was at 51.7°?
17
Highest apogee of a Soviet/Russian crewed spacecraft?
8
Did Yuri Gagarin really telephone officials in Moscow to come pick him up?