Why do the optimal thrust vectors point so far away from the velocity vector for the Psyche mission?

The question Psyche 16 - What will be learned in 2026? got me reading Wikipedia's Psyche (spacecraft) which links to the 35th International Electric Propulsion Conference paper Development of the Psyche Mission for NASA’s Discovery Program (IEPC-2017-153) which says:

Accomplishing the project’s science objectives requires traveling to Psyche and orbiting the asteroid for a period of 21 months. In order to reduce operations costs and receive science data as early as possible, it is desirable to minimize the trip time from Earth to Psyche. Therefore, the fundamental objective of the mission design effort is to deliver the necessary spacecraft mass (including margins) to the asteroid Psyche as quickly as possible. The constraints on the trajectory imposed in the Discovery 2014 Announcement of Opportunity (AO) included a maximum allowed launch vehicle performance capability (which corresponded to an Atlas V 411 launched from Cape Canaveral, Florida) and a launch readiness date prior to December 31, 2021.1 (The AO guidelines allowed the use of higher performing launch vehicles, but at an additional cost to the project). To enable the selection of multiple winners with staggered launch dates, the AO also asked teams to identify an alternative launch period in 2023. The final Psyche proposal included launch options in both 2021 and 2023, and ultimately NASA selected the 2023 launch opportunity.

Early studies showed that the amount of chemical propellant required to reach and orbit Psyche within a reasonable time is prohibitively high. This led naturally to the use of electric propulsion and low thrust trajectories for the mission. Prior to the first down selection in September 2015 ("Step 1”), Psyche’s low thrust trajectory design work was conducted using MALTO.14 From that point onward (“Step 2”), all trajectory design work was conducted with the trajectory optimization program Mystic.15 Mystic is a high-fidelity optimization tool that was used for all mission design and maneuver design work for the Dawn Mission to Vesta and Ceres. Mystic has assisted other flight projects including the Cassini and Artemis missions. Mystic uses a second order optimal control algorithm called Static-Dynamic Optimal Control (SDC)16 based on Bellman’s principal of optimality. SDC achieves both the necessary and sufficient conditions.

The illustration shows thrust vectors almost 30 degrees away from the velocity vector at the end of the propulsive segment before Mars flyby gravitational assist.

Question: - Using low thrust electric propulsion, what benefit does the strong radial component of thrust provide for raising an orbit? - Does the large density of arrows near this point indicate a boost in thrust or reduction in velocity, or is it just a peculiarity of the drawing?

Figure 2: Example 2022 launch trajectory plotted as a green line. Thrust acceleration is indicated by the yellow vectors, arcs without vectors are either forced to coast or coasting is optimal. 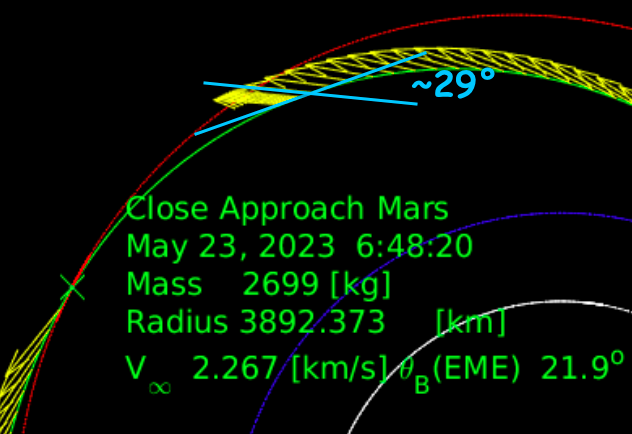 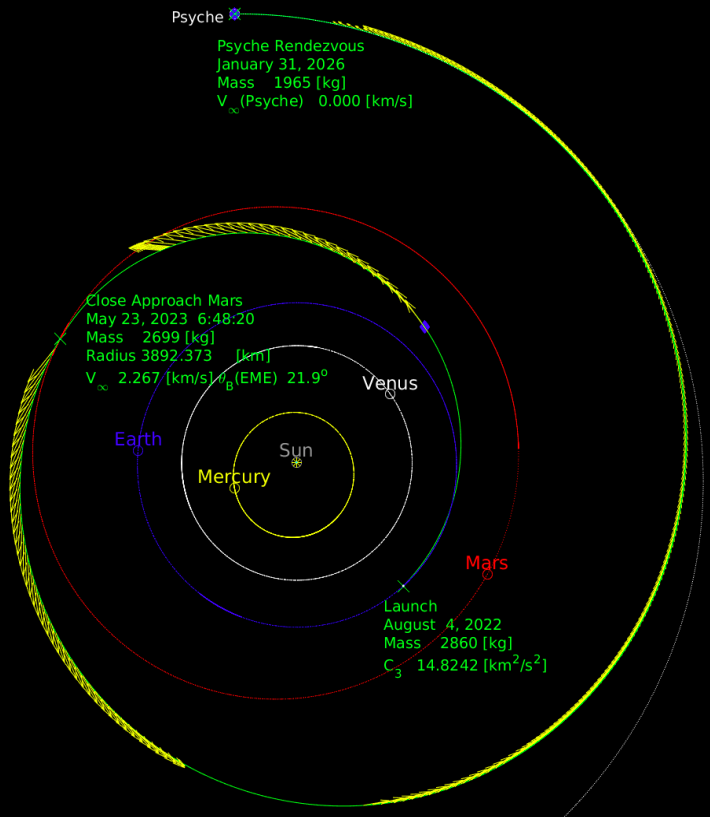 There are several effects, that all seem to apply in this case.

The next two are likely from this motivation:

Therefore, the fundamental objective of the mission design effort is to deliver the necessary spacecraft mass (including margins) to the asteroid Psyche as quickly as possible.

The plotted trajectory tries to push the aphelion closer at all parts of the journey. Without the thrust provided (ignoring matching velocities for a moment), the Mars flyby would put the encounter at a point counter-clockwise from Psyche, which means missing the asteroid

It's just not desirable to wait for a better planetary alignment given the time restraint.

9
What do the shaded vertical lines in the animation of Gravity assists of space probes, mean?
6
Psyche 16 - What will be learned in 2026?

3
Modifications to impulse burn trajectory for low thrust propulsion
9
Optimal trajectory for solar electric propulsion?
14
Are patched conics (and by induction, KSP) "useless" for simulating ion propulsion?
4
How to find the optimal launch trajectory for a rocket launched from a planet with an atmosphere?
3
How many times will the Photon fire its Curie in order to "reach the right spot" to deploy CAPSTONE towards the Moon?
4
What does a 6-month GTO to GEO transfer look like in practice?
3
Why was SERT-1 put in a suborbital trajectory (4000 km apogee) while SERT-2 (1970-009A) was put in a 1000 km circular polar orbit?
3
What's this small source of glowing blue plasma next to Psyche's Hall effect thruster for? What does it do and why does the plasma curve and connect?