Have any knots been tied incorrectly on a spacecraft?

Has the wrong knot been tied on a spacecraft? For example, a clove hitch instead of two half-hitches? 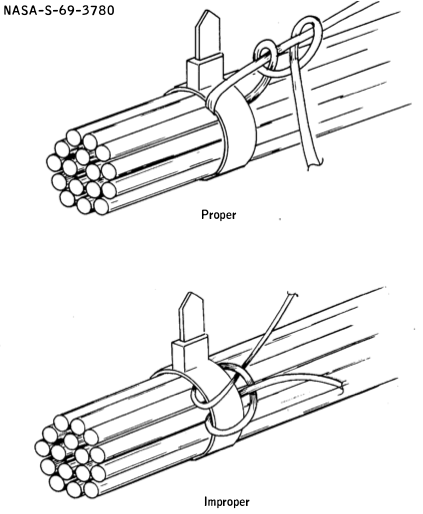 An apparent installation error on the forward heat shield mortar umbilical lanyard was found during postflight examination of Apollo 11 in that all but one of the tie-wrap knots were untied. This series of knots secures the tie-wraps around the electrical bundle and functions to break the wraps during heat shield jettison.

The knots should be two closely tied half-hitches which secure the tie-wrap to the lanyard (fig. 16-6). Examination of the Apollo 10 lanyard indicates that these knots were not two half-hitches but a clove hitch (see figure). After the lanyard breaks the tie-wraps , if the fragment of tie wrap pulls out of the knot, the clove hitch knot can untie, thus lengthening the lanyard. Lengthening this lanyard as the umbilical cable pays out can allow transfer of some loading into the umbilical disconnects. Should a sufficient load be transferred to the disconnect fitting to cause shear pins to fail, a disconnect of the forward heat shield mortar umbilical could result prior to the mortar firing. This would prevent deployment of the forward heat shield separation augmentation parachute, and there would be a possibility of forward heat shield recontact with the command module.

Not the answer you're looking for? Browse other questions tagged equipment or ask your own question.

-1
What was the first piece of wood to reach the far side of the Moon? Or the first spacecraft?

8
Was this printer shown the ISS in 2015 built specially to work in microgravity?
4
Which specifications should a tablet computer have in order to work in outer space?
6
Satellite manufacture and cleanliness
2
Have there been long-term observations of the effects of lunar exposure to equipment?
3
Has a lander/rover ever examined or photographed another mission?
4
How are umbilical connectors held in place until their intended detachment?
9
How did the Apollo survival kit desalter work?
9
Objects that have been on the Moon multiple times