Why does this image of Jupiter look so strange?

The Universe Today's Yes, This is Actually the Shadow of Io Passing Across the Surface of Jupiter shows several images of Jupiter taken by JunoCam.

Why does this image look so strange? Instead of an equator and one or two poles, all I can see is what looks like lines of latitude, everywhere.

The file name in the image's original url is Perijove_22_-_Composite_-_5.jpg which may offer a way to look up this Junocam image. 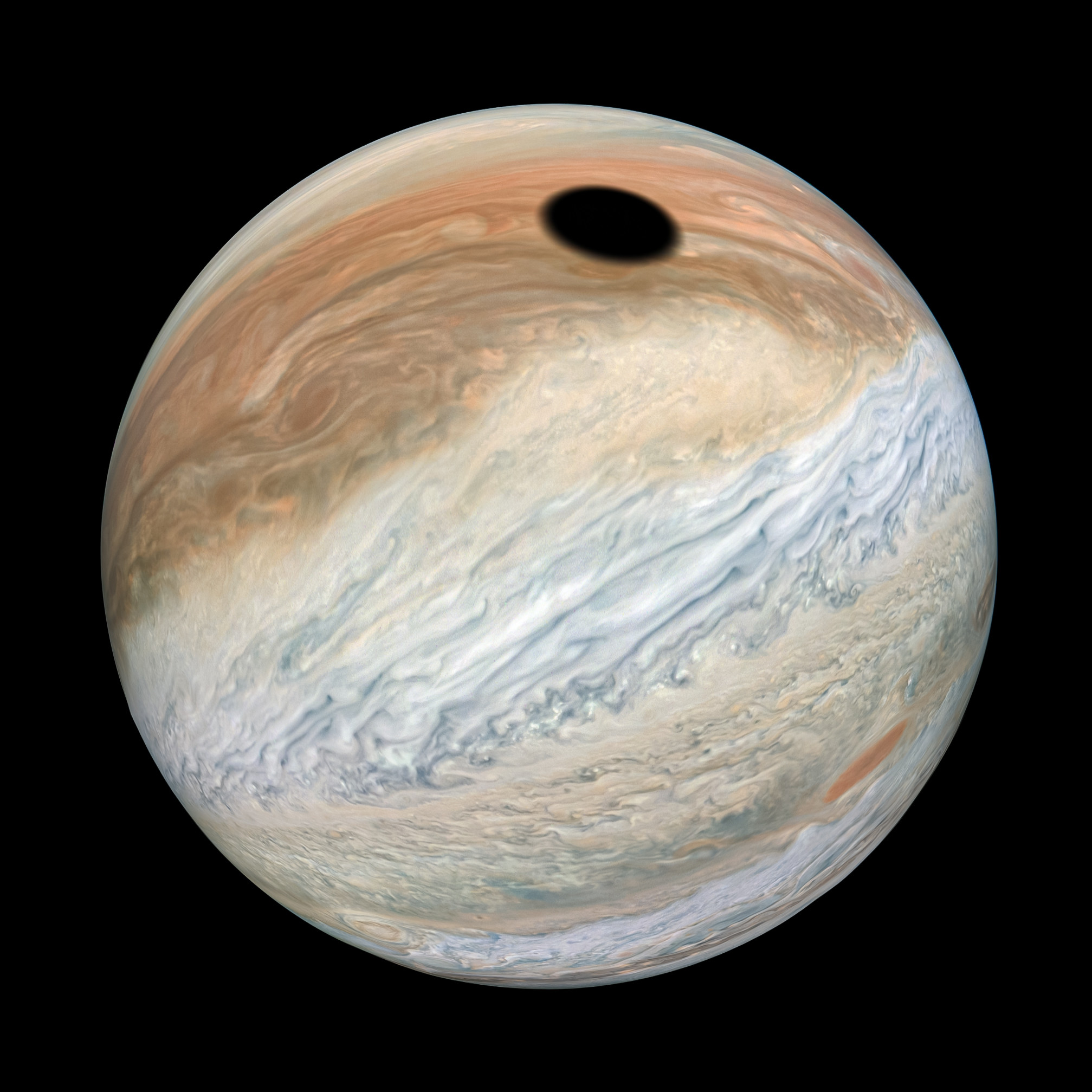 As @Hobbes mentioned it is not an image of an entire hemisphere but it has been distorted to allow for wide angle vision. That's why it looks so strange.

The metadata from those 6 images shows that they were taken with exposures of $3.2\; ms$, with $2\; min$ of separation between shots, for a total of $10\; min$. Since this was made during the 22nd perijove we should expect the spacecraft was moving quite quickly, so those 10 minutes can make a huge difference in terms of where the spacecraft was located and how Jupiter looks like in each image. In fact the first image was taken at an altitude of $12142.6\; km$ while the last one was taken at an altitude of $7861.6\; km$ (a $35\%$ decreese in distance) and with that it moved several degrees in latitude ($\sim25^\circ$) and longitude ($\sim12^\circ$). So, the task of joining these images toghether is probably complicated since you have different angles for different features. He probably had to overlay the images on a virtual sphere while joining them by using some specific projection software like blender. After that he probably moved the camera around (virtually) until he found the best place to see everything with a huge FOV stretching to the horizon to take the final image.

Assuming Jupiter is spherical, using some trigonometry, the formula for the area of a spherical cap, Jupiter's radius of $R_J = 69911\;km$ and the altitude of Juno over Jupiter's surface in each shot we can make some calculations

and estimate the surface area covered to be $10.7\%$ of Jupiter surface for the closest image in the stack and $12.4\%$ for the one taken the farthest.

For comparison look at the size of Io's shadow as seen by Hubble in 2017 and your image. 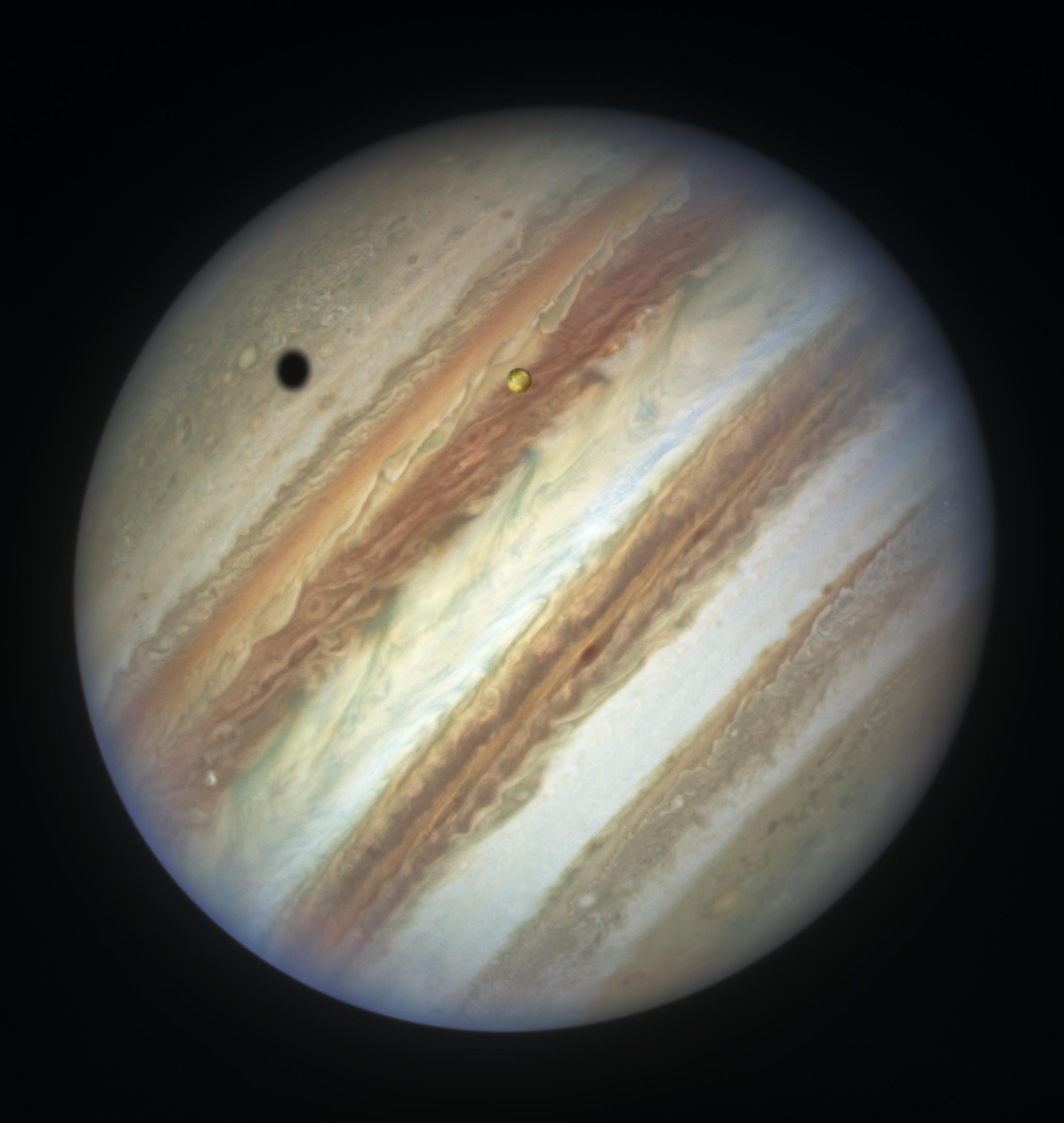 Io's shadow is larger in yours because you are seeing it in a small fraction of the area that here, from Earth distance, Hubble can see (almost $50\%$ of Jupiter from here).

You can compare known features in similar composites like for example the size of the Great Red Spot as seen from Earth (using the ESA/NASA Hubble Space Telescope) with a composite made by Kevin M. Gill with images taken by Juno during the 17th perijove. 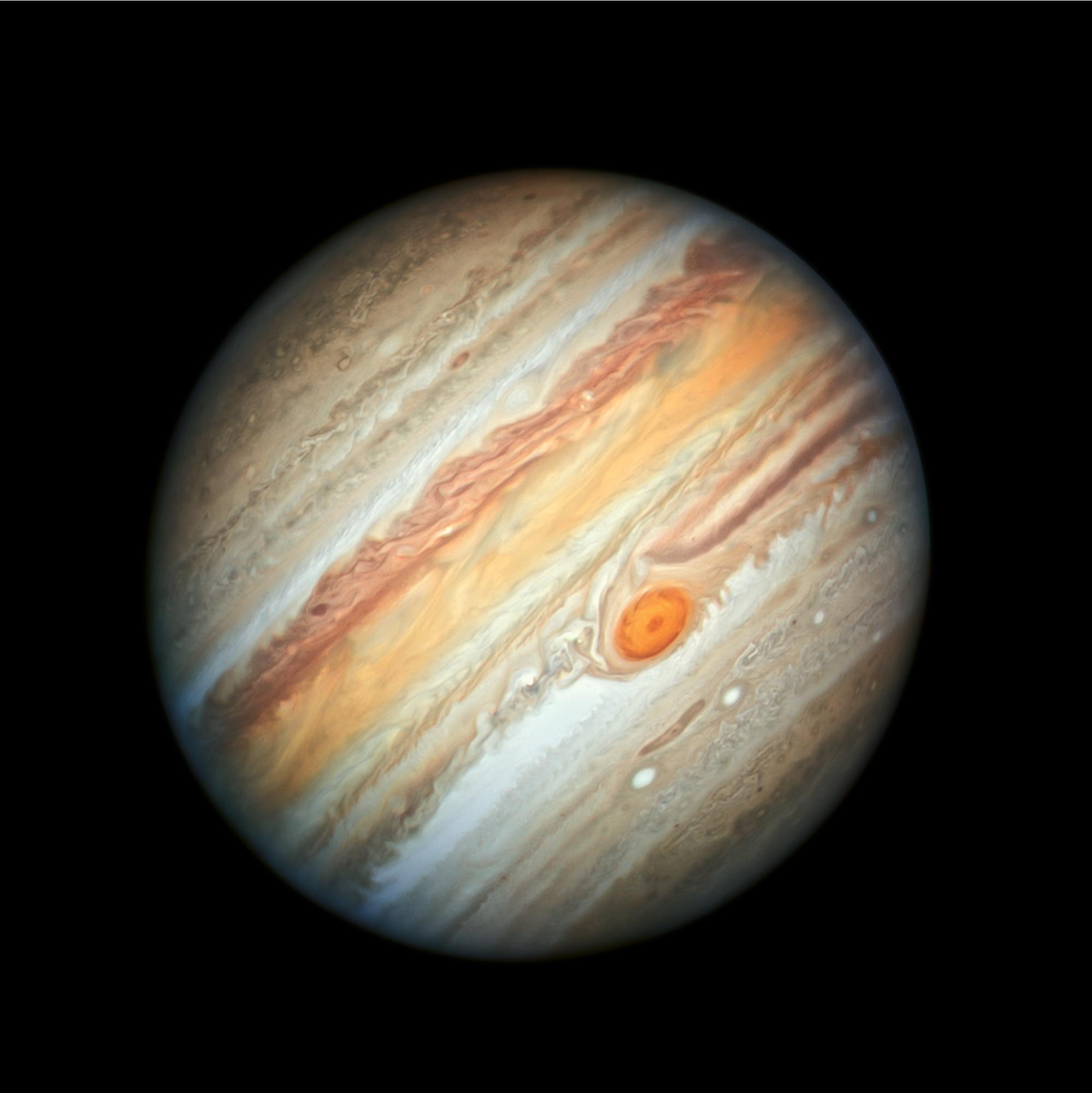 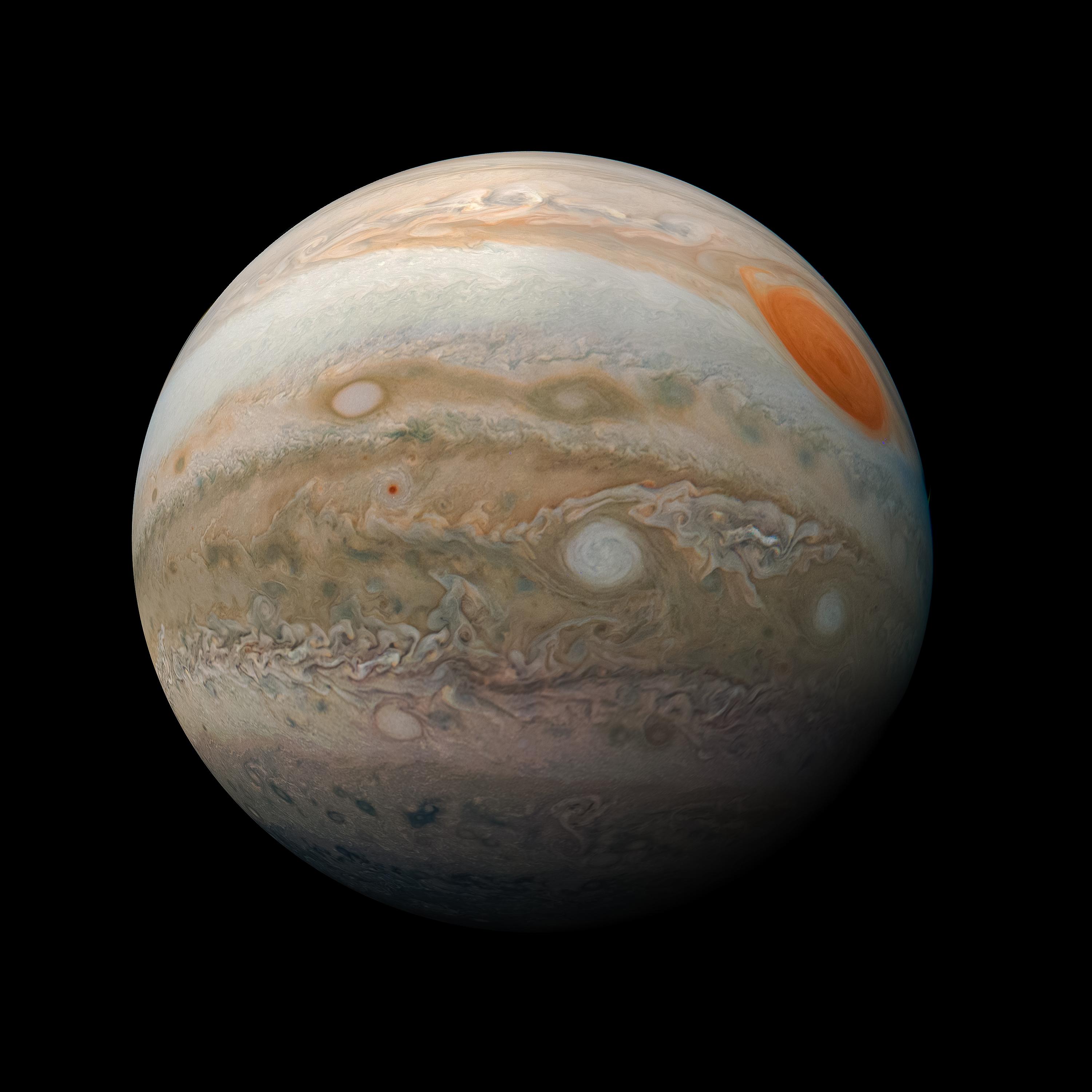 Your image is even more distorted since this image was made at least twice as far as the one you are asking about and thus it covers around $\sim20\%$ of Jupiter's surface area.

If you want to see how was the actual view (geometrically speaking) Kevin has also done a 360-panoramic video for us to enjoy the view. As you can immagine to get that into a flat image you need to make huge distortions and that's why a fish-eye lens kind of transformation was used in the final composite.

This effect is also well known in cameras; when you change your magnification to compensate the change in distance to the object to frame it in the same way in each shot. As you can see distortions are expected when you get closer to the object (in this case is a face).

I find also very useful to watch this video of the descent of the ESA's Huygens probe over the surface of Titan. The many cameras of the probe are arranged in such a way that a composite can be easily made and you can see the limb of Titan (the horizon) in the same place during the entire descent. Watch from the 3:20 time mark and notice how the 3 stripes on the nadir (which are 3 more or less parallel mountain chains) become more and more curved as the probe descends. This makes sense, objects at the nadir are getting close faster than objects in any other direction, thus if you want to mantain the boundary of your image fixed you need to transform the relative position of each pixel inside the image like so. This is commonly done in an image processing technique called "tiny earth".

As a bonus I want to point out that this thing is one of many basic things that flat-earthers, space exploration deniers and other conspiracy nuts are unable to understand when they make claims like these (in particular note the difference between the last two pictures): 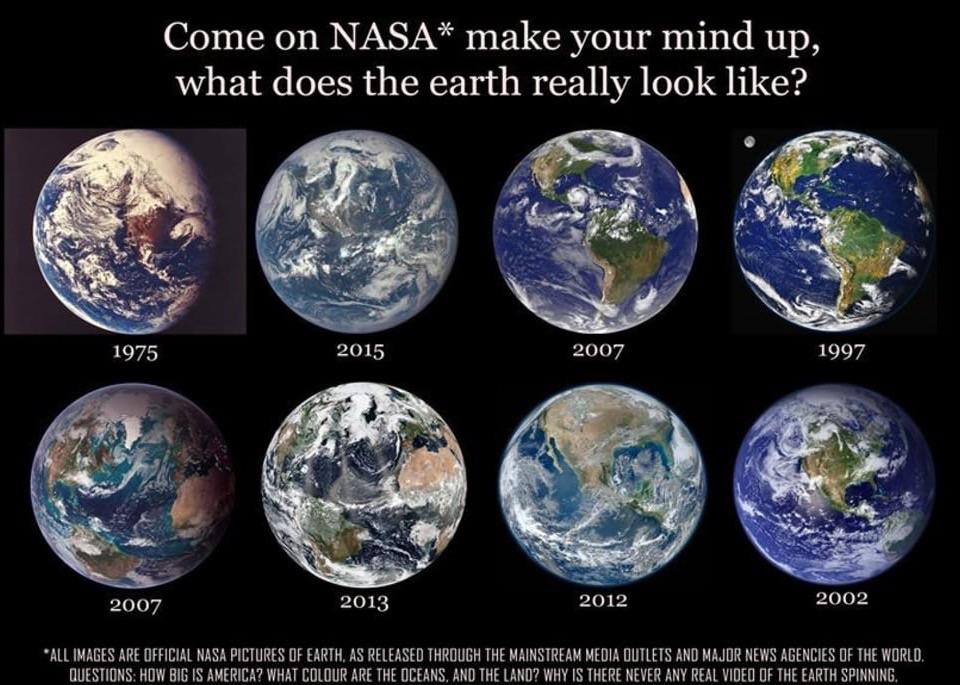 Not the answer you're looking for? Browse other questions tagged jupiter juno or ask your own question.

91
How did Apollo 16 capture this full photograph of the Moon's far side?
44
Is Jupiter bright enough to be seen in color by the naked eye from Jupiter orbit?
20
Has any object launched from Earth gone into the Sun?

8
What were the circumstances of this impact event on Jupiter in 2012?
7
Why does the Juno spacecraft flyby Earth on the way to Jupiter?
8
Why does Jupiter have the colors it does?
20
How long does it take for a signal to travel between Earth, and Juno at Jupiter?
1
How to understand this NASA animation of Juno's passes near Jupiter?
6
The plane of the orbit of Juno around Jupiter is not the ecliptic plane. How did it get into this plane?
5
Juno's original orbit around Jupiter - is this apsidal precession? If so, need expression
3
Why does Jupiter not appear flat at zero phase angle like the Lommel-Seeliger law says?
12
What are these features on this moon of Jupiter?