Is it possible to "map" the Interplanetary Transport Network?

Cartographers have always been valued members of any exploration team. Even the teenage George Washington had experience with the "compass and chain." Every Terra Incognito is in need of a good map.

Much has been made, rightly so, of the Interplanetary Transport Network. This is usually described as a series of pathways through a stellar system that requires very little energy for a spacecraft to follow, rather like a bit of flotsam floating down a lazy river.

There are some linguistic problems with our definitions, however, which this question and its answer illustrate. Both "pathways" and "network" seem to imply that there are fixed routes that can be drawn on a 3D map, but we're actually talking about time-dependent trajectories rather than fixed pathways, and the network is more like virtual packet-switching than your cable & router LAN.

My question: is it feasible to create a usable 4D "map" of the Interplanetary Transport Network?

By "usable 4D map" I mean a program that a mission designer could input destination, launch window & maximum delta-V, and get usable flight plans back.

By "feasible" I mean, are the data sets sufficiently constrainable (given that the 'n' in the n-body problems & the number of trajectory legs can go large) that the software can be run on something less than a supercomputer.

There is a tool "LTool" by Martin Lo from JPL to compute low-energy transfers via chaotic trajectories near Lagrange Points.

As I know, tools are not public, and used internally at the JPL.

Martin Lo published several maps in his articles, for example in "The InterPlanetary Superhighway and the Origins Program" (2002) http://www.gg.caltech.edu/~mwl/publications/papers/IPSAndOrigins.pdf - check Figure 11-12 for Poincare maps. They shows only principal capabilities of ITN (IPS - interplanetary superhighway). Searching of exact paths is hard due to chaotic nature of ITN and manifolds.

The Lagrange 1 and Lagrange 2 regions are the hubs of the trajectories that Ross, Lo, Martin, and Belbruno advocate. Szebehely developed equations to find the L1 and L2 regions. Using his equations I made a L1 and L2 spreadsheet. 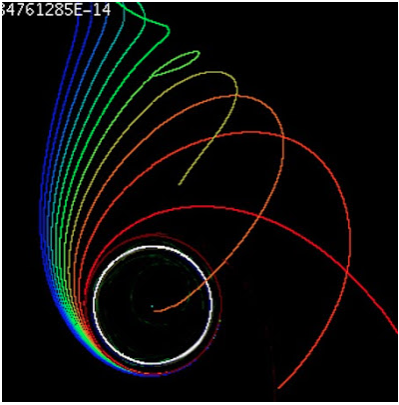 As you can see some pellets find their way to near Earth perigees and others are thrown into heliocentric orbits outside of Earth's sphere of influence. 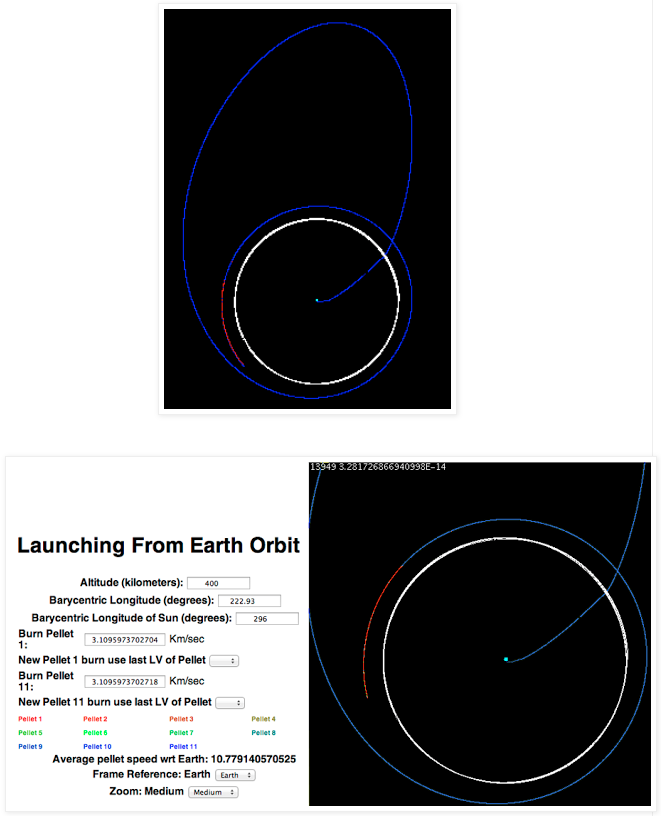 Above a ship is launched at a certain phase of the moon, set by inputing Barycentric Longitude of Sun. As it passes by the moon, a lunar assist raises apogee. At apogee the sun's tidal influence raises perigee allowing a ballistic slide to EML2. LEO to EML2 is accomplished with 3.1 km/s.

This is somewhat like the path Belbruno used to save the Hiten Mission. Note that Hiten had already achieved a 290,000 km apogee. 3.1 km/s had already been invested when Belbruno stepped in.

Is 3.1 km/s from LEO to a loosely bound lunar orbit ground breaking and revolutionary? No. Farquhar's route from LEO to EML2 takes only 3.4 km/s. And Farquhar's route is about 8 days whereas the the trips out to the edge of Earth's Hill Sphere and back take months. A .3 km/s savings is nice but not a major game changer in my opinion.

When it comes to the sun and rocky planets of the inner solar system, the 3 body mass parameter is miniscule. The trajectories from the Sun Earth L1 and L2 regions are much less varied and dramatic thatn the paths from EML1 and EML2. 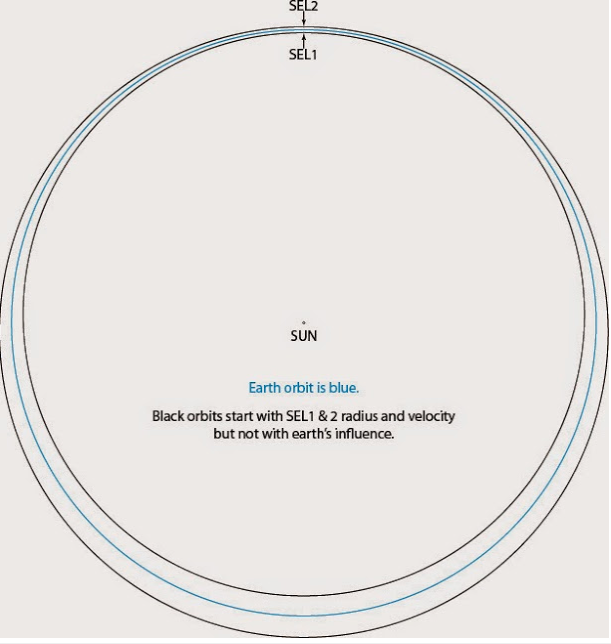 Above are the heliocentric orbits payloads would follow if nudged from the Sun Earth L1 and L2. These orbits have a semi-major axis little different from Earth's. That means the synodic period is quite large, about 20 years for the payload nudged from SEL2. And when the payload finally gets lapped by the Earth 20 years later, it's about 43º from perihelion. Not being close to Earth, Earth's gravity makes no dramatic changes to the payload path.

The payload released from SEL2 would not come back to a near Earth neighborhood until 160 years later.

I did a blog post Pot Holes On the Interplanetary Super Highway. Shane Ross, one of the architects of the ITN, left a comment:

Hollister, yes, the superhighway definitely has its limitations. It was inspired by comets, which have plenty of time, but of course we don't for planning space missions (unless we take Deep Time approach).

I suspect that gravitational corridors which naturally connect Earth-bound orbits with Mars-bound orbits using no-fuel do exist, but might take a long time to achieve (I'm thinking thousands of years of flight time between the two planets). But using some propulsion, we may be able to reduce that time to several decades. This is probably still too much time for a mission, especially a manned mission, so for now, conventional approaches will probably continue to be used.

Belbruno and Toppotu have found a path using some propulsion. It entails a 2 km/s aphelion burn to slide into a ballistic path into Mars capture. But a .7 km/s burn at a near Mars periapsis will also capture a payload into a loosely bound Mars orbit. So it is actualy 1.3 km/s more expensive than a straightforward Hohmann orbit.

These pathways are interesting when it comes to systems with a large $\mu$. That includes the Earth and moon, gas giants and their larger moons, as well as the sun and gas giants.

However it is not much use for departing Earth for other regions of the solar system. Departing from Earth, it's helpful to reach different parts of the Earth Moon neighborhood including SEL1 and SEL2, but that's about it.

As you might guess, I was once a huge fan of the possibilities of ITN. I've invested some time and effort studying it hoping to find just the sort of map you're asking for. I have pretty much discarded that hope.

Not the answer you're looking for? Browse other questions tagged trajectory software mission-design low-energy-transfer or ask your own question.