Has an astronaut ever seen another object in LEO pass by that wasn't mission-related?

The (currently unanswered) question ISS - Tiangong 2 minimum safe distance suggests that the two space stations passed within about 12 kilometers of each other. @peterh comments that astronauts in one station might have been able to see the other. Of course depending on the inclination difference the relative velocity could have been anywhere from fairly low to many kilometers per second, meaning that even if you were looking for it it could have been quite a challenge. You could literally miss it in the blink of an eye.

Question Has an astronaut ever seen another object in LEO pass by that wasn't mission-related in any way?

I've worded that to exclude objects or spacecraft that were recently released from the station (intentionally or otherwise). Of course something that was deployed weeks or months earlier would count as an answer, since orbits even with small delta-v's separate fairly quickly and don't tend to reunite.

It turns out it might be very common for astronauts on the ISS (or previously the MIR) to spot satellites. This is the distribution of the number of satellites in LEO for different altitudes 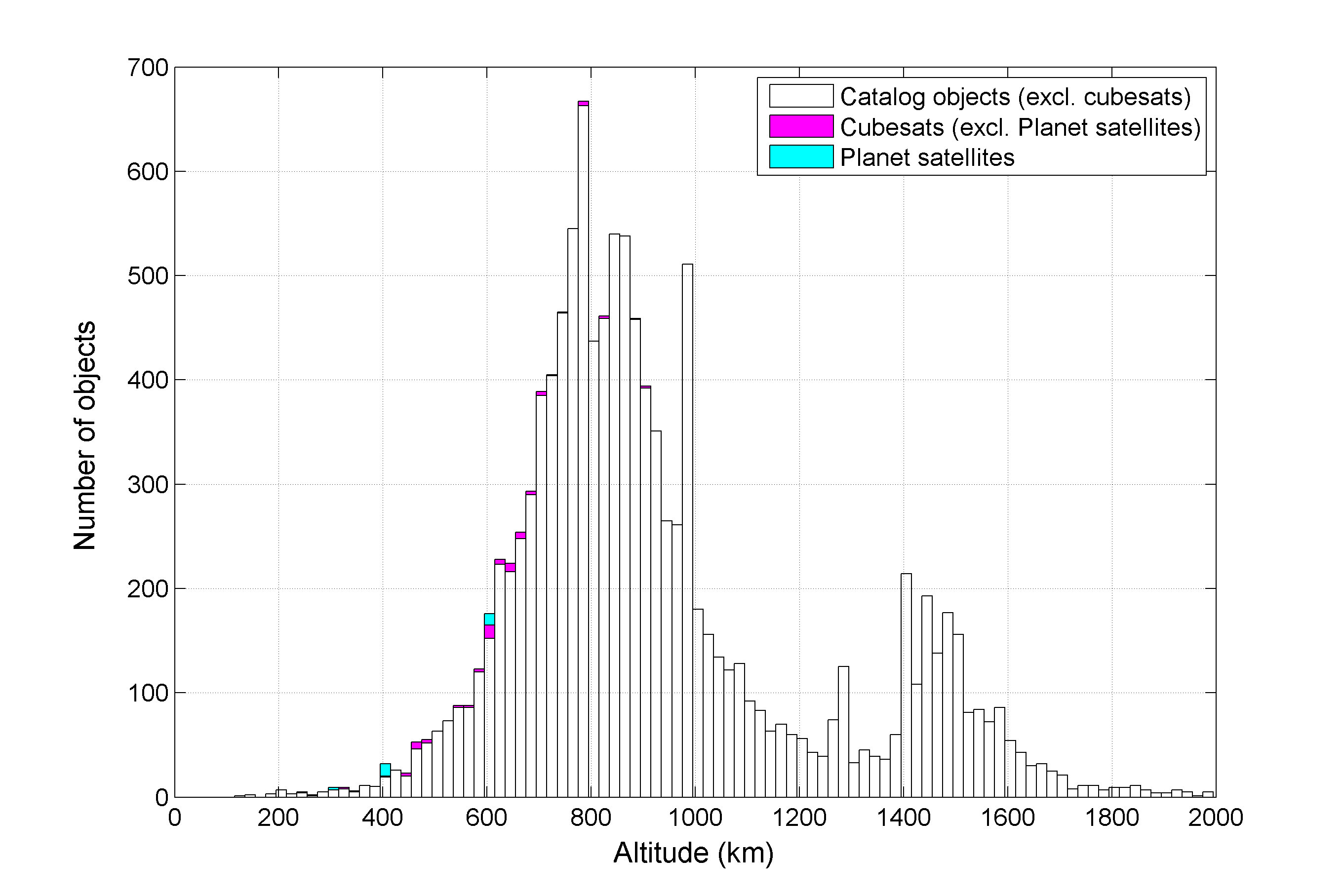 As you can see the ISS, with its $\sim 400 \; km$ altitude, is quite safe and alone below the huge carcass of LEO satellites moving around $800 \; km$ (it is also true that at that altitude the surface area of the carcass is very large and it is not as crowded as one might think just by looking to this histogram).

I see a few obvious pros and cons for these satellite observations from the ISS: 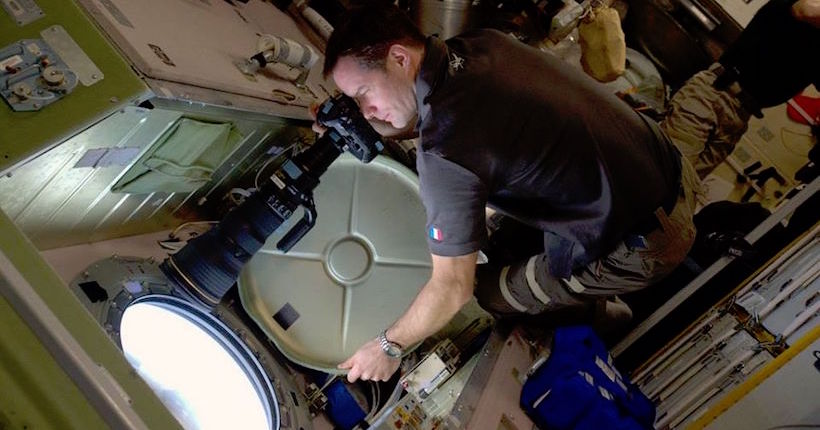 To answer your question: European astronaut Thomas Pesquet made a video from the ISS that shows several satellites popping up in the dark sky (I think I can see 3 of them in the video).

About halfway through the video, you may notice some small, bright objects streaking through the sky. ESA officials told Space.com that these are "probably functioning satellites," though scientists were unable to confirm which satellites they were. "The giveaway is the fact that the lights are not tumbling, which indicates they are actively controlled," ESA communications officer Daniel Scuka said in an email.

I wonder if someone here could be able to identify those satellites (given enought care).

Also, these can't be meteors since

a bright meteor burning up in the atmosphere typically has a duration of a second or less, possibly 2 or 3 seconds for larger objects. This movie, however, runs 25 times faster than real time, he said, meaning the objects are bright for several tens of seconds.

The objects' altitude doesn't fit that of meteors, either ... The typical altitude of a meteor is around 80 to 110 kilometers ... these objects are higher, at least 300 km. Meteors would not be visible at that height.

So, yeah. Thomas Pesquet has clearly seen a bunch of satellites from the ISS. There are also videos like this (which are not taken by any astronaut/cosmonaut but by the cameras outside the station) where you can clearly see four of five satellites crossing by.

The case of the possible Tiangong-2 - ISS encounter of 2017

All of the satellites mentioned above might be hundredths of kilometers away from the ISS so a close approach like the one you are mentioning should be spectacular (even if I've been unable to find any particular documented example of this happening). You should be able to see details and structure (and not only a bright point-like source).

At just $12.3\; km$ away, with $10.4\;m$ in length, the Tiangong-2 space station should appear with an angular size of $0.05^\circ=3'$, which is more or less the size of Mare Crisium as seen from Earth, just enought to distinguish its elongated shape with the unaided eye. With any of those great camera lenses they have onboard ISS astronauts/cosmonauts should have been able to see many features of the Tiangong-2 station. A spacesuit of around $\sim2\;m$ in lenght should be seen with an angular size of $0.01^\circ=0.57'=34''$ from the ISS, which is below the naked eye resolution; still you would see them as bright points if they got a few meters away from the Chinese station, but is still great for onboard cameras to take pictures of each individual. To Taikonauts on the Tiangong-2 at that time the ISS would have looked like the same size as the Moon (in particular $31'$) for them, enought to monitor the activities going on outside the station with great accuracy.

Sadly the Tiangong-2 was uninhabited at that time so no Taikonauts involved. I also doubt that the Tiangong-2 actually got that close to the ISS, there is no official anouncement of that event, neither released observations from ISS astronauts (a farily simple thing that should have happened) nor ground based observations (that even amateurs could have made without any difficulty) and the only source I can find for the close approach is that unanswered question on the forum.

I think this is more interesting since this actually is known to have happened. The Shenzhou-7 was inhabited by taikonauts Jing Haipeng, Liu Boming and Zhai Zhigang.

The encounter happened at longer distances ($\sim47\;km$) and the Shenzhou-7 is smaller than the Tiangong-2 ($9.25\;m$) so the view was not so spectacular from the ISS. Apparently the EVA of Zhai Zhigang (the first Chinese spacewalk in history) happened at the same time as they approached the ISS. We should ask him if he took a moment to see the ISS.

while the EVA was taking place on Sept. 27, 2008, the SZ-7 spaceship came fairly close (within 47 km) of the International Space Station (ISS)

The angular size of the Shenzhou-7 from the ISS had to be around $0.01^\circ = 67'= 41''$, which is as large as Jupiter as seen from Earth in good conditions (cameras would have shown its shape without any problem). A spacesuit would have looked $8.8''$ in size so like a bright spot with naked eye and perhaps a blob with high magnification lenses. The interesting thing is that Zhai Zhigang should have been able to see the ISS as a $0.13^\circ = 8'$ object, enough to tell the shape of the solar panels and modules of the ISS with naked eye and enough for good details (like seeing the Canadarm) with a good camera.

Really late additional, not to distract from the answer already given:

Although on STS-42, on January 24th, 1992—I remember this very vividly—we got a call up from the ground.

Typically they would ask you to look at something, “Look down at this, look at that, look at this system.”

This is window one, two [demonstrates], three is the commander’s front window, and as I recall, it was probably window number five.

They said, “Look out window number five. What do you see?”

And it was the Mir Space Station going by. Because the inclination of our flight had changed to 57 degrees, and the Mir flew at 51 degrees, it was just one of those really odd kind of coincidences that we were able to see the Mir. You couldn’t see the individual modules or anything, but I mean, it was not a star.

It was extremely bright and kind of irregular. That was my first look at the Mir Space Station

There was also an article I read about a Cosmonaut who claimed he could see Skylab, but I don't have that to hand anymore.

Not the answer you're looking for? Browse other questions tagged observation conjunction or ask your own question.

54
Is 75 meters an exceptionally close distance for two satellites to pass at >6,000 m/s?
19
Does the ISS have zenith-facing windows?
10
What is this huge, red, blinking light structure on Earth seen from the ISS in this video?
4
Is 45 km unusually close to pass the ISS and deploy a microsatellite without warning?
8
ISS - Tiangong 2 minimum safe distance
7
Did CNSA astronaut Zhai Zhigang see the ISS during an EVA?

6
Has an astronaut ever seen pixies, ELVEs, sprites or blue jets (without a camera)?
14
Why do satellites appear to move faster when overhead and slower closer to the horizon?
3
Has a cubesat ever caused a problem for another spacecraft? Examples? Close calls?