If a spaceship ran out of fuel somewhere in space between Earth and Mars, does it slowly drift off to the Sun?

Pretty much what the title is saying. I feel like I am missing something fundamental here and this is driving me crazy.

Does a spaceship which is out of Earth's gravity drift to the Sun eventually?

What you're missing is some combination of the following:

All the planets stay in orbit around the sun because orbits are generally long term stable.

A spacecraft flying from Earth to Mars follows a loop, like in the picture below. 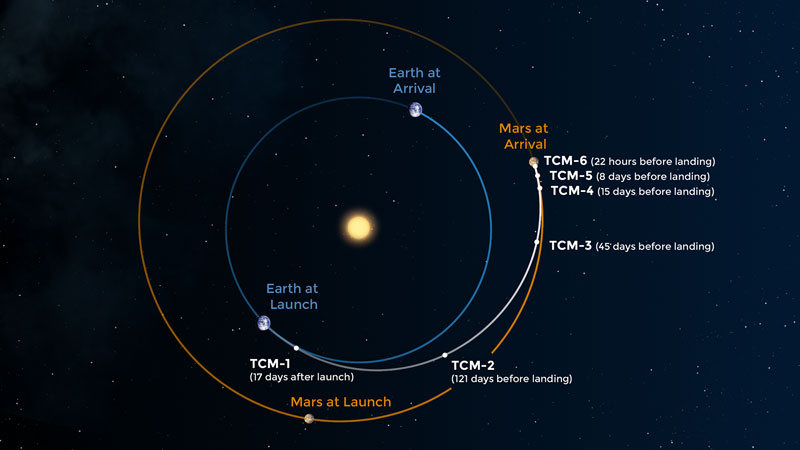 Most of that time, the engines aren't firing, it's just an orbit with higher eccentricity that takes some fuel to enter into, but once in that orbit, it travels that arc naturally.

Escaping Earth takes a lot of fuel, and additional fuel is used to enter the longer orbit after which, it's flying towards Mars, playing catch-up in a sense.

When close to Mars, adjustments and rockets to reduce velocity.

What would happen to the craft depends on where it runs out of fuel, but you said between Earth and Mars. It would either just enter a slightly longer than Earth orbit or, perhaps maybe crash into Mars, though I think a near miss is more likely.

What you're describing, almost happened once, voyager 1 to Jupiter, though the article's final sentence, the author writes rather poorly saying

"would have gotten almost to Jupiter, and then come back toward the sun, which would not have been good"

That's only partly accurate. It would have almost made it to Jupiter, then stayed in a more elliptical orbit, moving closer to the sun for a while, only to fall further away again as the orbit continued.

It is a mistake to talk about being "out of Earth's gravity" as if there a fairly sharp boundary where Earth's gravity dropped to zero. If you double your distance to an object, the force of gravity drops to 1/4 of the original force. So it does eventually become negligible, but there is no sharp dividing line.

Also, it is not Earth's gravity that keeps us from falling into the Sun. Remember, we are in orbit around the Sun too. We are moving at the same speed as Earth, and that's the speed you need to be moving to have an orbit of this radius. So if the Earth disappeared but all the people remained, we would all suffocate but we would keep orbiting the Sun.

Current spacecraft designs do not consume propellant while en-route to Mars because there is no need to apply any thrust. A launch to Mars would begin with an acceleration to at least low-Earth-orbit velocity. The spacecraft might then briefly orbit Earth, or simply continue accelerating to escape Earth's gravity and attain a trajectory which is a transfer orbit. Either way, at some point still very near Earth (relative to Mars), the spacecraft will shut down its engines and coast along the transfer orbit (an orbit around the Sun which more-or-less crosses the orbits of Earth and Mars). This orbit intersects Earth's orbit at the time and place Earth was during launch, and will intersect Mars' orbit at the time and place where Mars will be upon arrival. Upon arrival, the spacecraft will have to decelerate somehow to enter an orbit around Mars and/or enter Mars' atmosphere to land there. If the spacecraft fails to decelerate into orbit, it will remain on its transfer orbit, periodically crossing the orbits of Earth and Mars.

There are ideas for very high ISP propulsion systems which could theoretically shorten the time required to get to Mars. These systems would produce a small, constant acceleration - initially in a more-or-less prograde direction, but then turn around at more-or-less the halfway point to produce a retrograde thrust to slow down enough to be captured by Mars' gravity upon arrival. If such a system failed en-route, the vehicle would almost certainly miss Mars completely and find itself in an orbit around the Sun, probably with an apoapsis beyond Mars and periapsis somewhere between Earth and Mars.

In either case, a spacecraft becoming derelict enroute to Mars would not fall into the Sun; it would remain in a solar orbit unless/until it collides with a planet, perhaps after one or more perturbing planetary close approaches.

Building on the already great answers, it takes a significant amount of effort to reach the Sun, for example it's 55 times more energy than is required to get to Mars if starting from Earth orbit: It's surprisingly hard to go to the Sun.

The Earth is traveling in its orbit at approximately 30km/s and an object leaving Earth would need to actively decelerate to lose that speed before it would fall into the Sun. A craft running out of fuel would just continue in its existing orbit.

For further reading, see in answers to:

A spaceship in space is very different from a car on a flat road. If your car runs out of fuel, the friction between the tyres and the road cause the car to slow down until it eventually stops. In space there is almost no friction (because space is close to a perfect vacuum), so little that for the rest of this answer I will pretend there is none at all.

To get out of orbit of Earth, you need to move really fast. If you run out of fuel once out of the orbit of Earth, you will continue to move really fast because there is no friction in space. Your path will be bent by the gravity of everything, but only nearby (think inside the solar system) and massive (think the Sun, Earth, Jupiter, etc.) objects will have a noticeable effect. The closer and more massive the object, the bigger the effect.

While it is possible to speed up or slow down while passing these objects, you have to be close to them, and normally it takes a precise orbit to achieve this. So basically, you'll just keep drifting really fast unless you're really unlucky and crash into something. But because space is a vacuum, there's almost nothing to crash into.

It's possible if your initial aim was good enough that you could crash into Mars, assuming that was your destination and you weren't just planning on sailing past it.

Normally a spacecraft would use most of its fuel just leaving the earth. Retaining some secondary fuel for maneuvers. If it runs out of fuel early during liftoff it depends on how early it ran out to know what happens. it could either fall back to earth or end up in earth's orbit.

You'd expect if it runs out just a little before planned burnout time the spacecraft would be on a course to Mars but would have an altered trajectory.

During a planned launch to Mars, the spacecraft will be in free motion moving at a high velocity to get it to Mars.

share|improve this answer
answered Sep 21 '19 at 19:54
jmhjmh
$\endgroup$
add a comment  |
1
$\begingroup$
Want to improve this post? Provide detailed answers to this question, including citations and an explanation of why your answer is correct. Answers without enough detail may be edited or deleted.

It depends on the last thrust it had & direction it is moving to. Cause in space velocity of moving object remains same until it come across any gravitational forces.

Any object with mass including a spaceship, without means of acceleration, having a given velocity or not, will eventually end up at a gravitational relation with another object of much greater mass. This eventually can be from hours to millions of years, depending on various parameters like, the most important ones, space and time the event begins and probable velocity of the object. For an object going from Earth to Mars the most important factor is when, since the positions of those 2 celestial bodies may vary significantly, from been as close as seen in relative 'display star system' pictures conveniently show all celestial objects next to each other or simply much far away as at opposite sun orbital position, means the sun is somewhere between Earth and Mars. So the answer can be probably not, the object will keep going until affected by some other greater mass or yes, in the rare case where its travel routing stops when inevitably crosses the sun or close enough to orbit and been destroyed out of heat.

As mentioned by everyone else, a spaceship doesn't need fuel to keep going in space.

But besides that, not only the spaceship might keep moving in orbit around the Sun, depending on the angle and speed that your spaceship was going between Earth and Mars, it might even escape the Sun's gravitational pull and drift forever in empty space away from the Sun.

As an example we have Voyager 1, which left our solar system and is moving towards other stars to never come back.

In this case, it didn't gain the speed necessary for that just between Earth and Mars. But that doesn't mean it can't be done. ;-) If your theoretical spaceship has enough propulsion moving away from Earth, it might gain the speed it needs.

39
Does it require less energy to reach the Sun from Pluto's orbit than from Earth's orbit?
9
What is the delta-v required to get a mass in Earth orbit into the sun using a SINGLE transfer?
3
How would a Jupiter flyby have helped to get to the Sun? Why was it later ruled out?
3
How much less delta-v would it take to reach the Sun using Venus and Earth flyby's compared to direct?

18
How deep is the force well of L4 and L5 Lagrangian Points of Earth-Sun set?
13
Alcubierre “warp” drive and gravitation/orbital considerations
21
How did the Apollo astronauts train for the 1/6G lunar landing?
2
Questions about the Dynamic Solid Tide
3
Is there a way to reproduce Earth-like gravity on a spacecraft close to a more massive body such as the sun?
0
What Gravity does the Sun affect items with at the distance of 1 AU?
2
Would more or less gravity make you proportionately stronger?
8
How do stable equilibrium points work in GEO? If all geosynchronous spacecraft suddenly lost stationkeeping, would most “fall into” one or the other?