What does this NASA administrator's tweeted statement mean? What is the context? [closed]

Background: Teslarati's NASA head calls out SpaceX CEO Elon Musk over Starship event in bizarre statement might serve as a resource for answers if the question is successfully reopened.

Question: Would a similar statement about taxpayer money used in SLS/Boeing or the JWST (delays and cost overruns started circa 20111 and continue) be equally or more appropriate, or are delays with Commercial Crew even more egregious? Is this Jim Bridenstine tweet just a bit of "space snark" or do the sentiments reflect a legitimate beef?

My statement on @SpaceX's announcement tomorrow: 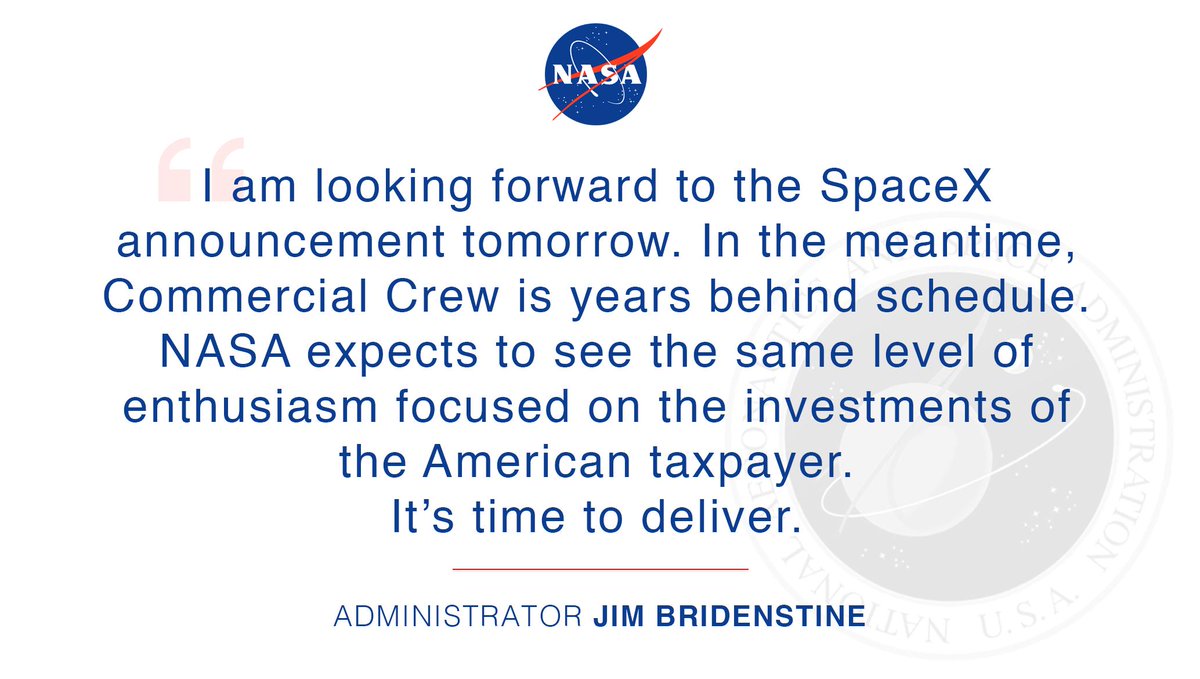 Text in the image:

I am looking forward to the SpaceX announcement tomorrow. In the mean time, Commercial Crew is years behind schedule. NASA expects to see the same level of enthusiasm focused on the investments of the American taxpayer. It’s time to deliver

Bridenstine also retweeted a comment from Ars Technica writer Eric Berger that said the statement did not read "as a shot to SpaceX, but rather a reflection of Jim's desire to see all NASA contractors meet their deadlines for government contracts."

NASA is waiting for progress on the Crew Dragon capsule (which exploded during an abort test in April 2019) and Mr. Bridenstine is upset that Mr. Musk is spending effort on Starship instead of delivering on the NASA contract. Bridenstine expressed a similar sentiment (poor communications with SpaceX) at a public meeting in May (following the test 'anomaly'), but his remarks were cut from the video.

Not the answer you're looking for? Browse other questions tagged nasa crewed-spaceflight commercial or ask your own question.

13
What are the consequences of NASA validating this "impossible" space drive?
19
Why does SpaceX appear to get less funding from NASA for the same thing as competitors?
7
What role does the NASA deputy administrator play?
12
Why does NASA not replicate existing manned launch systems?
1
What will the US send to Mars as mentioned in this statement to the press?
1
Is this a NASA building in the background?
4
How does the Commercial Crew Program differ from the way NASA's previous crewed systems were developed and operated?
5
How does NASA build acclimatisation into mission plans for astronauts?