How were Mars' zero elevation datum defined? What are their shapes?

Discussions on Boiling ponds and pools on Mars? led me to Wikipedia's Mars; Geography and naming of surface features which says:

Because Mars has no oceans and hence no "sea level", a zero-elevation surface had to be selected as a reference level; this is called the areoid124 of Mars, analogous to the terrestrial geoid. Zero altitude was defined by the height at which there is 610.5 Pa (6.105 mbar) of atmospheric pressure.125 This pressure corresponds to the triple point of water, and it is about 0.6% of the sea level surface pressure on Earth (0.006 atm).126 In practice, today this surface is defined directly from satellite gravity measurements.

Question: For Mars' areoid and geoid (if there is one) or gravitational zero elevation datum:

The areoid is simply the Mars analogue of the geoid. It's not clear whether the zero elevation level discussed by Zeitler et al. (referenced in the question) is actually a geoid. A more recent paper by Ardalan et al. (2010) defines the geoid using geodetic and gravitational measurements. It is the gravitational equipotential that best fits the shape of Mars in a least squares sense.

The Mars geoid is remarkably similar to Earth's. Both are close to the ellipsoidal shape expected of a rotating fluid (in the case of Mars, this accounts for 95% of the deviation from a sphere). The image below, from Smith et al. (1999), shows what is left after this part is subtracted. There are a couple of highs over dense masses located deep under the surface, at the boundary between the iron core and the silicate mantle. On Mars, one of these masses is under the Tharsis topographic bulge. Major volcanic features such as Olympus Mons, Alba Mons and the Elysium volcanic province are also located above these features. Earth also has a couple of large dense masses near the core-mantle boundary. See Why are the Geoid and the Areoid so Similar? 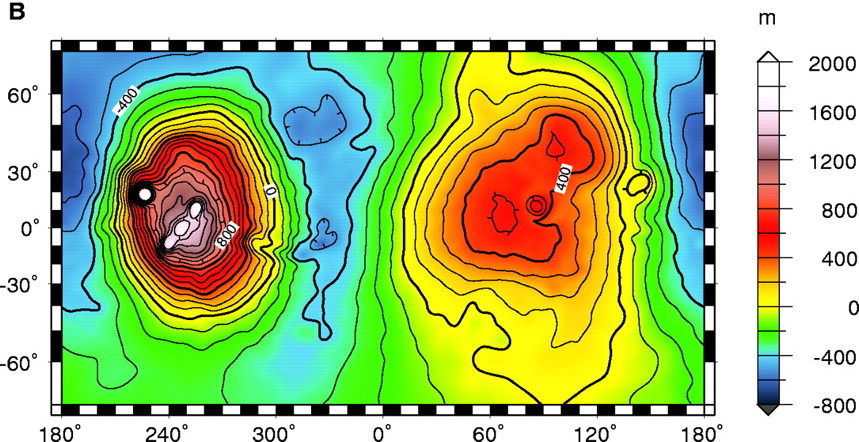 Not the answer you're looking for? Browse other questions tagged mars gravity atmosphere planetary-science or ask your own question.

12
Boiling ponds and pools on Mars?
4
What's the deepest a trench could theoretically be dug on Mars?

9
How strong a magnetic field does Mars need to contain Earth-like atmosphere?
9
Are the Mars elevation data publicly available?
4
Sunroofs on Mars - durable transparent structural plastics lighter than glass to ship from Earth?
10
How much elevation has Mars Curiosity climbed so far from the bottom of Gale crater?
16
Does the Curiosity rover really have a chance of driving to the top of Mt. Sharp?
7
How much does pressure on Mars change with weather?
4
Level of radiation on surface/ocean of Mars AFTER terraforming