How are physical attitude indicators actuated?

The Apollo FDAIs and shuttle ADIs (pre-MEDS) indicated spacecraft attitude with an actual ball that was spun around in a cage. I've seen photos of some of these removed from their cases, but everything is so tightly packed, it's difficult to see how it actually works.

My question: given the necessity of its ability to indicate attitude over three dimensions, how was the ball actually moved and positioned?

Let's look at what is displayed on a spacecraft attitude indicator. The ball itself only displays two axes: pitch and yaw. Roll is displayed by a triangular "roll index" marker that moves around the circumference of the display; it is not on the ball itself. The angular velocity around each axis is displayed by three "rate needle" meters around the perimeter of the instrument: pitch to the right of the ball, yaw below the ball, and roll above the ball. When there is a target to reach, three orange-yellow "error needles" show the error between the desired and actual angles in each of the three axes. 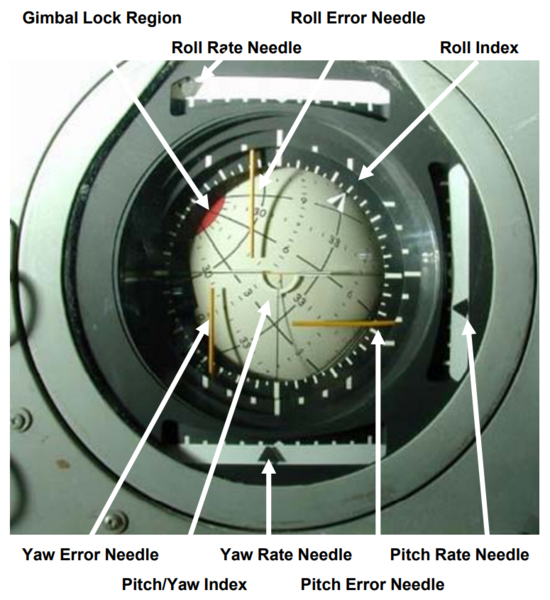 Gemini, Apollo, and the Space Shuttle used gyroscopes to measure the spacecraft orientation. (For redundancy, there was more than one gyro.) However, it is important to understand that these gyros were completely separate devices external to the attitude indicator. There is no spinning gyroscope inside the ball of a spacecraft attitude indicator.

The gyros in the Apollo CM and LM output analog signals that represented the gimbal angles of these gyros. These are the gimbals that were susceptible to "gimbal lock". The analog signals of the gyros were displayed on some meters below the attitude indicator, and also fed into two automated systems:

Inside the attitude indicator are three servo mechanisms. A sensor measures the angle of an axle, which is compared to the analog signal. The error between the two drives a motor which spins the axle to the intended angle:

Spacecraft orientation with respect to a selected inertial reference frame is also displayed on the attitude indicator ball. This display contains three servo control loops that are used to rotate the ball about three independent axes. 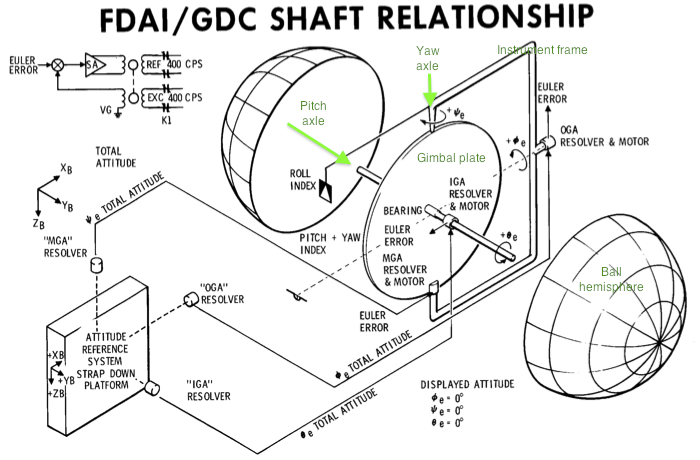 The roll servo turns the ring around the circumference of the display.

The yaw servo is affixed to the frame of the attitude indicator, turning a vertical axle. In the middle of this axle is a gimbal plate, and the pitch servo is attached to that. Electrical connections to the pitch servo must pass through slip rings on the yaw axle:

The pitch servo turns an axle with the two hemispherical shells of the indicator ball. There is a gap between the two hemispheres; this is necessary for the yaw axle to clear. You can see the gap here: 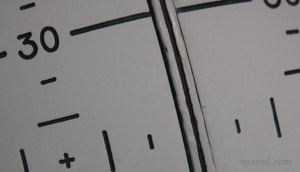 Because there is only one gimbal, and because slip rings are used for the inner connections, the attitude indicator is not capable of gimbal lock. The ball can turn any number and combination of turns in the yaw and pitch axes without binding up. Gimbal lock was an issue with the gyroscopes, not the attitude indicators. However, a red region corresponding to the gyro gimbal lock was painted on the ball.

Prior to the MEDS makeover, the Shuttle simulators used refurbished Apollo attitude indicators (compare Apollo and Shuttle). The electronics and much of the mechanicals were redone, allowing the ball to roll with the roll index. Because the Shuttle's gyros were not susceptible to gimbal lock, the red region was painted over:

Also note remnants of the roll gimbal lock red warning zone between the 255 and 285 degree index lines, which has also been painted over in black.

Not the answer you're looking for? Browse other questions tagged apollo-program space-shuttle attitude instrument or ask your own question.

5
"LVLH" on Challenger's cockpit voice recording: What was that switch for?

0
Why are two frames of reference needed for attitude determination?
8
How fast can the space shuttle change its attitude in space?
16
How does a single SRB control attitude?
5
Are robot arms ever used for attitude control in space?
4
How would the shuttle perform various attitude changes during ascent?
5
How exactly was Apollo CSM attitude changed (from a current one to a new required one)?
3
Rocket dashboard: separation/pyro indicators