Is there such thing as plasma (from reentry) creating lift?

The following was claimed on the aviation site:

In 1981, after years of development and testing, Columbia made its maiden voyage into orbit. Unexpectedly, on re-entry, the nose pitched up much higher than planned. Quick thinking and deployment of the airbrake beneath the rear fuselage (but not the vertical stabilizer "clamshells") prevented potential disaster.

It was later determined that the extreme heat of re-entry at 17,500 mph ionized the atmosphere underneath the nose of the Orbiter enough to torque it upwards more than even the pitch stabilizing influence of the delta wing could handle.

If it does and it's a true story, why would it nose up the Shuttle? The reentry videos I've watched from inside the orbiter, looking from the zenith windows, seem to suggest the plasma is more near the aft, so if it does create lift, wouldn't that be a nose down?

This appears to be a garbled recounting of a problem that occurred during STS-1 entry due to a mis-match between predicted and actual hypersonic pitch trim. 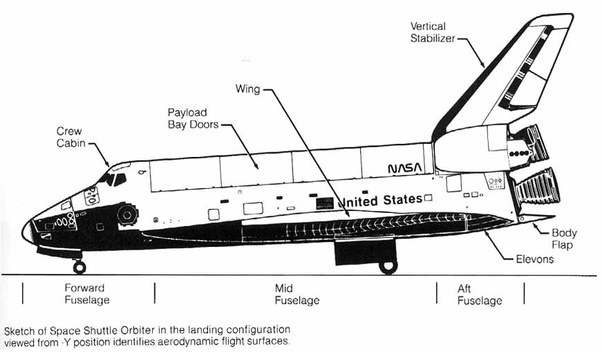 All that happened was that the body flap (see aft of Orbiter on diagram) extended 5 degrees more than predicted (which did cause the body flap to see higher heating than predicted as well). There was no "quick thinking" - the body flap was placed in automatic mode when the Orbiter entered the sensible atmosphere - and it was not an "air brake" - it was a pitch control device and a heat shield for the main engines.

At a dynamic pressure of about 0.5 lb/ft2, the body flap was positioned to automatic. Elevon body flap interaction was normal. The body flap automatically positioned itself to about 80 percent and appeared to remain there down to about Mach 15. The elevons were within their trim limits.

(p. 137, emphasis mine - note 80 percent on the gauge corresponds to ~15 degrees, see final diagram in answer)

The commander didn't start flying manually until Mach 4.8 (roll/yaw) and Mach 2.5 (pitch) (p. 138) and even that was temporary. He gave control back to the computers until the vehicle was subsonic and approaching the Heading Alignment Cylinder. 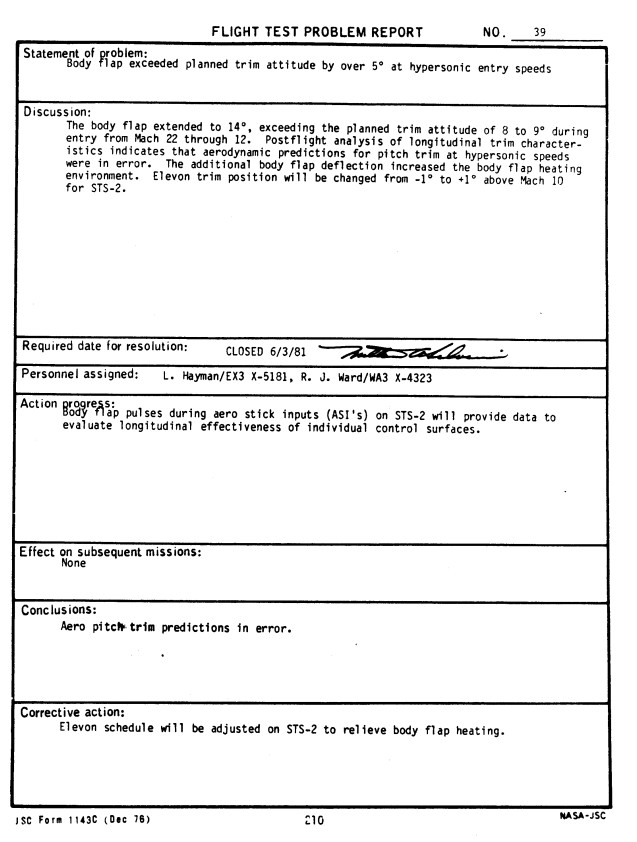 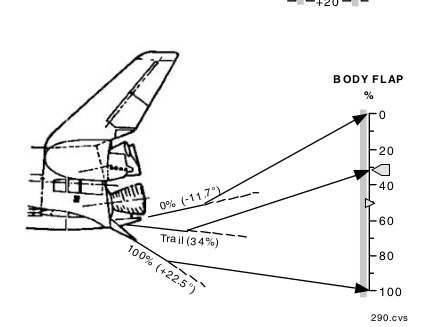 Not the answer you're looking for? Browse other questions tagged space-shuttle reentry shuttle-columbia plasma or ask your own question.

5
Would plasma sheathes from reentry heating block optical/UV communications as well as radio?
13
Is there real footage of Tiangong 1 reentry?
7
Two-step reentry from Moon/Mars
27
What were the differences between the STS Orbiters?
2
Is there any video footage of a full reentry?
2
Help understanding vectors in diagram from "Magnetohydrodynamic flow control during reentry" and the actual goal of this research
1
What are, and what has been learned from making plasma crystals in space? Is a tl;dr-like answer possible?
3
Soyuz: Do you know the coefficient drag and lift to drag ratio are during reentry?