Did Feynman cite a fallacy about only circles having the same width in all directions as a reason for the Challenger disaster?

In a Math Overflow post about mathematical fallacies it was stated that:

Richard Feynman regarded the mistake that a "circle is the only figure which has the same width in all directions" as one reason for the space shuttle Challenger disaster.

I haven't been able to find any references to this myself. Is it an accurate statement and if so, what is it referring to?

This was indeed an avenue of investigation for Feynman. From his autobiographical book What Do You Care What Other People Think?:

Then I investigated something we were looking into as a possible contributing cause of the accident: when the booster rockets hit the ocean, they became out of round a little bit from the impact. At Kennedy they're taken apart and the sections... are packed with new propellant... During transport, the sections (which are hauled on their sides) get squashed a little bit - the softish propellant is very heavy. The total amount of squashing is only a fraction of an inch, but when you put the rocket sections back together, a small gap is enough to let hot gases through: the O-rings are only a quarter of an inch thick, and compressed only two-hundredths of an inch!

He then describes the procedure used to ensure the roundness of tanks, which was to check that the diameter was consistent at different angles around the tank - but then notes that this does not guarantee roundness, an arbitrary shape can have the same diameter at multiple different points, and there are even non-circular shapes that have a consistent diameter at every point.

Having tank sections slightly out-of-round may have contributed to the O-ring failure, and the method they used to ensure roundness was not theoretically sound, as it relied on an incorrect assumption that a circle is the only shape with a fixed diameter at all points.

In addition to Nuclear Wang's answer, Feynman also mentions this during a PBS Newshour interview with Jim Lehrer.

While he doesn't directly mention the mathematical fallacy, he describes how the width-preserving properties that's usually observed in the automobile industry usage of o-rings, does not necessarily hold true, and how this affected the shuttle.

Here is a diagram of the Circumferential Alignment Tool that was used during stacking when the SRB segments were "severely" out-of-round. 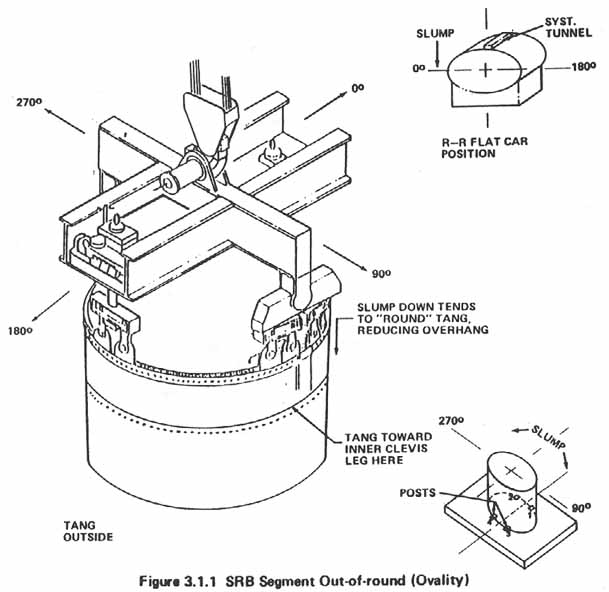 This diagram is from Volume 2 Appendix L of the Rogers Commission Report, the report of the STS 51-L Data & Design Analysis Task Force Accident Analysis Team.

There is a lengthy writeup in Volume 1 Appendix C describing the out-of-round problems and the use of the tool in an attempt to correct them.

Not the answer you're looking for? Browse other questions tagged space-shuttle shuttle-challenger or ask your own question.

29
Did the Challenger SRBs fail due to design for reuse?