There are several reports in the news that the Juno spacecraft executed a very long propulsive maneuver so that it wouldn't pass through Jupiter's shadow. Apparently it would be in dark so long that the batteries would die before it returned to sunlight, and that was considered somewhere between risky and fatal.

Last time I checked which is about two years ago, Juno was in a highly elliptical, near-polar orbit.

So how did this maneuver allow Juno to avoid Jupiter's shadow (presumably at apoapsis?) Was it basically a plane-change, rotating the vertical orbital plane from one side of the shadow to the other, or was it something more interesting?

Either way, if it's possible say "by how much" the orbit was changed in some way circa October 2019, that would be good to know. 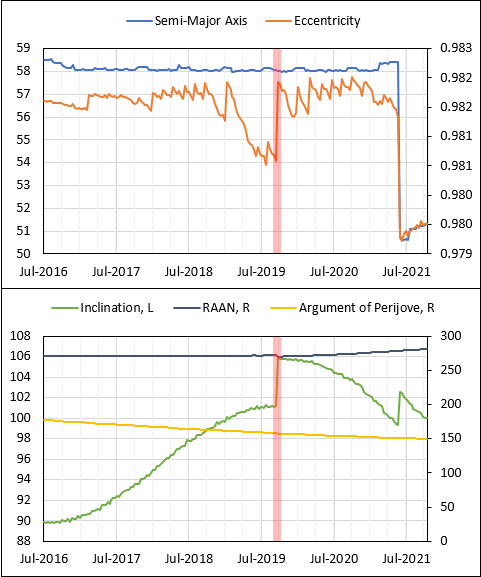 The change in inclination is about 5°.

For the 53-day trajectory, solar eclipse avoidance is achieved via a series of apojove maneuvers – up to and including APO-21 – to ensure that the spacecraft does not enter eclipse inbound to PJ-22. Then, at APO-22, a large, 50-60 m/s, maneuver is leveraged to change the orbital plane geometry – including an inclination increase of 4-5 degrees – and avoid eclipse entry inbound to PJ-23.

4
If Juno's long orbit means a lower rate of radiation damage, why the planned short orbit?
4
Are there fuel cells for methane + oxygen? Could there be?

4
Would lunar flyby be less costly in delta-v than direct change from ISS's to Hubble's orbit?
9
Is there any publicly available logging, or "Wayback Machine" for DSN Now activity?
6
The plane of the orbit of Juno around Jupiter is not the ecliptic plane. How did it get into this plane?
2
Why would Juno's originally planned orbit lowering partially mitigate radiation damage?
4
JPL Horizons original reference orbit data for Juno - how to retrieve now that it's been updated?
4
If Juno's long orbit means a lower rate of radiation damage, why the planned short orbit?
5
How does not orbiting Europa maximize Clippers coverage of Europa for a given radiation dose?
7
How exactly did Jupiter change Ulysses orbital plane from nearly ecliptic to polar?