What are the pros and cons of Doppler radar versus Doppler lidar?

Are there advantages and disadvantages to each, such as sensitivity, power, range, etc.?

Note: There has been some confusion among answerers about the type of sensor I'm referring to. A Doppler LIDAR (example) is not the same as a LIDAR. Whereas a LIDAR typically has a single beam that scans or simultaneously shoots lasers at many points (returning a point cloud), a Doppler LIDAR usually has only a few beams which are aimed in fixed directions. A LIDAR returns only the range to each strike-point. A Doppler LIDAR returns the range as well as the range-rate of the strike-point. I believe the same is true for Doppler radar.

NOTE: This discusses autonomous car sensors but the same physics will apply to any longwave vs. shortwave sensor comparison (cost being the wildcard)

An interesting parallel is Tesla Inc.'s decision to use radar as the active component for their autonomous driving system rather than (much more common) LIDAR. My recollection of the costs/benefits of radar over LIDAR given by Tesla Inc. CEO Elon Musk in several interviews/speeches are

Photons of [radar's] wavelength travel easily through fog, dust, rain and snow, but anything metallic looks like a mirror.

A discarded soda can on the road, with its concave bottom facing towards you can appear to be a large and dangerous obstacle

As for spacecraft landing systems, they may be operating in varying environments and need the system that suits their specific situation.

I would imagine an ideal system would use radar for the high altitude portions of a descent and LIDAR for final landing maneuvers.

The quotes from Mr. Musk were taken from his blog post at https://www.tesla.com/blog/upgrading-autopilot-seeing-world-radar

Below are two articles discussing the described differences in further:

Especially interesting is the following picture from article 2 showing the difference in resolution between LIDAR (whose frequency is near the visible spectrum) and radar. 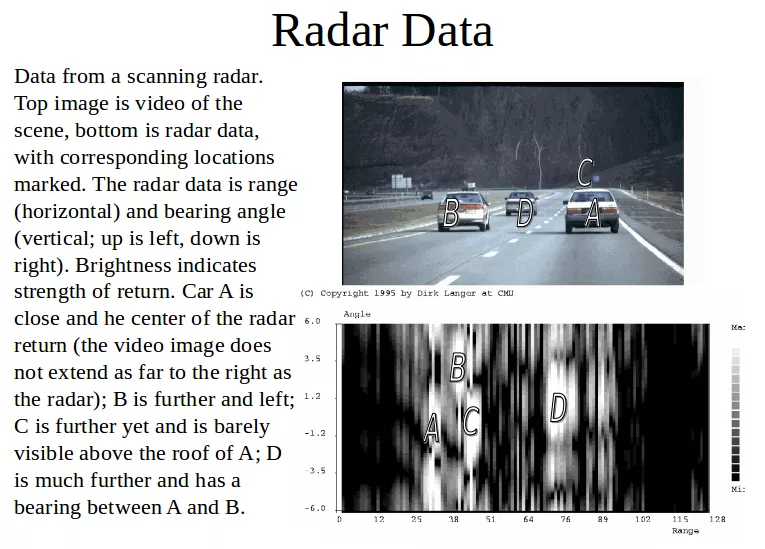 I think you mean to ask the question about LIDAR as used for velocity measurement in spacecraft rather than the LIDAR used in autonomous vehicle. Here, I list some few points relating to both altimeters and velocimeters both.

Note: I am unable to find source for information as these points are by experience than actual source. So take it with grain of salt.

Not the answer you're looking for? Browse other questions tagged radar doppler-ranging or ask your own question.

10
What type of onboard radar did the Surveyor landers use?

10
What type of onboard radar did the Surveyor landers use?
12
Why was the 100m Green Bank dish needed together with DSN's 70m Goldstone dish to detect Chandrayaan-1 in lunar orbit?
4
Is delay-doppler radar imaging of NEO asteroids possible only if it spins fast enough?
6
How does a three-way doppler shift measurement work?
2
What are the trade-offs to use a radio relay orbiter also as a radar science instrument?
0
What are monostatic radar observations, and how will Deep Space Network's DSS-13 be used to observe asteroid 1999 WK4's flyby of Earth?
4
How does Deep Space Network's DSS-14 transmit radar and receive it at (almost) the same time? (monostatic radar)
1
What are the differences (if any) between the techniques of range-rate and delay-doppler measurements?