What are the consequences of Vertical vs Horizontal integration for SpaceX?

One of the issues the Air Force has with using SpaceX as a launch provider is that their payloads are designed for vertical integration. That is, the booster stands on the pad upright, and the payload is attached atop it.

Falcon 9 and Falcon Heavy are integrated in the hangar, horizontally, that is, lying on its side.

What are the consequences to changing this approach?

The primary issue with SpaceX's horizontal integration approach is that the payload has to be able to be rotated.

The primary costs of horizontal integration are the transitional equipment - essentially, a tilt-table the length of the assembled rocket. The rocket itself isn't designed for carrying the horizontal load itself, but is designed with some minimal extra structure to enable the rotation and the use of the horizontal support. Since the rocket has to be shipped in this orientation anyway, it's not a major cost issue, and the rotation has to happen at some point.

The benefits of the horizontal integration, especially for the payload attach, are that the clean environment is maintained near the floor, and it is possible to use entirely non-crane based materials movement. This reduces structural overhead, and risk to staff. A 3 m fall is a far different beast from a 50 m fall. This means dropped tools, falling staff, and other incidental mishaps have far less risk. Likewise, a crane is many potential points of failure more than a modified forklift. (SpaceX does use cranes for some activities; they don't take full advantage of the potential, because certain activities are easier by crane.)

The drawbacks, however, are that the payload must be able to maintain it's integrity both in the mating position and in the launch position, as well as all the points between. This is mostly risks to sensors, antennae, and solar panels; most of these can be designed for the transition at minor cost in mass, and in the case of sensors, adding covers for during the mating process.

The benefits of vertical integration are that the payload can be very slightly reduced in mass, and slightly reduced in complexity, but at the cost of working 50+ meters above the ground, and everything needing to be hoisted by cranes or special elevators. Further, the work environment creates a high velocity impact with dropped tools, and there is additional structural mass for the clean work area at altitude.

Movement to the pad.

Horizontal mating also allows for horizontal movement - SpaceX can move the assembled rocket horizontally, and erect it onto the pad, rather than moving it in vertical position. Horizontal transfer is more stable and easier to manage safely.

It is well worth noting that the rockets are generally not fueled until after payload mating. This is true for many rockets, not just dragon. SpaceX Notes that they only fuel the vehicle for the Wet Dress Rehearsal and Launch day, and detank the fuel between them; it's already on the pad vertically.

Note that the dragon capsule is loaded in vertical orientation; in theory, this could be done after mating, but that would require craning of the aeroshell into place. 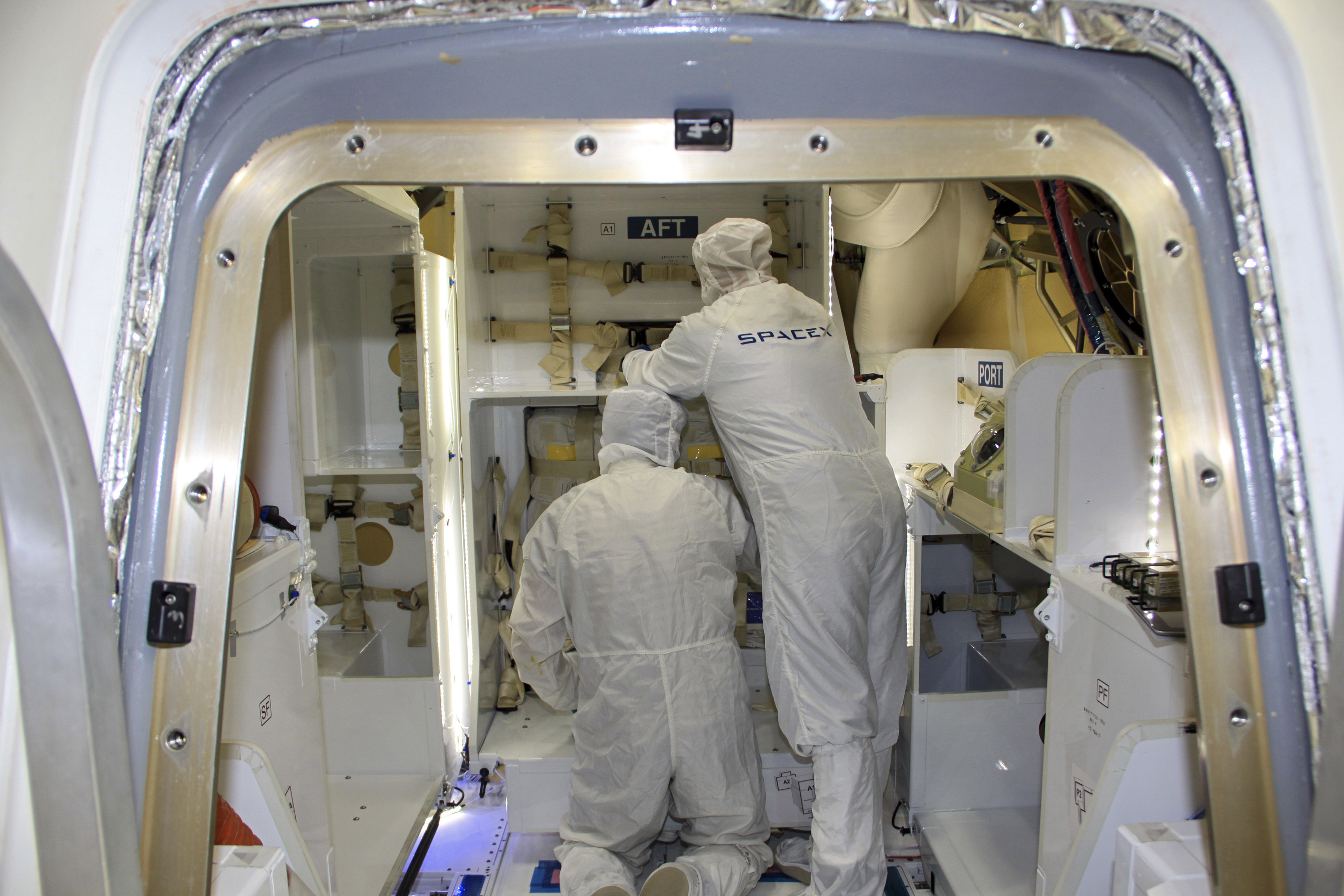 The Dragon C2 was mated to the trunk vertically prior to horizontal integration with the Falcon 9 launch vehicle. The assembled mission is in a low-slung hangar. This hangar is a lower cost structure due to reduced load on the members than a vertical one. Further, note that the structure is wide enough for the Falcon 9 heavy - it's about 5x the width of the assembled falcon 9 vehicle, and the Falcon 9 heavy is about 3.4x as wide.

Further note: the Dragon 2 manned capsule is designed for passenger loading in vertical mode on the pad. Loading it prior would be difficult, given the seating. Dragon 2 interior http://www.spacex.com/sites/spacex/files/v2_seats.jpg

With vertical integration, the payload force is absorbed in the same direction as the launch forces, so you only need to make the rocket strong enough to hold the payload in the vertical direction.
With horizontal integration, that the rocket needs to be built to withstand the bending load of the payload when the rocket is horizontal. This generally means a heavier construction. Rockets are built as lightly as possible. Some rockets can only support their own weight when the fuel/oxidizer tanks are pressurized.

Vertical integration in an assembly building also means you need to transport the stack vertically to the launch pad. This is doable in mild climates with plenty of warning for bad weather (Cape Canaveral). Baikonur, for instance, has high winds so often that transporting the stack vertically is not feasible.

Source: "N-1 for the Moon and Mars, a reference guide to the Soviet superbooster"

One thing I thought of would be the need for an enclosure at the pad.

Shuttle used the RSS (Rotating Servicing System) that was a monstrosity of a thing that covered the entire cargo bay, while on the pad, provided environmental control. As you can imagine, not a cheap structure, that had to survive being fairly close to 7 million lbs of thrust as the shuttle took off.

Ariane 5 and Delta have a structure like the upside down letter U that rolls over top the has doors that close to enclose the vehicle.

Thus building one of these (which actually SpaceX destroyed at LC40 at CCAFS when they took it over) would be a cost.

Not the answer you're looking for? Browse other questions tagged launch spacex falcon-9 falcon-heavy ula or ask your own question.

5
Why did SpaceX choose vertical integration for Starship?

7
How does SpaceX manage parallel processing at the LC-40 Complex?
12
How many 1st stage boosters will SpaceX settle for, for its LEO/GTO fleet?
11
Could the solid boosters of SLS be replaced by reusable Falcon 9 first stages?
19
On the Falcon Heavy, why are the side boosters using Ti Grid fins, but not the center core?
8
How will they lower the landed side boosters after landing, if there is a nose cone?
28
Why the soot pattern on the nosecone of Falcon Heavy side booster?
4
Is vertical assembly worth the cost (Ariane 6)
11
Why would someone need vertical loading for a SpaceX rocket?
5
Why did SpaceX choose vertical integration for Starship?