Why would oxygen be stored as a super critical fluid?

Organic Marble just answered a question about Apollo 13 in terms of the storage of Oxygen, and posted some fascinating stuff, including the fact that Oxygen was stored as a super-critical fluid.

I was just wondering what the benefits of storing Oxygen as a super-critical fluid were and why this was done for Apollo 13? As a follow-up question I was also wondering if this is still the standard for storage of Oxygen?

The same system was used on Shuttle - allow me to discuss that, the design philosophy applies to Apollo as well (Shuttle deleted the fans though, and had a special Avoid-Apollo-13-circuit in the O2 tanks).

A supercritical fluid is any substance at a temperature and pressure above its critical point, where distinct liquid and gas phases do not exist.

The lack of distinct phases is important for systems like the Apollo and Shuttle cryo systems. The heat transfer properties of gaseous O2 and liquid O2 are quite different - if the fluid was allowed to have gas bubbles in it, hot spots could occur on the heater surfaces adjacent to bubbles, which could be disastrous in the pure O2 environment.

Keeping the O2 and H2 cryogens for the fuel cells at supercritical conditions is a smart design for several reasons. 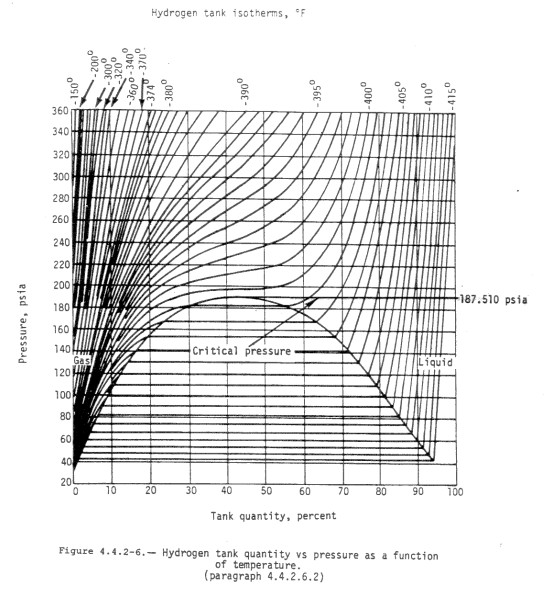 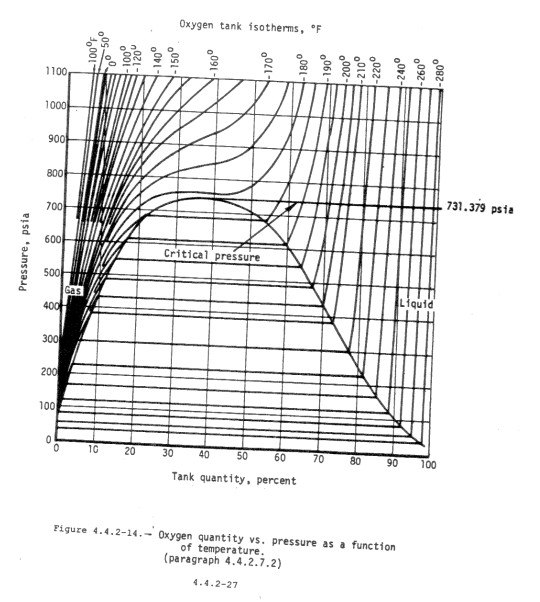 Downsides include having to use power to run the heaters, relatively heavy and expensive tanks - they have to withstand high pressures, and are vacuum-jacketed, and of course, the danger of running heaters in a pure O2 environment.

Shuttle had a special circuit in its O2 tanks to prevent an Apollo 13 type disaster. Sensors measured the current going into and out of the heater panels. If the in- and out- currents weren't very similar, a short on the heaters was suspected, and the heaters were tripped off. 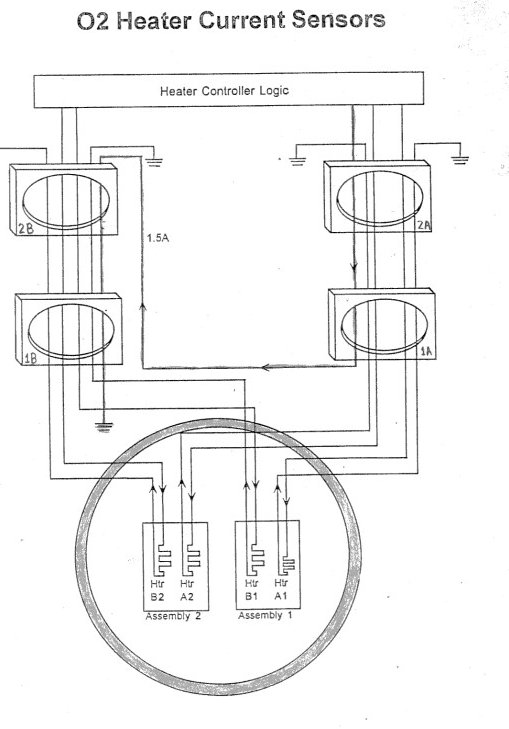 There's a nice description of the Orbiter cryo system in the Press Manual. Here's an O2 tank system schematic from there. 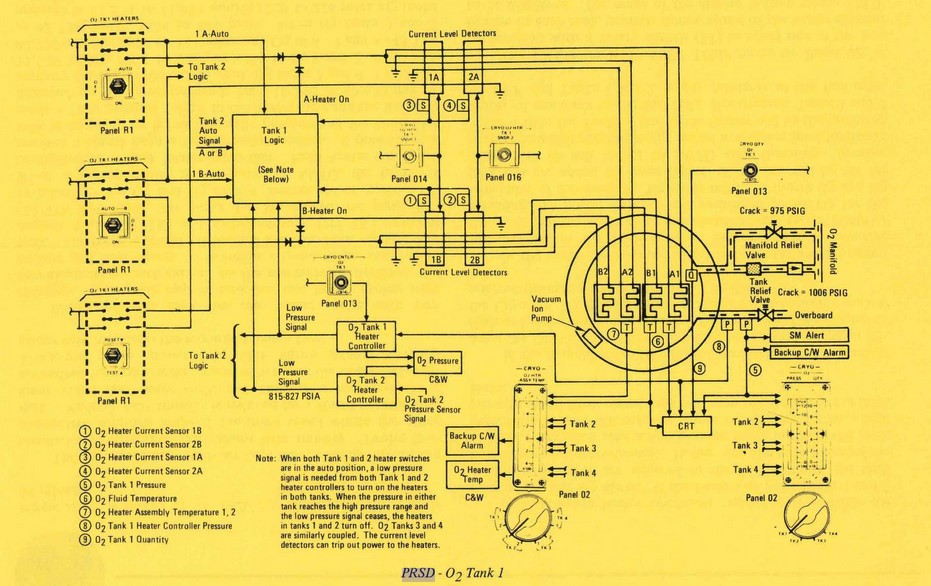 I'm not a chemist but I'll go out on a limb and suggest a way to resolve some issues in comments.

It looks to me as though as long as you are above both the critical pressure and critical temperature at the same time, it's a supercritical fluid; thus the name.

This excellent answer explains that the supercritical phase of oxygen and many other gases can often behaive similarly to a "normal" ideal gas and not be "wonky with all sorts of amazing, bizarre properties." I strongly recommend giving a read! 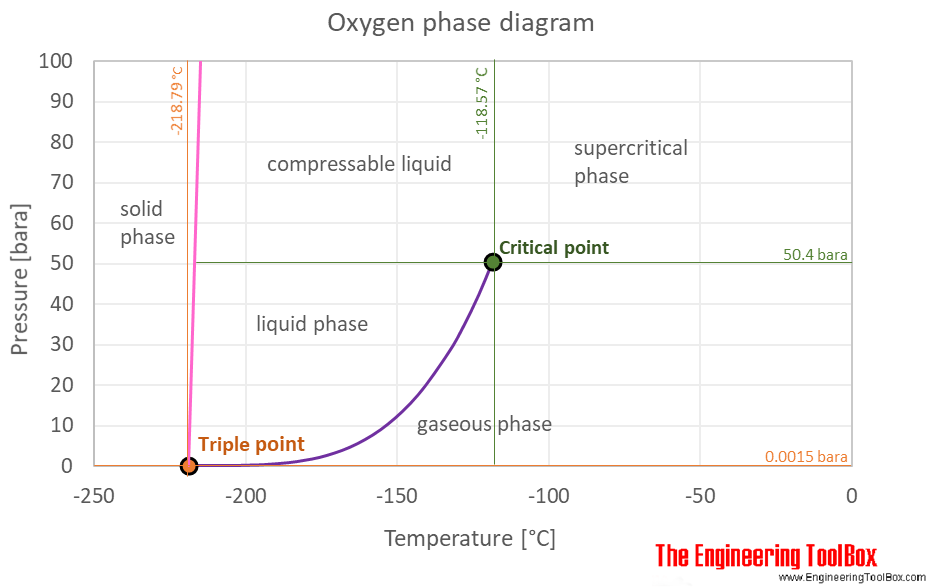 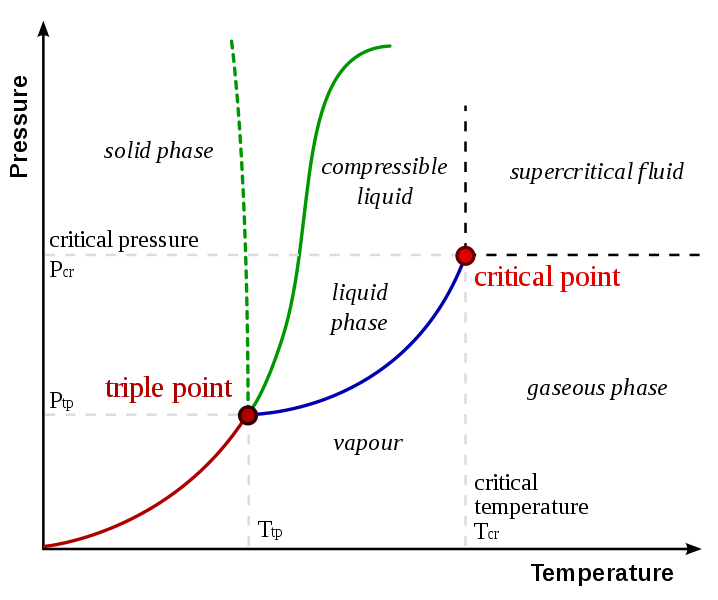 Here's a video of what a liquid + gas phase transitioning to a supercritical state looks like. The line where the surface of the liquid meets the gas just fades away and the color (this happens to be chlorine) becomes half way between the darker liquid and the lighter gas. Pretty cool, especially if you watch how it converts back to liquid + gas at the end!

If you want to store as much oxygen in a given volume as possible, you have to increase the density significantly. There's two ways to accomplish that.

If you don't need to store it for very long (say during a launch), then cyrogenic liquid oxygen has lots of benefits. You get maximum density and the tanks don't have to withstand high pressures.

But for an extended mission, cyrogenic storage is problematic. You either need to have capacity to handle significant boiloff, or you need active cooling systems (which require power, mass, and complexity). The alternative is to let it come up to ambient temperature and put up with the high pressures that requires.

So on a medium-to-long duration mission like Apollo, cryogenic storage costs a lot. That makes the lower density of super critical fluids become an acceptable trade off.

Not the answer you're looking for? Browse other questions tagged fuel oxygen apollo-13 supercritical-fluids or ask your own question.

26
How did sloshing prevent the Apollo Service Module from moving safely away from the Command Module and how was this fixed?
16
What does "stirring tanks" mean?
27
What were the differences between the STS Orbiters?
13
What happens when supercritical fuel tanks deplete below critical point?
7
Loading tanks for supercritical oxygen and hydrogen on the launch pad, how to achieve low temperature and high pressure?
6
How cryogenic oxygen was heated up for CM cabin repressurization?
3
Was there a mechanism to vent fuel cell reactants on the Shuttle orbiter?
4
Are there examples of a spacecraft designed for transitions from supercritical to liquid+gas mixtures?
1
Which fuel cell fuels have been demonstrated in space?

14
What level of oxygen in a planetary atmosphere would be indicative of life?
10
How do rocket propellant combinations rank in terms of "brightness"?
12
Xenon vs Hydrazine, "Should I Stay or Should I go?" Dawn mission decisions
29
Why was ramjet fuel used as hydraulic fluid during Saturn V checkout?
7
Loading tanks for supercritical oxygen and hydrogen on the launch pad, how to achieve low temperature and high pressure?
6
How cryogenic oxygen was heated up for CM cabin repressurization?
10
Why can't cryogenic oxygen and cryogenic kerosene be "stored" together?
1
Which fuel cell fuels have been demonstrated in space?
2
Calculating total burn time for a rocket under constant acceleration with two propellant consumption rates
23
Why aren't spacecraft and spacesuits pressurised to 2.5 psi (17 kPa) of pure oxygen?