How will the crew exit Starship when it lands on Mars?

When SpaceStarship lands Mars, the crew will be almost 50 meters above the surface. How will they get out with all their equipment?

SpaceX has implied that there will be a crew/cargo lift system similar to how skyscraper window washing platforms work (a crane swings the platform out from inside and lowers it to the ground): 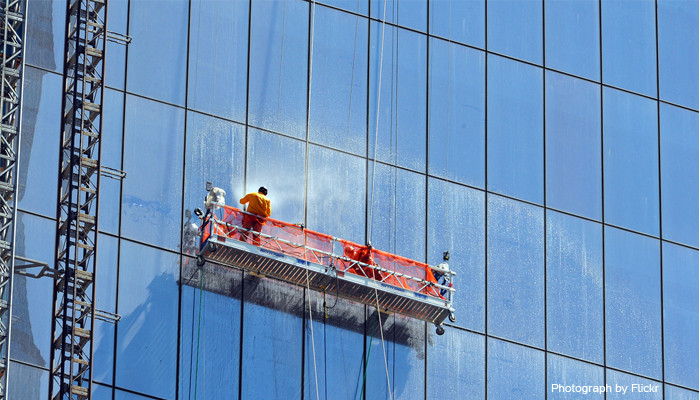 SpaceX teased it at the end of this video from last year:

The design hasn't been confirmed publicly by SpaceX yet, but probably some kind of elevator. One of the mockup drawings showed Starship having a stowed crane for offloading cargo, so it wouldn't be unreasonable to assume they could stick a flat platform with handrails on that.

Picture at 33s into the video:

It would seem elementary to be able to move cargo out of the ship, but it is a technical problem of moving and storage. It occurred to me that besides having a modified gantry lift and automatic machinery as a main moving mechanism, there needs to be manual mechanics to be a backup system. Also, since gravity is so low perhaps a circular slide filled with air would do the trick, winding it's way down to the floor of the Mars surface. Passengers could help unload the cargo bay on top, while others on the ground receive the cargo. Furthermore, there also could be a useful cargo mover, circular, something like those used to move luggage in airports with chain links. It would have to be something simple, because everyone on such a long trip, with all of the hazards involved with their body, may not have the strength or the inclination to move cargo.

Top of starship connects by multiple zip-lines to the habitats, far enough away to be unaffected by the blast off. Cable car (open basket) for cargo on stronger line. Longer lines have smaller slope. Battery powered motors, regenerated by descent. This solves ground transport as well.

Wind at altitude blows much dust off so not tracked inside. Zip lines could terminate beyond habs, or on mast that holds habs up, so commuters can use airlock on Hab's roof, and avoid toxic dust each way. Why walk on the stuff?

Later build redundant zip lines to each Hab (up & down). Zip lines also transmit electric power to Hab at first, ultimately from ground solar array to starship and all Habs connected to it.

Upon landing, first person on Mars rappels down then sets end of first cable at distance for others to ride. "That's one zip for a woman, one long zipper for men". After six months she can finally tell them to zip it.

Not the answer you're looking for? Browse other questions tagged mars spacex-starship or ask your own question.

1
how does the crew deplane/deship to the surface
2
What solution does SpaceX plan so to make it possible for the crew to get out from Starship on other planets, considering the cabin's elevation?

3
Will, or when will, Mars Global Surveyor decay from orbit?
11
Will uncovering the ice deposit in Utopia Planitia improve the climate on Mars?
7
How will SpaceX's Starship accommodate its 100 passengers from the effects of micro-gravity?
27
SpaceX Starship landing on Moon or Mars: why doesn't it fall over?
7
Why don't we use sound suppression system when rocket lands propulsively?
8
How much equipment will be required to mine 600 tons of water ice on Mars?