What are SpaceX's Starship's header tanks?

In the Everyday Astronaut video A conversation with Elon Musk about Starship after about 13:00 Musk shows Dodd a cell phone video that he shot in the top(?) of the SpaceX Starship and explains that there are four 100 kWh Tesla batteries welded to the header tanks.

The batteries power Tesla Model 3 motors which are currently used to pump hydraulic fluid that's used to actuate the flaps.

Per the video, the header tanks contain oxygen and fuel as a "mini version" of the main tanks.

Question: But what are the header tank and what do they provide these liquids(?) for? 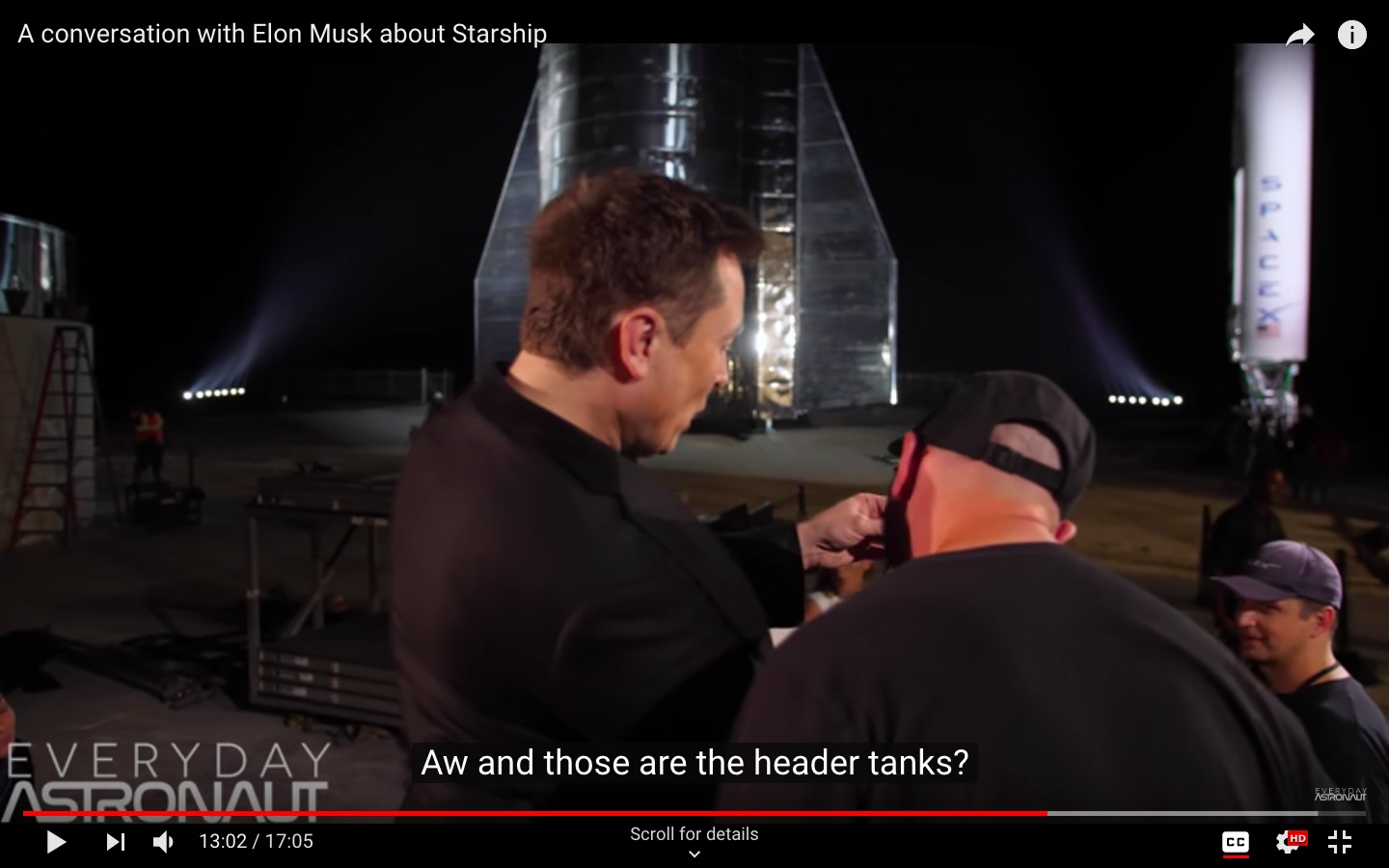 This video shows the tank location and the way they are depleted:

This has been answered before, but I chose not to just mark it a duplicate because there is one new reason for the header tank unique to Starship.

In a Reddit AMA in 2017 where Elon Musk answered questions about the original ITS design, he answered a question about the header tanks:

In other words, if you just leave enough propellant for landing in the main tank, it will slosh around the mostly empty tank, screwing up the handling of the vehicle. And to pressure feed the engines they would be required to keep the main tank pressurized right until landing.

Much better to move the fuel for landing to a smaller tank, run the main tank dry on ascent, and then you have a completely full, much smaller tank to deal with for landing. That strikes me as a much better way to go, and clearly SpaceX feels that way as well.

Musk also mentions that the smaller tank can be better insulated to avoid boil-off of the cryogenic fuel. This is important for the landing fuel, because unlike the main fuel which is gone in a few minutes after takeoff, the landing fuel has to remain in the vehicle until the mission is over and it returns. Why insulate a gigantic tank to protect 10% of the fuel, when you can just insulate a separate header tank?

Now, the new reason for the Starship header tank is that by putting it in the very tip of the nose of the Starship you move the center of mass higher on the rocket - especially during reentry. If the fuel was in the main tank, the weight and balance would be too far aft for the 'skydiver' horizontal return method. So putting a separate tank in the nose of the Starship solves a whole lot of problems at once.

Not the answer you're looking for? Browse other questions tagged spacex identify-this-object spacex-starship tanks or ask your own question.

4
What is the spherical tank in this drawing of the BFS?
6
How (the heck) will SpaceX's Starship's future pressure-fed thrusters work at "any gee’s, any attitude"?
0
Are Starship header tanks used during ascent? And why?

10
How vulnerable could space launch vehicles be to a "lone gunman"?
8
Autogenous pressurization with sub-cooled propellant
12
Could SpaceX's Starship's landing and restart process work on Titan?
13
Why does the Starship methane header tank have so many holes in it?
3
Cryogenic storage in Starship header tanks
12
Why is the LOX header tank on Spacex Starship at the front of the vehicle?
4
Why are Starship's tanks curved the way they are?
2
Pressure inside Starship CH4 and LOX header tanks during entire Earth-Mars trip and landing on Mars?